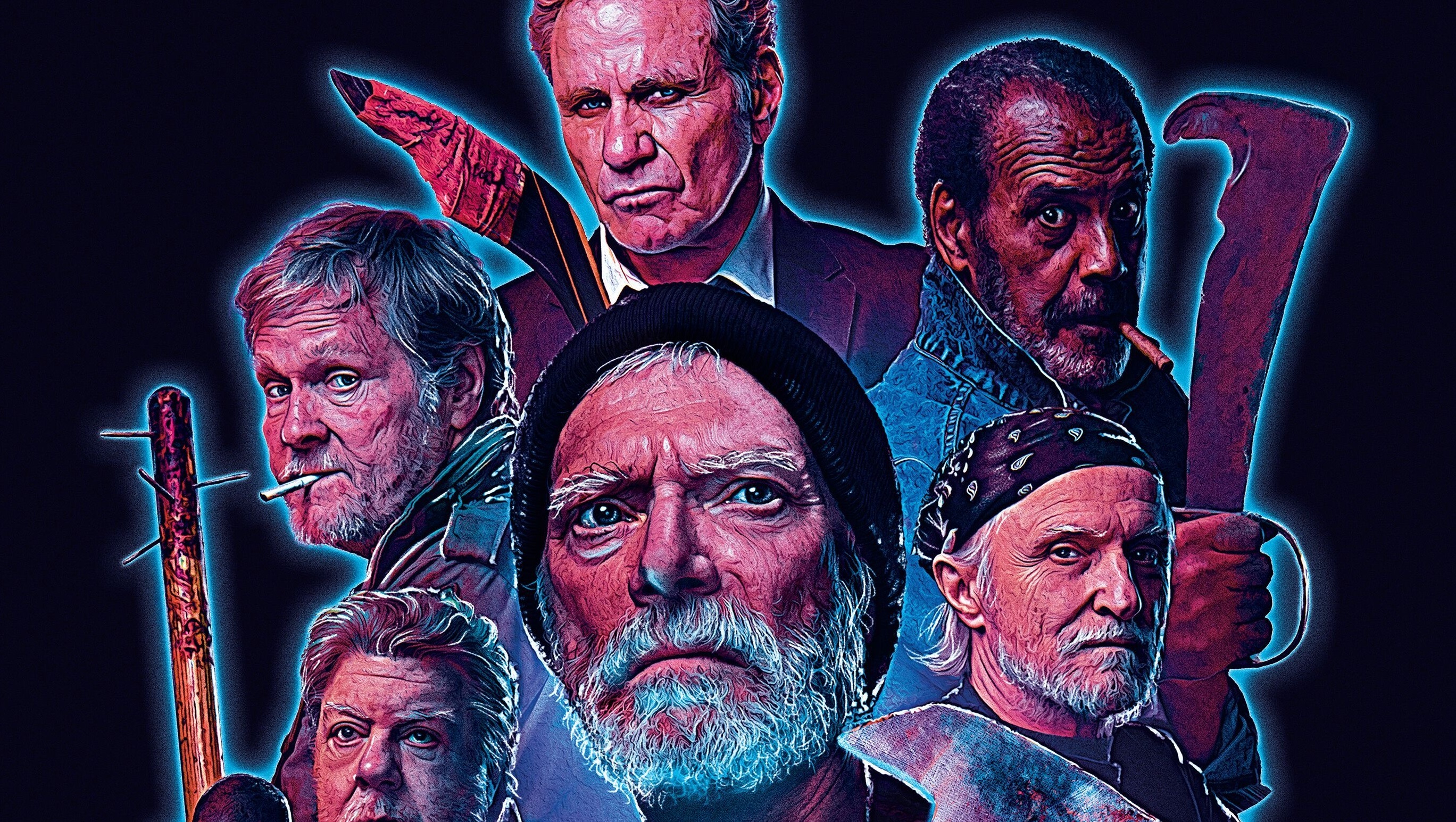 VFW is the type of film that Hollywood doesn’t make anymore.  Down and dirty, low-fi, don’t give a fuck B-Movie Actioner.  Director Joe Begos armed with a game cast, visual style to spare, and a pulsating score ascends to another level.

Fred (Stephen Lang) runs the local VFW that’s a safe haven for his group of fellow Vietnam and Korean war vets.  Walter (William Sandler) is his right-hand man in ‘Nam and now.  Abe (Fred “The Hammer” Williamson) his steady friend.  Lou (Martin Kove) a vet done well for himself as the owner of a Used Car lot.  Doug (David Patrick Kelly) the wily pot-smoking rascal.  Z (George Wendt) as the “Norm” of this VFW.  These gents would be enough in a Mamet or O’Neil play but this isn’t that type of film.  Not unless Zombified Punk Druggies and their Kingpin (Travis Hammer) are after a one of their own (Serria McCormick) has stolen a cache of their drug of choice, is Mamet or O’Neil’s current forte.  As the young lady unwittingly puts herself between the Punks and Vets it becomes a showdown between youth and age.  Can these thrown away old men stand up to these vile gutter punks?

Director Joe Begos has been leading up to this film since his Almost Human.  The one-two combination of VFW and Bliss (and entirely different type of film) have proven that Begos is not just a director in search for a Marvel Project but one that takes Genre Filmmaking seriously with a Capital “S”.  VFW is a siege film that like the best of the best is cut as lean as humanly possible.  Untethered by too much plot, the film moves in the way that cinema as a visual medium should; fast as fuck.

Begos and editor Josh Either create a film that begins with an unrelenting pulse and never lets go until the final frames.  There is an art to this kind film that has been lost.  Lo-fi, low-budget action cinema is something that takes a true artist to raise it above the doldrums of the VOD trash that populates this sector of filmmaking.  Begos, his cast and crew are just the sort that take this seriously. They care enough about film as art to put in the work, blood, sweat and tears to create a movie elevated beyond the what’s become the standard.  Way beyond the standard.

VFW is the sort of throwback that never feels like its cashing in on our goodwill towards other director’s previous work.  Joe Begos and Company have created a film visually arresting, hard hitting, and best of all a can of whup-ass entertainment.  This B-Movie Crowd-Pleaser is to be watched at Midnight with your favorite snack, libation and friends.

VFW is now on VOD and in Theatres