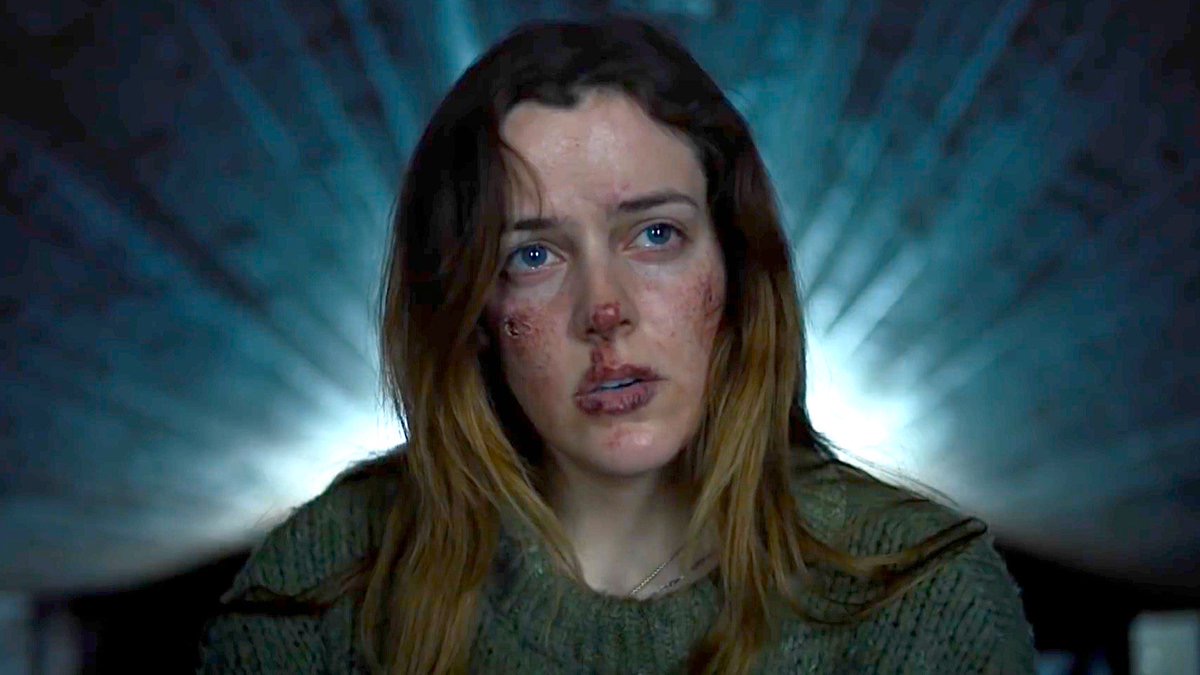 Kristen has strong feelings about Severin Fiala and Veronika Franz’s newest directorial effort The Lodge and its star Riley Keough.

When Ari Aster’s Hereditary came out in 2018 it caused fervid response for both critics and audiences regarding its treatment of grief, depression, and horror. It’s emphasis on tragedy building to more tragedy left many saying it wasn’t a movie to enjoy, but to endure. And it is this familial tale that holds the greatest influence over Severin Fiala and Veronika Franz’s new feature, The Lodge. Similar in tone to Aster’s Hereditary where it diverges in its examination of women, gaslighting, and the mistrust that comes out of divorce. Fiala and Franz create an oppressive atmosphere and taut story you’ll think about days later.

Mia and Aiden (Lia McHugh and Jaeden Martell, respectively) are struggling in the wake of their parents separation and their mother’s suicide. When their father, Richard (Richard Armitage) requests the kids spend Christmas in a remote mountain cabin with his fiancee, Grace (Riley Keough) while he works, the two reluctantly go. As all three struggle to coexist a series of bizarre events puts everyone on edge, especially Grace.

The Lodge is a story of mistrust; the mistrust that develops between former spouses, the mistrust that exists between children and their parents, even the mistrust that comes from a new couple. And within this is the belief that people, most significantly women, must hide their anxieties to be perceived as normal, fun, sexy. The film’s opening scene violently explicates this as we meet Alicia Silverstone’s Laura, Mia and Aiden’s mother. As she drives them to visit their father the camera captures her attempts to keep her emotions in check, whether that’s trying not to put on too much lipstick for her encounter with her estranged husband to the quick smile she feigns when he tells her they’re really done. Her actions start the movie off with a bang, literally, and while this moment is shockingly graphic it’s really one of the few scenes in a movie that eschews outright gore and grotesquerie for more pendulous, overwhelming feelings of dread and anxiety.

Fiala and Franz blend different narrative conventions, from The Shining’s snowbound isolation to the fear children exhibit when they’re alone (like in Shadow of a Doubt or Pan’s Labyrinth). What is different is the overall sense of control the various characters have. Richard, who wins the award for worst dad on-film, has no problem leaving his two children with a woman they’ve never met. But it’s apparent Aiden and Mia have their own preconceived notions of who Grace is, hearing what their mother has said – are these statements true or the angry exclamations of a divorcee who’s seen her husband move on? – as well as the knowledge that Grace was the lone survivor of a notorious religious cult. Once the three are stuck with no one it becomes a battle of wills. Aiden and Grace immediately butt heads, the natural result of a teenager disliking his father’s new girlfriend, but there’s an added air of building tension.

The script utilizes the film’s one location to great effect, creating a turning point where the audience is left in the dark like the cast. Ambiguity starts to build with the audience questioning everything, including a second-act reveal that will make or break the movie for you. Throughout it all the strength of the three leads dominates, particularly that of Riley Keough. Keough’s performance here eschews the theatrics you’d commonly find in a movie about a woman struggling with her emotions, her fears, and possible mental illness. Her issues are internal, the fear of a woman who doesn’t want to appear emotionally unstable, not only to two children left in her charge but two children who will report to their father about her. Her chemistry with the children is sweet, but the true moments she shines are when she’s alone, grappling with her fears about religion and death. And make no mistake, this is a movie all about our collective fear of death. Grace’s desire to have faith on her own terms leads to a series of horrors that manifest that are relatable and frightening, more so as the audience is left to wonder what’s real and imagined.

To discuss much more is to hinge on spoilers and this is a movie it’s best to enter as coldly as the mountain climate. At times incredibly hard to watch, The Lodge is a film that shrewdly examines our issues with each other and with the world that, hopefully, exists beyond us. A contender for most haunting feature of the year.

The Lodge is in theaters February 7th