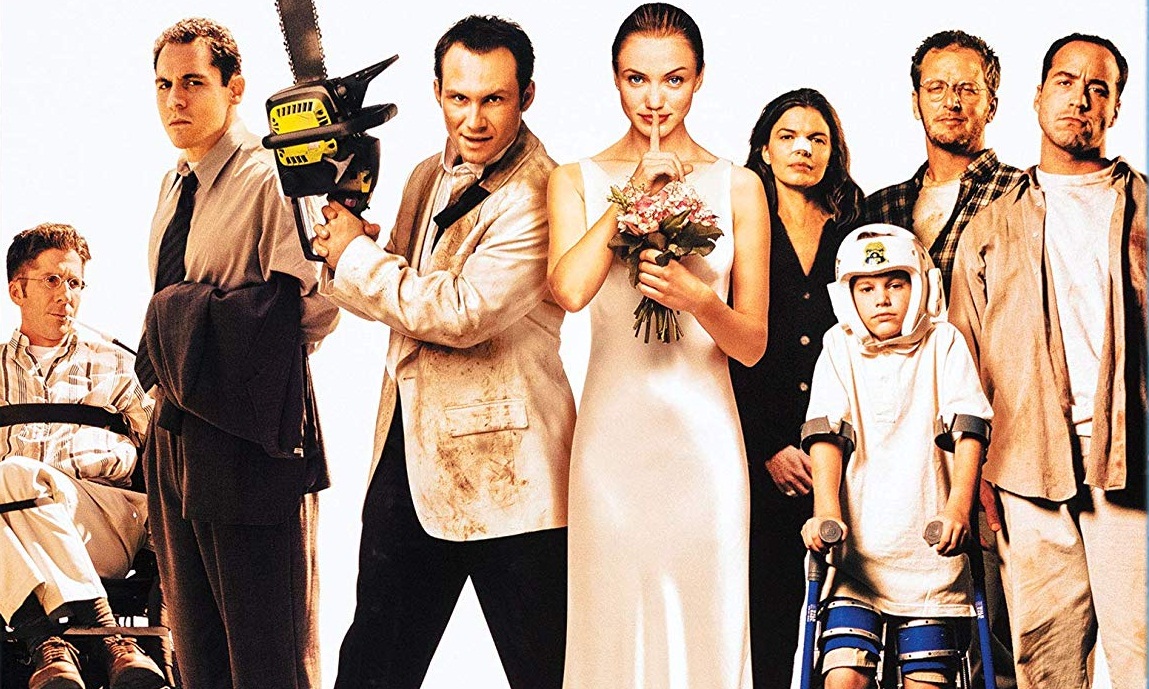 Sometimes a film needs to rest to come full circle.  The pitch-black comedy Very Bad Things did not sit well with most critics when it debuted in the fall of 1998. Peter Berg wrote and directed this film that felt too close to the male toxic environment that reigned supreme in the late 90s.  So much so everyone attempted to bury the film in the desert sight unseen.  Berg was so gut-punched by the experience he went off to make flag-waving action extravaganzas in its wake.

A Bachelor Party weekend in Vegas in honor of Kyle’s (John Favreau) upcoming nuptials.  Everything that can go wrong does in spectacularly violent and bloody fashion.  Rather than call the cops like normal people this group of psychopathic white males decides to chop up and bury two bodies (very pointedly an Asian Sex Worker and a Black Security Guard).

Back home Boyd (Christian Slater) tries to keep Adam (Daniel Stern), Mike (Jeremy Piven), and Charles (Leland Orser) in line as they all slowly but surely lose their minds to the guilt of having killed not one but two people.  As Boyd thrives in this sick alpha-male wet dream of his own creation everyone including Kyle’s no-nonsense bride-to-be (a perfect Cameron Diaz) begins to make their own very bad decisions.

For a certain type of person, this is an outright comedy.  This reviewer happens to be one of those people.  Berg who wrote the script said that this was based on a semi-true story (minus the Sex Worker and Security Guard deaths) and it wreaks of reality.  The film is pointedly critiquing the male ego and toxic masculinity (even if it wasn’t a phrase at the time) and taking down the “brothers in arms” camaraderie that comes with rich affluent suburban folk.  Berg’s film is disgusted with these characters and cares little of the plight their in.

Though this film may hate the characters and their actions, each of the actors is phenomenally cast and their performances are some of their career-best work.  Daniel Stern is the standout as the put upon “innocent” that guilt grabs by the throat at first.  Stern never truly got great dramatic roles though his comedic ones were imbued with such inner drama that whenever he did show up even in the wackiest of comedies it was always special.  Here he’s as heartbreaking as he is hilarious.  Not to be outdone, Christian Slater as Boyd is a meal and a half of a performance.  Slater is freed in a way he hadn’t before as the Self-Help, Self-entitled, Self-Made, Self-Asshole who finds his calling in the truly violent and grotesque.

Piven, Favreau, Orser bring their specific set of manic energy to the piece.  It’s actually Jeanne Tripplehorn (also in a recent Shout Select release Sliding Doors) and Cameron Diaz that both come to play in the way that Stern and Slater do.  Tripplehorn particularly is amazing as the “cut-the-shit” Mother and Wife to Stern’s character.  Her fight with Slater is both brutal and hilarious with her having one of the best moments in the film (you’ll know it when you see it).  Diaz has always specialized in brittle but hard women but here there is something different, a sense of egomaniacal lunacy that is as funny as it is tragic.

By the very bleak ending, one will know a little something about themselves and how they feel about suburbia.  Or not at all.  The best part of Very Bad Things is its take-it-or-leave-it tone.  One that Berg would never again attain.

A solid, decent transfer that looks to be a bit older than one would wish.  The grain structure is nice but a newer 2K or 4K remaster would have helped this one a great deal.

The new Audio Commentary with critics Whitney Seilob and William Bibbiani is a truly vital piece of this film’s puzzle.  For anyone that outright rejected this film may want to listen to this commentary track.  Seilob and Bibbiani do a fantastic job of not only critiquing the film but truly gets into the subtext, context, and super text of the film.  No stone is left unturned in their hands and done so with the wit that you’ve come to expect from the hosts of the Critically Acclaimed Podcast.

A Real Harvey Wallbanger Is an all-new 17-minute interview with actor Jeremy Piven. Beginning with Piven discussing just how pitch-black comedy. Tidbits include that his role was originally cast with Adam Sandler who dropped out at the last minute, how it is to work with Peter Berg who he feels is an actor’s director, calling him a “wild authentic beast” and a “gonzo director”, how Berg wrote the script from a supposed “real life bachelor party”. It’s a great very sedate (Piven is known for that manic energy) and articulate intelligent interview.

The Man Behind the Mask is an all-new 21-minute interview with the hilarious (the opening but is pure Stern). You gotta love that they’re filming in a corner of Stern’s house with a whole lot of GREAT Blu-rays. Beginning with a holy shit gag he does on the cast and crew during the burial scene. Stern admits to absolutely loving how dark the script and adoring Peter Berg’s talent and direction. It’s a joy hearing Stern speaking about the production, how it was to work for Berg, the work he did as Adam, and much more.

Rounding out the special features are the Theatrical Trailer and a Still Gallery. The 75-second trailer wildly misses the mark tonally on what you’ll be getting with this film, a fascinating document to behold. The still gallery cannot be navigated through but can be paused or run automatically. The Still gallery amounts to approximately 60 production stills, EPK images, and Lobby Cards.

Shout Select has done right by Very Bad Things.  It’s given it the right kind of thoughtful and considered extras to guide an audience through what could be a tough watch.  HIGHEST POSSIBLE RECOMMENDATIONS!!!