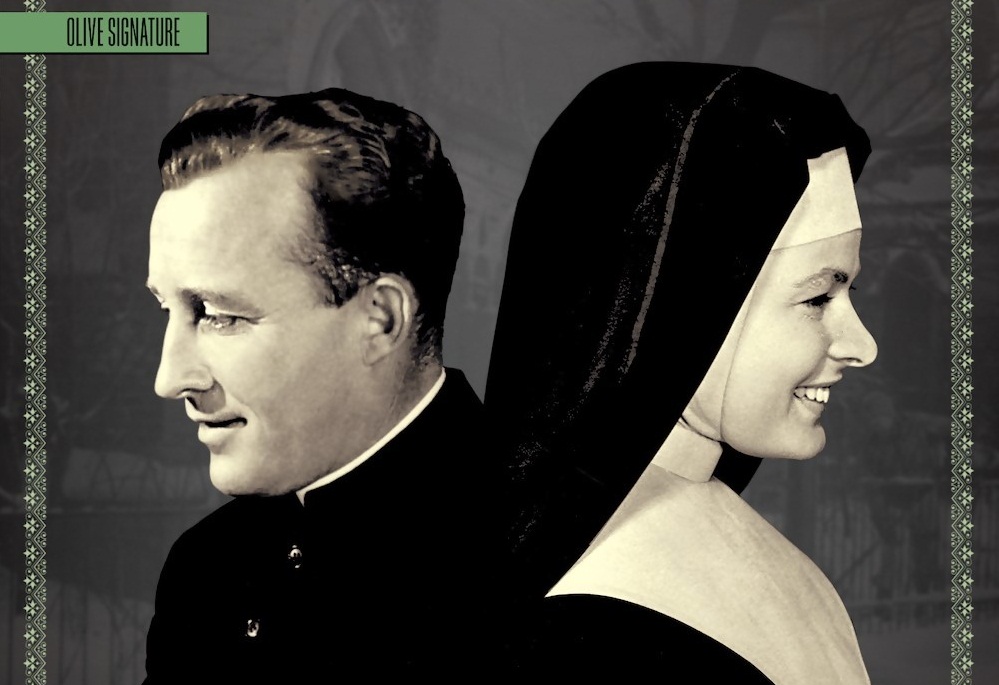 Olive Films brings the Leo McCarey’s The Bells of St. Mary’s to Blu-Ray with a beautiful transfer and great extras.

Warmth and humanity are the order of the day in Leo McCarey’s tale of a Priest and a Nun attempting to save a School and the harden Businessman who’s in their way.  Bing Crosby and Ingrid Bergman give us some of the best chaste chemistry this side of Jane Austin.

Father O’Malley (Bing Crosby) comes to St. Mary’s to help determine if the church should revitalize the Church’s in destress school.  In his way and trying to make her point is strong-willed Sister Benedict (Ingrid Bergman).  Their witty banter disguised as arguing about “the good of the school” is almost stopped dead in its track with the arrival of Horace P. Bogardus (Henry Travers). Bogardus wants nothing more than to turn the School (and Church) into a parking lot.  Can O’Malley and Benedict stand together long enough to foil Bogardus’s nefarious parking lot plans???

The Bells of St. Mary’s is head to toe an amazingly beautiful production.  It’s the type of handsomely mounted film that many would consider a “Prestige Picture” of the era.  At the center is Director McCarey with the lightest of touches allowing for a film that never feels heavy-handed or preachy.  In fact, like all of McCarey’s films carries a message but never delivered in the manner in which one feels manipulated.

Both Crosby and Bergman are a delight here as the Priest and Nun that ultimately see their goals are similar though their means are different.  Crosby having won an Oscar for the same role in Going My Way, the sequel has Crosby being the co-lead sharing equal time with Bergman.  The actors make a great pair that begins the film bickering rivals that soon transition to allies.  One would think that the performances would not work one way or the other.  This is not the case with both actors shining wither its bickering or working together.

The film ultimately earns its feel-good status and after watching no one will wonder why this became the most popular film of 1945 and was nominated for a boatload of Oscars.  Actually, it was Eight Nominations to be precise including Best Picture.  The Bells of St. Mary’s is a crowd-pleaser worth a shot.

Olive Films has gotten a new master from a 4K restoration that looks positively luminous.  One of the biggest treats for this reviewer is whenever studios decide to give a Black & White release a new “coat of paint” so to speak with a restoration.  Here is no different.  Having sampled the previous versions available on home video this is no contest.  Olive’s Transfer makes this a night and day difference.  The film is rendered with grain structure intact and a beautiful patina of grain that only further creates an almost perfect film-like presentation.

The new audio commentary by Gary Giddins, Bing Crosby biographer is informative on not only Crosby’s performance in this film but Giddins definitely deep dives into Crosby’s life, and his filmography leading up to this choice and discussion about the previous film.

There are two 60-minute radio adaptations of the film presented here.  Both starring Bing Crosby and Ingrid Bergman, one from 1946 and the other from 1947, and also include Crosby singing two songs from the film.  The biggest difference between the two radio plays, other than the slightly different performances is the narrators.

Before Sequel-itis is an all-new 8-minute interview with Emily Carman who discusses franchise and the making of The Bells of St. Mary’s which is itself a sequel, to the successful Academy Award-winning film Going My Way.

Human Nature is an all-new 22-minute interview with Steve Massa as he discusses the life and filmography of Leo McCarey the primary focus being The Bells of St. Mary’s.

Faith and Film is an all-new 18-minute Sr. Rose Pacatte discusses her first viewing of The Bells of St. Mary’s its impact on her and the film’s larger themes and its impact culturally at the time.

The Bells of St. Mary’s is the real deal.  Highest Possible Recommendations.

Olive Films Blu-Ray edition of The Bells of St. Mary’s is out now