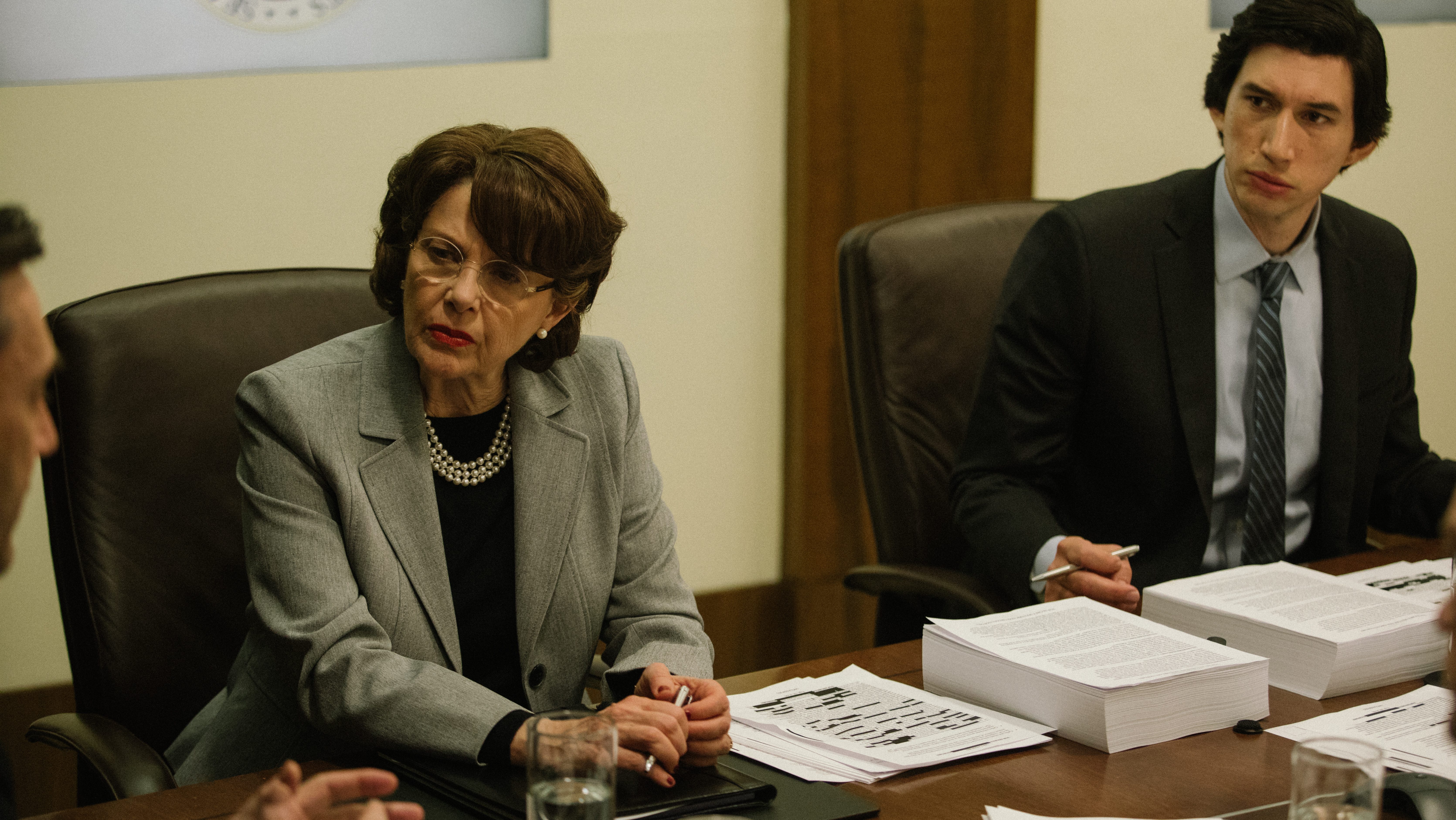 Anchored by Adam Driver in a quietly powerful performance, Scott Z. Burn’s directorial debut The Report is the kind of Political Thriller that is as engrossing as it is vital and rarely seen anymore.

Fresh out of University, Dan Jones (Driver) only wants to serve his country in a meaningful way.  Post-9/11 Jones changes his focus to Counter Terrorism.  His work brings him to the attention of Senator Diane Feinstein (Annette Bening).  Feinstein tasks him to create a report on the CIA’s torturing of Prisoners for Information during the post-9/11 War on Terror.  Jones with a small group of researchers begins the process of figuring out the how’s, why’s, who’s, and where’s of the origins of the CIA’s EIT (E.hanced I.nterogation T.echiques).  Jones begins as Kafka-ian downward spiral into the most harrowing acts of violence by the agency.  As Jones 7,000-page report comes into focus forces around Jones begin tighten their grip trying to bury the report.  It is only with the help of a precious few, and the tenacity of Jones is what keeps his explosive findings from being buried in bureaucracy.

Burns’ film is the kind of focused and clear-eyed journalistic political endeavor that used to be a mainstay of 1970’s cinema.  Directors like Pakula, Lumet, Penn used to thrive in creating docudramas or narrative works of fiction that shed a light on issues of the time.  Burns has updated that sort of filmmaking for our anxiety driven times. A world where bureaucratic agencies are the things of nightmares, acting on their own accord with minimal if any sort of oversight, not killing you but discrediting you, finding ways to bilk an already unstable public and government.

The Report sees the fear and anxiety of a post-9/11 US with the sort of clarity that we haven’t been able to see. One where mistakes, human error, and the guilt associated with those fallibilities created a reactionary Clandestine Agency attempting to right a mistake with the kind of violence and sociopathic techniques that feel straight out of a paranoid thriller.  Burns’ film ensures that we understand this happened, this is not fictional, no one was there to stop it, objections were made but against the wall of bureaucracy and fear of Terrorism.  The way the film lays these moments out with the sort of detached clarity makes it all the more frightening.

In the center of this maelstrom is Adam Driver’s Daniel Jones.  Jones is smart, quiet, determined, with the sort of righteousness that is earned over the course of the film.  Driver’s performance never feels perfunctory or some sort of totem for political activism.  Rather Driver makes Jones someone who believes in the process of government.  Even in the darkest of hours Jones believes that good will triumph over evil.  Lines like “if the report doesn’t come out, then I haven’t done my job” in Driver’s hands are the kind of magic that James Stewart used to conjure, powerful without the least bit of sentimentalism.

In what feels like a reflexive casting Annette Bening as Diane Feinstein is just as good as Driver as Jones and serves as both the perfect volleying partner and contrast to Driver.  Bening’s performance is not one of mimicry but one that feels alive and lived in.  Many actors find a niche or gimmick portraying a still-living Public Figure.  Bening does the opposite, giving us not the fire-and-brimstone of Senator Feinstein we have seen on CNN.  Bening always perfectly pitched as Feinstein.  Severing as both boss and mentor to Jones, Bening manages to sidestep all the clichés inherent within that trope.  Her Feinstein is one that is considered, fallible, measured, honest, and most of all angered by the injustices being revealed.

The rest of the cast is uniformly excellent with Linda Powell, Jon Hamm, Ted Levine, Michael C. Hall, Tim Blake Nelson, and Cory Stoll all doing superb supporting work.  Maura Tierney, T. Ryder Smith, and Douglas Hodge are standouts of the supporting cast.   Their trifecta of bureaucratic evil in the film is one of the more angering and scary aspects of the story.  Their work together, as the architects of EIT and its deployment, is frightening in a way that feels real and authentic to the way something like “water boarding” becomes a tool.

It is too early to tell where The Report will fall in the spectrum of great Political Thrillers but make no mistake this one is one of the best that the genre has to offer.  Equal parts thrilling, angering, intelligent, and best of all told with a distance and clarity that never blames only shows.  The Report is vital docudrama filmmaking at its best.  Run don’t walk to see this one.