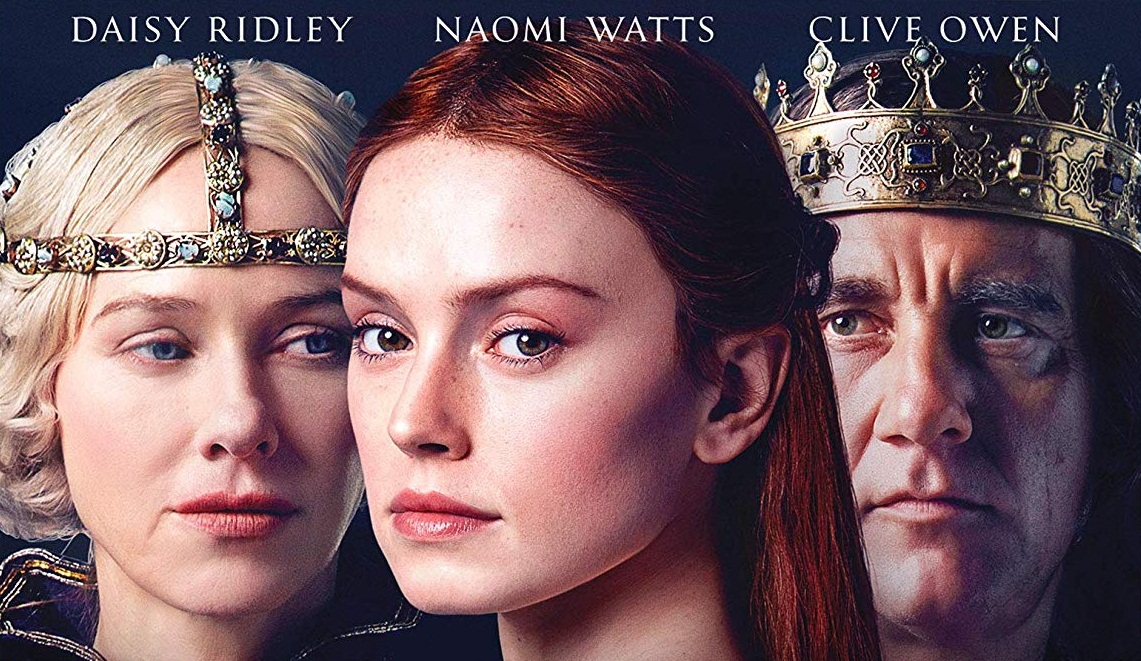 Ophelia takes Shakespeare’s most famous play and changes the Point of View.

Shakespeare was never kind to women.  One of his more maligned characters was Ophelia from Hamlet.  Used and abused by everyone, but her brother, she was the true tragic character of the play.  Director-writer Claire McCarthy has used the character and transformed her from one of tragedy to one of resilience and courage.

From a young age, Gertrude (Naomi Watts) takes a liking to Ophelia (Daisy Ridley) and turning her from a motherless child into a lady in waiting. One of her most trusted ladies, Ophelia rejects the boyish Hamlet’s (George McKay) affection. She is shocked to learn of an affair between the Gertrude and the King’s brother Claudius (Clive Owen). Guilt from being complicit in the death of the King at the hands of Gertrude and Claudius leads her to Hamlet.  Ophelia finds herself in deeper and deeper troubles as she falls in love with the troubled Dane, an impending war, and everything else that plays out in the Bard’s play. Oh, yeah and the whole reconciliation of our main hero’s death.

One of the biggest references for McCarthy has to be Wicked.  Much like the popular novel and musical Ophelia reimagines its main character in a much more sympathetic light.  In fact, McCarthy as writer and director ensures that every questionable scene is counter with a different point of view and light that pushes against the Bard’s most problematic characterization.  The way she portrays even the biggest moments for the character is done with wit and understanding.

If Ophelia is an indication of the work that audience is in store for by Daisy Ridley, one can only imagine the laurels and awards that will be awarded to the young actor.  Ridley is magnetic as Ophelia.  Both demure and strong without seeming too modern.  The actor’s work is in direct opposition to her work in both Star Wars films. This is a truly realized character not just some sort of variation on her Rey character from The Force Awakens.  Ophelia in her hands is a woman sure of herself but unsure of the world and those around here. Thankfully, they never do anything as crass as try to have her fight or do anything that would be out of line with what the Bard wrote.

The rest of the cast is in support of Ridley.  Watts playing duel roles here is particularly strong as Gertrude has always been played asexual, though here we do see the motivations and machinations that led to her betrayal of the kingdom and her King.  The biggest surprise is like Ophelia she is never blamed or is her outright antagonist.

Ophelia is worth seeking out.  It’s turning upside down of Shakespeare’s play gives it a new vitality not present in the male-centric versions of the play.  Claire McCarthy has built on the promise of Little Hands lets home it doesn’t take another 8-year for her to make another.

Ophelia’s transfer is solid.  The digital photography is perfectly rendered.

Cast & Crew interviews are 30-minutes of EPK style questions to director Claire McCarthy, Producer Daniel Bokker, production designer David Warren, actor Clive Owen (Claudius), actor Devon Terrell (Horatio) actor George McKay (Hamlet), Tom Felton (Laertes). Each runs about 5 to 7 minutes long. Each discusses their role in the film, in the case of the actors. Each discusses how the approached the work and the script in the case of both the cast and crew. Everyone does compliments, Claire McCarthy. In place of a making-of or commentary this is a great informational set of interviews.

The deleted scenes run about 7-minutes long and appear to be outputted from an Avid edit. You can skip chapters but not play them individually. Much of the scenes are extensions of existing scenes. They add some character moments but nothing from the film as a whole. Though much of it like the Queen and the Ladies in Waiting give context to a rivalry or the moments between Ophelia and Hamlet give more weight to their relationship.

Rounding out the special features is the official trailer for the film.

Ophelia is an undiscovered surprise waiting for a willing audience.  Recommended!!!

Shout Factory’s Blu-Ray for Ophelia is out November 5th