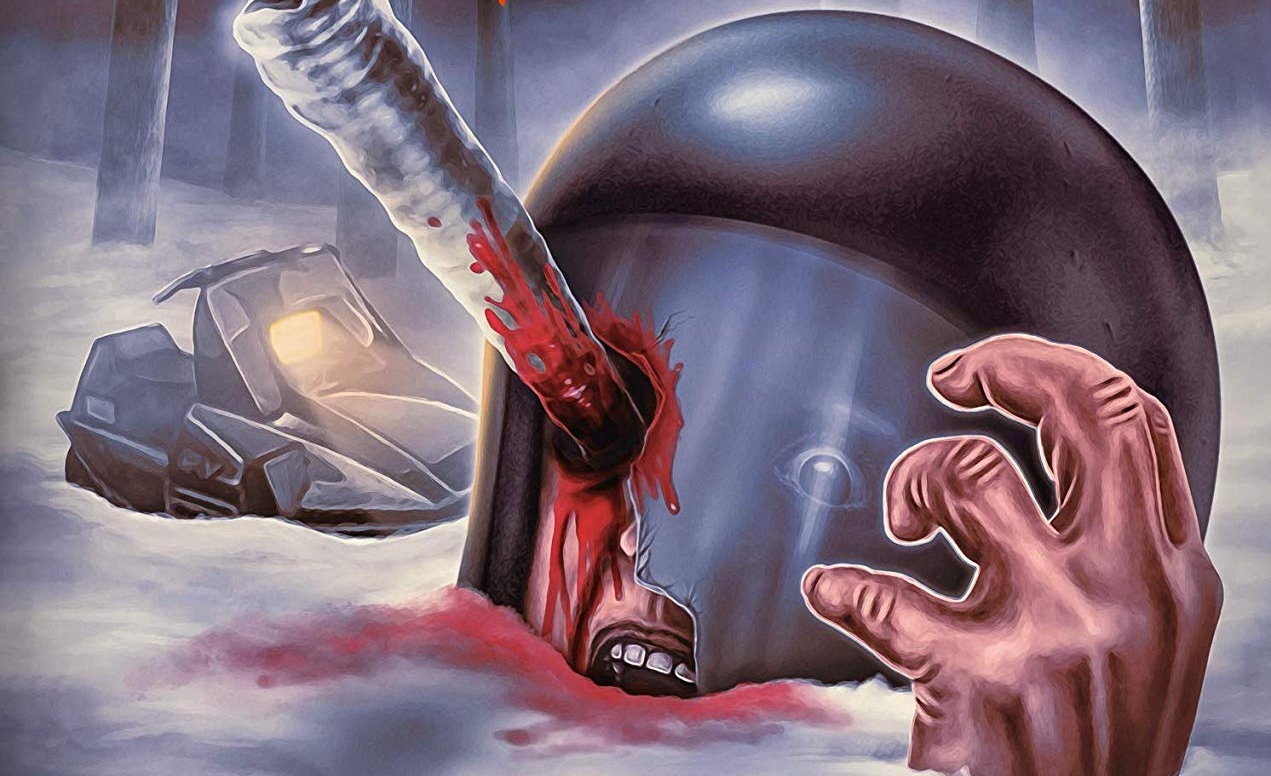 It was a promising set up; Evil Dead meets Hotdog: The Movie. Everything went wrong from there in The Chill Factor. Arrow Video has supplied a great host of features and transfer.

You could have been amazing.  You had everything one would want from an early 90s horror film; sex, snowmobiles, possessions, demons, hell even a damn log cabin but… you’re anything but amazing.  What we wanted was Evil Dead meets Better off Dead or Hotdog: The Movie and… you’re just not.

Now, I have to explain to them why you’re not as awesome-o as those other films I mentioned above.

P.S. here’s the rest of the review;

A group of friends head off for a weekend of extreme sports fun (see The Hills Have Eyes 2 for similar plot) head to the mountains. What they get is a weekend of terror, possession and demon set (yes, its that kind of horror movie). Will anyone survive? Well, at least one person does as they’re narrating this whole fucking thing. Though the one that does gives us a tone of some Summer Romance in the early part of their life reflecting, which is completely bonkers but not in the great-awesome-so-bad-its-good.  This is so-bad-its-bad-and-boring-to-top-it-off.

This is the kind of horror that showed up on Cinemax past 12:00 am.  Let us be clear.  This is not that on-the-cusp of being X-Rated-sleazy-horror-sex-filled-Full-Moon-Production that starred Eric Roberts and Kari Wuhrer kind of film that you think it may be.  The Chill Factor is the ultimate sin; no commitment to either the gore or sex set pieces. It balances itself in limbo-land of not having much of either and leaving everyone unsatisfied. The Chill Factor wants its cake and to eat it too, u n fortunately, it is plan doesn’t work and we are left with neither.

That said there are some truly awful so-bad- its-bad lines of dialogs and awkward character development to make the MST3K-set super delighted to ironically watch this. For those looking for something substantive and sincere should look elsewhere.

The brand new 2K restoration from original film elements looks beautiful.  Though the film was shot on a tight minuscule budget the film is slickly shot.  The best work being the Snowmobile set pieces.  The transfer shines with what’s a surprisingly sharp image.  Those familiar with 80s Cinemax softcore will be well aware of how the film looks with a mixture of soft lighting and gels interiors and stark no-filtered exteriors.  How Arrow managed to make it all look consistent and best of all pretty is beyond this review though they should be commended.  An excellent transfer for a not-so-excellent movie.

Original Workprint is an 83-minute long alternate version of the film. This workprint is sourced from a VHS copy. The  is not good and the score and the narration is missing, and only production sound is in of Sound FX. This is a slightly different film with some of the gore and sex scenes being played out a bit more. The rough shot nature of this version actually enhances the film. As does the lack of the score (which feels highly inappropriate in the release version). This version does make it abundantly clear that the voiceover was needed.

Fire and Ice is an interview with Stunt Coordinator Gary Paul. The 11-minute interview has Paul discussing how he got involved (by way of Fangoria who had gotten in business with the Director-Producer Christopher Webster). The stunt coordinator primarily discusses the setup of the stunts and the chase at the end.

Portrait of a Makeup Artist is an interview with Special FX artist Jeffery Lyle Segal. The 15-minute interview with the Makeup FX artist begins with discussing how he worked with Stuart Gordon then moved onto Henry Portrait of a Serial Killer (getting Rooker the gig). The discussion is primarily about Henry which is fantastic. It’s a great interview for those side tangents. He does speak about The Chill Factor and getting involved, beginning with Trapped Alive. There’s some great footage from all the films he discusses.

Ouija and Chill is an interview with Carlson with writer Hadley. These two men show up on the commentary. The 26-minute interview does have a little bit of overlap with the commentary. The interview begins with both admitting they were both from Wisconsin. They then deep dive into the various work he had done (including the Arrow release Trapped Alive). The discussion gets very interesting as Hadley prompts Carlson to discuss the difference between big-budget and lower-budgeted features, and also promoting TJ discuss the various gags and set pieces. It’s an all-around great interview that results in some good “nuts and bolts” filmmaking anecdotes. Bonus points to Carlson STILL having the Laserdisc of The Chill Factor aka Demon Possessed. Extra bonus points for the cheeky mid-section Ouija board gag.

Rounding out the Special Features is a Photo Gallery and the Original Home video Trailer. The photo gallery consists of about 43-stills that range from behind-the-scenes photos, and production stills. Unfortunately, one cannot navigate the photos or pause them with your remote. The best feature on the disc is, in fact, the Home Video Trailer that runs 2-minutes and is listed under its original titles Demonic Possession. This trailer is taken straight from the Video release so the quality is as such. The trailer is better than the feature for sure.

The Chill Factor the film is saved by Arrow Video’s special features and splendid new transfer.