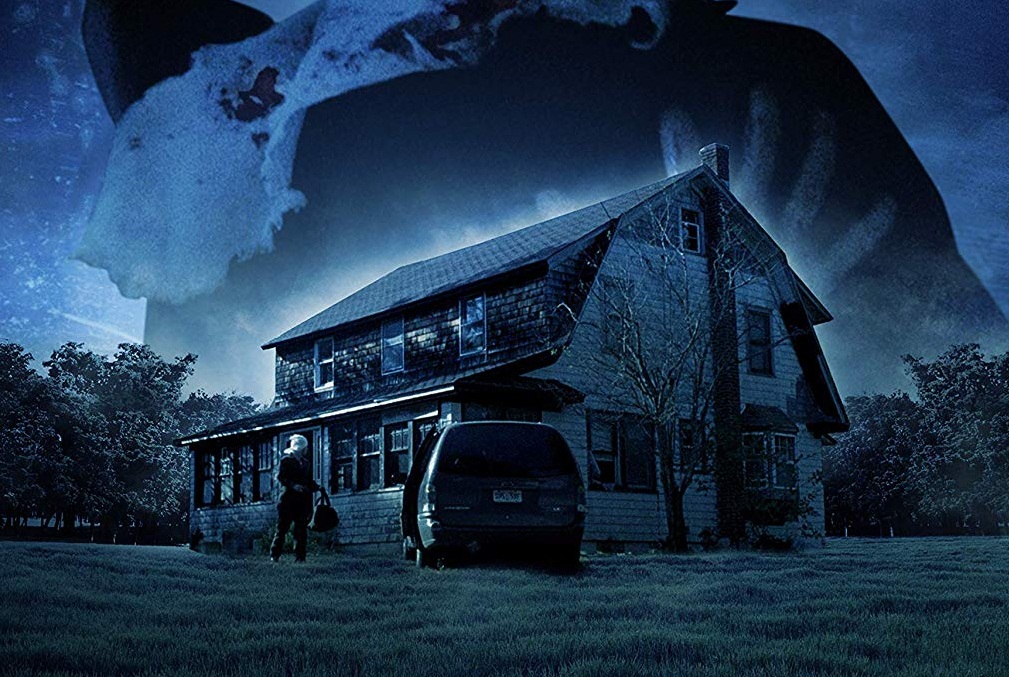 Producer-Writer-Director Stevan Mena announces himself to the Indie Horror world with his debut feature.  Malevolence is not your average low-budget horror film.  By creating a clever mash-up Mena is able to do the one thing Horror Directors crave most; put the audience off balance.

A Kidnaping. A bank robbery. Two crimes. Separated by over a decade. These unrelated crimes intersect with dire consequences for everyone involved including the criminals themselves. What begins as an ordinary day for victim and criminal alike will end where no one is expecting.

The beauty of Mena’s film is knowing little to nothing about the various plot mechanics at play going in.  That ignorance plays to the audience’s benefit. Even the comparison of say two films would ruin the sadistic fun in store for horror fans. What the film lacks in polish it more than makes up for in ingenuity. The film by design is self-contained and written to maximum its micro-budget but never feels like it’s compromised its story because of said budget.

Malevolence is a horror fan’s dream; an undiscovered gem waiting your eyes. Many horror vets will have seen and adored this entry.  It is after all the first in a trilogy of horror films. Those that are not familiar will be quickly converted to fan as the closing credits roll.

Mena’s Company has provided a beautiful transfer from the original 35mm elements.  The results are stunning in the way that film (not digital) looks in Hi-Def.  There’s an ample amount of grain kept for the transfer which is perfect as the film has a consistently grim tone that keeps in line with the visual look.  The transfer is a word is great.

Commentary is an interesting affair with Mena and Brandon Johnson discussing the film. A great combination of “nuts and bolts” production anecdotes and discussion of development.  Anyone getting into, or thinking of getting into Indie filmmaking must listen to this track.  Mena and Johnson both discuss in pretty great detail the trials of making an indie film and why it can take, in the case of this film, years to complete. Definitely, worth a listen.

Back to the Slaughterhouse is a 31-minute behind the scenes making of featurette. Mena and company discusses the origins and making of the film. A compliment to the commentary. A lot of the stories told are not repeated. Lots of behind-the-scenes photos, b-roll and interview footage are included. A surprisingly in-depth making-of for a film that was as low budget as it was.

The Dark Side of Horror is a 12-minute interview with actress Samantha Dark who plays Samantha. Beginning with her love of classic horror and film, and her beginnings as a actress. The UK born actress discusses her experience with the production and also what Mena had really discussed the inspiration for the original film.

Leatherface Speaks is a 5-minute discussion with the original TCM baddie Gunnar Hansen and Mena. One can tell that Hansen has true affection for the film and Mena’s work. It’s a great bit to see the horror icon just talking hardcore film geekiness.

Fundraiser Trailer is a 1.5 minute trailer the production (aka Mena) used to sell potential investors. No different than an Kickstarter just done waaaay before Kickstarter was a thing. The trailer appears to be mastered off an AVID export or VHS. Which is fun in itself as it adds a visual aesthetic probably not really thought of.

The Deleted Scenes section is about 10-minutes long and amount to about approximately 9 lifts. Some of the deleted footage includes an entire section of film during the field burial. The other is an entire Roadblock scene. There’s odds and ends from the final moments of the film.

The photo gallery is a collection of behind-the-scenes photos set to the films score that runs automatically. There isn’t navigation as the way it’s presented is more like a photo/video collage.

Rehearsal footage is 1.5-minutes of a single scene played out. Shot on video.

Rounding out the special features are the Trailer and TV Spots. There are 1 60-second spot, 1 30-second spot, a local TV News Report on the filming of the production, and 3 radio spots.

Malevolence is out now on Blu-Ray