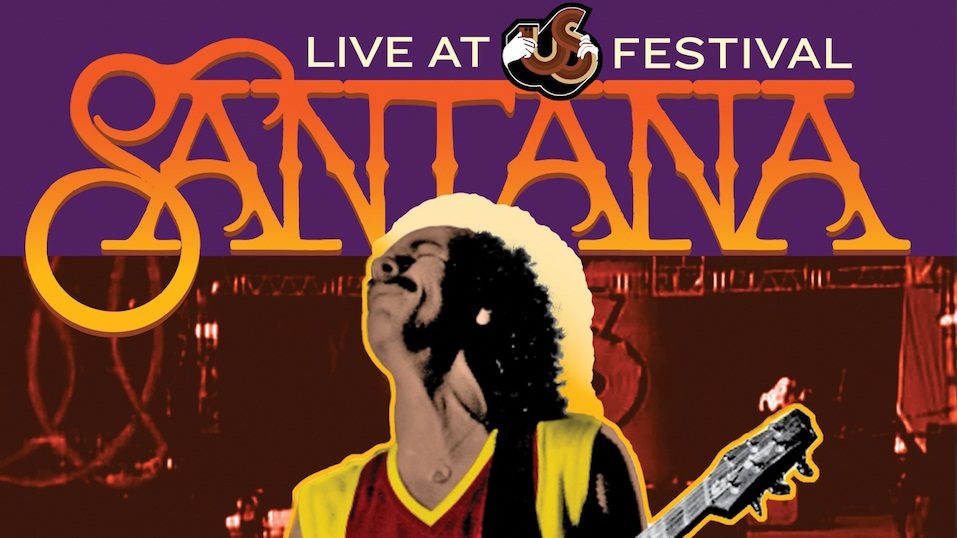 Shout Factory has released Santana: Live at US Festival which is a hybrid concert/interview that allows the Musician to comment on the set and look back but also fully immerse oneself into what matters most; the music.

A strange hybrid mix of Festival Footage and Present Day Interviews with Carlos Santana make up this interesting concert film hybrid Santana: Live at US Festival.

Many a concert film is content with just allowing the concert play out without context, rhyme or reason as to why the setlist played as it did, or the reasoning the concert came together in the first place.  This is fair and acceptable as to not throw off the balance of the concert and music itself.  One does not want a Nine Inch Nails or a Beyoncé interrupted mid-stream as those specific artists have created an entire milieu and experience that is better seen than commented on.  That being said, Santana: Live at US Festival makes a case that in some instances this is the best possible format.

As Carlos Santana as our guide, the Legendary Guitarist, takes us through the entire set that Santana (the group) played at the US Festival.  He gives us context as to how they came to be on the show, how and why certain people showed up as guests and the fundamentals of his theories on Music and playing Guitar.  For anyone that loves Santana, this is a gold mine.  Those that are only passing fans will find some of the interview segments tedious.

The concert footage itself is solid.  Seeing Santana (both the band and the guitarist) at the height of their powers at the beginning of the 1980s is a treat.  Part Rock, Part Jazz, and all infused with a Latin and Worldbeat that feels as much Dance Music as anything Rock can be.  The camera is constantly roving through the musicians finding interesting moments be it Santana flying on a solo, or Lead Singer Alex Ligertwood belting out Black Magic Woman.

More bands really should consider this format, especially for their appearances at festivals as it definitely does give more and pads out the time for what could possibly be half set.  Santana: Live at US Festival makes for an interesting watch albeit one that will probably only interest fans.

The original Festival was shot on Video in 1982.  I mention the year for context.  The footage is about as good as Live AID footage you’ve seen from a few years later.  That is to say, Video is not great.  That being said, the film’s producers have done everything to clean up the footage.  The results are solid.  Part of the issue is that the Interview footage is from 2018 and they have used what appears to be 4K Cameras.  This can be jarring as this footage is beautifully rendered and perfect as one would expect.  Shout has done a marvelous job with the transfer but those expecting 35mm footage ala Woodstock will be sadly disappointed.

With any Musical Entry to Blu-Ray the most important item is and always will be; The Sound.  Shout Factory has done a marvelous job of mastering the sound for the full Home Theater Experience. The audio has been cleaned up and given a 5.1 remaster.  The remaster is full and robust with a nice open sound field.  The sound field is closer than I had expected.  There is little if any distortion when playing at higher levels.  The sub/low-end is solid but those expecting the low-end from more modern concern discs (NIN discs come to mind) should temper expectations.  All in all a great sound mix that Santana Fans will enjoy.

Each of the four clips included only run approximately 90-seconds.  The clips can be found within the documentary and appear to be designed to promote rather than an extra feature (as all this information is within the Documentary itself).

Also included but not listed as a special feature is a TRACKLIST menu that allows you to jump right to a specific song.

This is a Fan-Only Recommendation.  Santana: Live at US Festival won’t make any converts to the Band and Guitarist rock stylings, but for its intended audience this one is worth the price of admission.

Shout Factory’s Blu-Ray of Santana: Live at US Festival is out September 6th