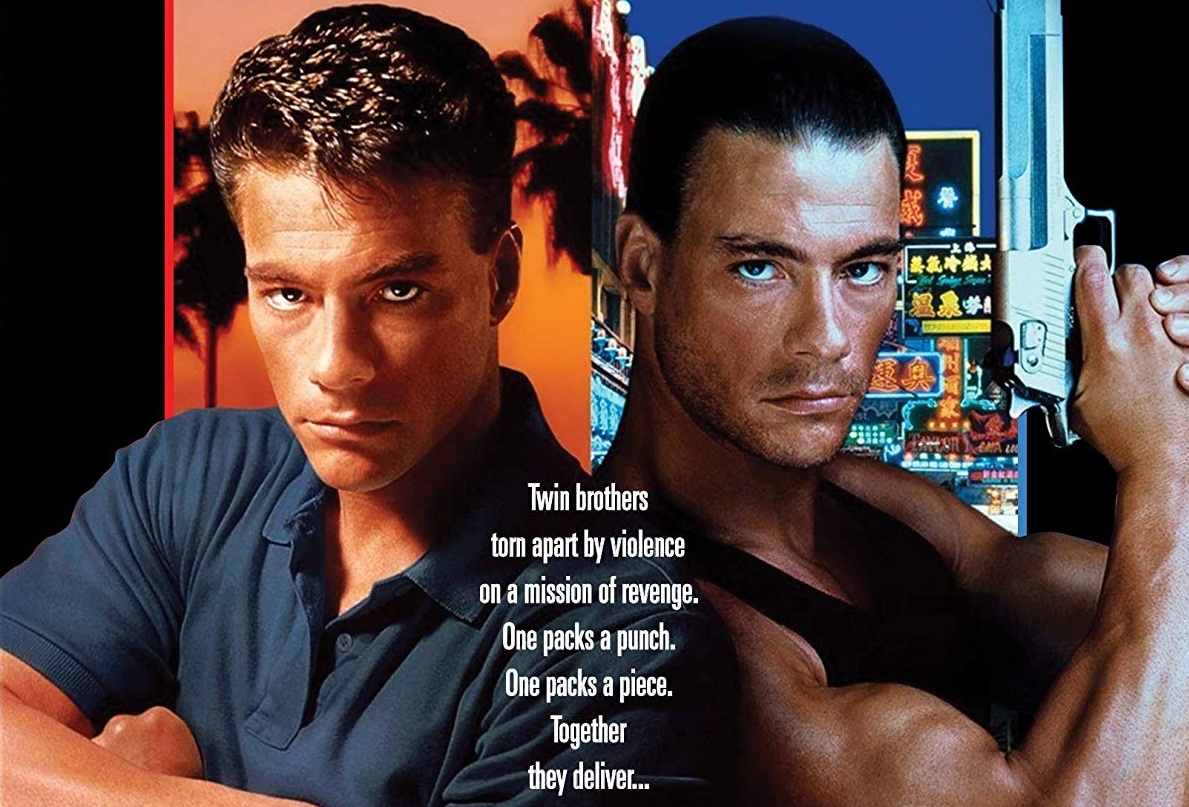 For a large portion of Action Junkies, the ’80s and ’90s stand as the pinnacle of action cinema.  Names like Schwarzenegger, Stallone, Chan, Willis, Seagal, Snipes, Yeoh, and who could forget Jean Claude Van Damme.  Movies like Raw Deal, Police Story, Cobra, Die Hard, Above the Law, Passenger 57, Super Cop, and the film of this review Double Impact.  JCVD may have been the (Box Office) lesser of the Action Stars of the era but that by no means does that impede on quality.  Well, it does, in fact, impede on quality but not in the case of Double Impact.  In fact, this is a case of double the Van Damme is actually something that works in favor of the film rather than against.

Twin brothers Chad and Alex (Van Damme) are separated at birth. One ends up in LA.  The other an orphan on the streets of Hong Kong. Now brought together by “Uncle” Frank (Geoffrey Lewis) they must avenge their Parent’s murder at the hands of Gangsters and Industrialists cashing in on Hong Kong’s construction boom of the 1990s.  Chad and Alex must first resolve their differences before they’re able to ascend to the corporate industry that is rightfully theirs.

Co-Writer/Director Sheldon Lettich has adroitly adapted Double Impact from The Corsican Brothers (yes, the Alexander Dumas novella for those Classic Literature Heads out there). Though comparisons will do no good as they’ve just taken the basic plot, minus the whole “the other brother can feel what’s happening to other”, the rest has been JCVD-ized for this action thriller.  Much of what’s been replaced feels like HK-Flavored Heroic Bloodshed troupes with much of the film’s drama centering around corruption, honor amongst thieves and families.

Even the action plays out like John Woo’s balletic gunplay with slow-motion infused gun battles.  Though anyone expecting the God-level action setpieces adjust expectations accordingly as one will be sadly disappointed if they assume Double Impact can compare to The Killer or Hardboiled or even Face/Off.  The film is so in love with HK-Action Cinema they cast not only Bolo Yeung as one of the villains but the film does a deep dive and casts Woo-Regular and Police Captain extraordinaire Phillip Chan.

This isn’t classic literature or classic action.  What Double Impact is, is a helluva good time and a damn solid action film.  The phrase “double the pleasure” applies fully or as the trailer for the film advertised, “Double the Van Damage”. Double Impact signs, seals, and delivers on that promise.

The film is beautifully rendered on Blu-Ray.  The film’s contrast and sharpness are impressive. Though MVD has stated they are using older transfers for their discs, the transfer that MGM/Fox provided for Double Impact is a great solid more modern transfer possibly from earlier Blu-Ray era.  Fans will not be disappointed.

The Making of Double Impact: Part 1 & Part 2 is a 2-hour 2-part feature-length retrospective documentary featuring interviews with star and co-writer Jean-Claude Van Damme, director and co-writer Sheldon Lettich, producer Ashok Amritraj, co-star Cory Everson-Donia, co-star and fight coordinator Peter Malota and ”Chad” and ”Alex” photo doubles Jeff Rector & Jerry Rector.  Beginning with its origins of being a sly adaptation of The Corsican Brothers this making of literally leaves no stone unturned. The making-of gives a detailed account beginning with Golan & Globus (of Cannon Film fame) having a two-picture deal with JCVD and after a test screening of Bloodsport wanted nothing to do with the actor which lead to Moshe Diamant wanted to be in the JCVD business moving onto Sheldon Lettich coming on to help to script the film.  There is a wealth of knowledge and anecdotes from the production and even larger.  Some of the highlights are watching a Tia Carrere was almost cast (they include her audition tape), and how JCVD was almost cast in Oliver Stone’s Alexander.  To discuss more would ruin what’s a great making-of and one of the best special features of the year.

The 54-minutes of deleted and extended scenes is impressive, there are about 23 individual deleted or extended scenes. A lot of it is bits trimmed to secure an R-Rating from the MPAA. Some of it is character work.  But the good stuff is the extended fight sequences.  They include just about every fight that JCVD has including an extended version of most of the fights including Chad vs. Alex. It’s all fascinating to see what was exactly cut from the film. They have even included an alternate extended ending. The footage is all taken from an edit bay or VHS copy of the footage. It varies from Black and White to Color. One does wish they had the resources to do a restored unrated cut because Leitich does some great slow motion gun balletics ala John Woo.

Anatomy of a Scene – is an 8-minute breakdown of the mid-film chase scene. It’s a combination of B-Roll footage, The Scene itself, Photos are all used as a “master class” deep dive into the scene itself which is a mini-commentary.

Behind the Scenes, is an EPK 7-minute vintage featurette. Overheated voiceover only adds the entertainment value.

B-Roll Selections is 8-minutes of raw behind-the-scenes footage without any commentary or interviews interspersed. The primary focus is the HK Foot chase.

JCVD, Charles Layton and Moishe Diamant are all a part of the Cast and Crew Interview section which amounts to about 6-minutes of canned interview bits.

Film Clips is what it sounds like. 5-minutes of 90s broadcast quality clips from the film. Some fight scenes. Some small dialog moments.  Basically put together so Media could put together segments for the film on their broadcasts.

Rounding out the special features is a Trailer for Double Impact and other MVD Rewind films such as Double Dragon, Black Angel, Lionheart, and others.