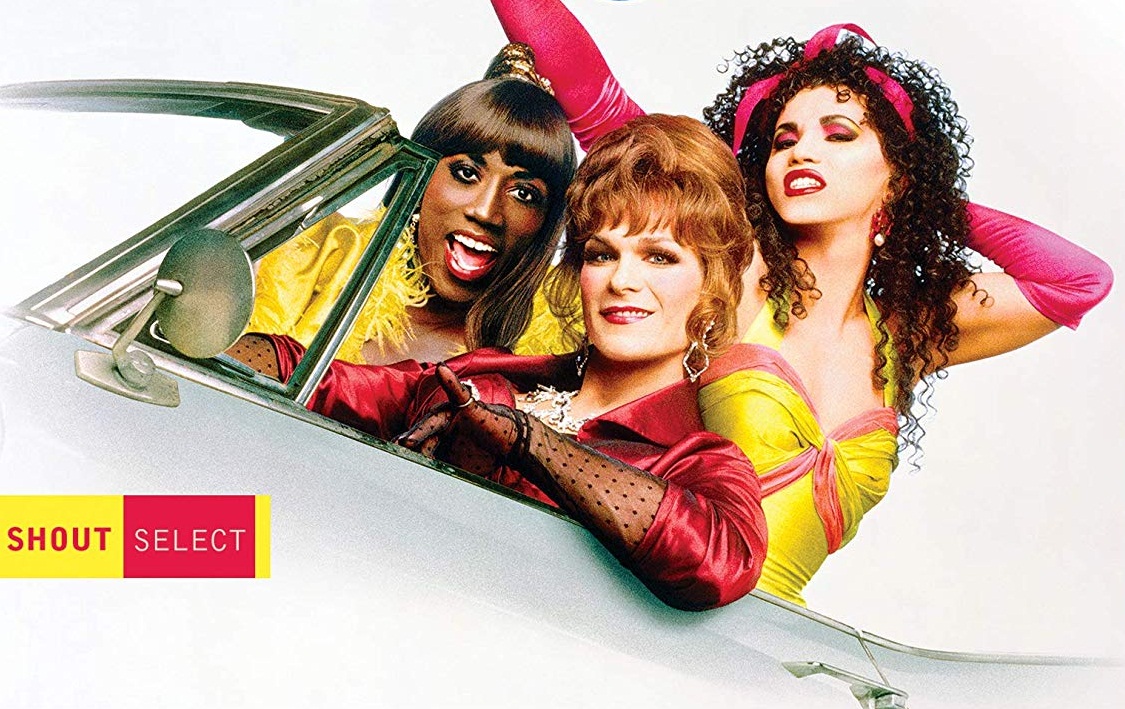 Adam finds Shout Factory’s Blu-Ray Edition of To Wong Foo, Thanks for Everything Julie Newmar as funny and fresh as the film was when released twenty-five years ago. Or in simply put; FABULOUS!

A huge title deserves huge personalities, laughs, and heart. The Amblin Produced To Wong Foo, Thanks for Everything Julie Newmar has all that and more. Thanks in large part to the trifecta of comedic ace performances by Patrick Swayze, Wesley Snipes, and John Leguizamo. To Wong Foo, Thanks for Everything Julie Newmar is the type of comedy we rarely get nowadays. One rather than being made for everyone is made for a singular group, and by default becomes universal. In 2019, I highly doubt a film about Drag Queens would be made by a major studio, and also be allowed to be this funny.

To Wong Foo, Thanks for Everything Julie Newmar is your basic road trip movie, instead of Hope & Crosby you get Vida (Swayze), Noxeema (Snipes), and Chi-Chi (Leguizamo) all Drag Queens in the various stages of their lives. Vida is coming to an age where she is going to need to settle down. Noxeema is in the prime of her life and career. Finally, Chi-Chi has just started her journey in finding herself. Vida and Noxi are long term friends who take Chi-Chi under their wings and with them from New York to the sunny land of Dream; Hollywood. What begins as a road trip quickly turns into an adventure with racist homophobic sheriffs (Chris Penn), a small town with a troubled population filled with the likes of Blythe Danner, Stockard Channing, Jason London and Others, and a broken car. Before one begins to think this gets super serious, it does not. Actually, that is To Wong Foo, Thanks for Everything Julie Newmar strength. It’s ability like Vida, Maxi and Chi-Chi to make everything lighter than air and of course fabulous.

Much of the delight of this film is how its trio of leads never blinks or makes their characters anything less than complex, funny, and heartfelt humans. The impulse, especially in the ‘90s, would have been to lean into the joke. Thankfully writer Douglas Beane and Director Beeban Kidron have no such intention. They allow the comedy come from the characters rather than forcing it. Through this it allows the characters to be human and have not just laughs but moments of true emotion and heart. When Vida and Chi-Chi have a blow up, it’s a true knock-down-drag-out fight that isn’t played for laughs. It’s that kind of considered writing that makes the film so special. Kidron’s direction is always sensitive but manages to be colorful and broad when the moment calls for it. It is Kidron’s unforced touch that makes all the difference, never playing for the joke or the emotional beat.

Swayze, Snipes, and Leguizamo all do special work here. They all uniquely make Vida, Noxeema, and Chi-Chi not only real humans and comedic forces to recon with. Those two counter-points are never easy to pull off one by themselves let alone together. Swayze is the heart of the picture playing for the most part the “straight person” (no pun intended) for the more flamboyant performances of Snipes and Leguizamo. It is still a marvel after more than a quarter century later that at the height of his career Wesley Snipes played the role of Noxeema. Furthermore, the actor played Noxeema with the precision and intelligence that no other actor could bring. There’s a confidence and strength that Snipes brings that internally plays through out that makes the performance shine even when Noxeema is in the background. The star and scene stealer supreme is Leguizamo’s Chi-Chi. Leguizamo is unleashed to do whatever his comedic heart desires as the young Fast Talking Woman. He makes Chi-Chi both an annoying teenager and a feisty angry woman lost trying to find her direction. Together they work as a comedic three-headed-hydra that gets maximum laughter and heart from an audience not from jokes at their expense but because of the situations they find themselves in.

To Wong Foo, Thanks for Everything Julie Newmar is hands down as great a comedy produced in the ‘90s. The points that make it so special are beyond the laughs and the humanity that the film treats all its characters with. Rarely have we gotten a drama, let alone comedies that feel as positive and joyous as this one about the LBGTQ community produced in the last twenty five years. Even rarer still a LBGTQ film that was produced by a Major Studio and Producer (Steven Spielberg)… To Wong Foo, Thanks for Everything Julie Newmar goes beyond what many would say is its audience and finds commonality for everyone.  Therein lays its power and its ability to age as gracefully as it has.

The folks at Shout Factory and Universal have treated the film correctly giving it the bright poppy transfer it deserves.  The transfer accurately represents the greens of the Midwest along with the colorful outfits everyone seems to wear throughout the film.  The grain structure is perfect giving the transfer a more filmic look.

Easy Rider in Dresses: The Making of To Wong Foo – is a 52-minute featurette with Screenwriter Douglas Carter Bean, Director Beeban Kidron, and Star John Leguizamo along with some great B-Roll video footage. Starting with Bean creating the spec script to the development to casting and finally production this making of is a comprehensive look back at this unique and hilarious film. Interesting tidbits includes Wesley Snipes wanted to be in the film and actively pursued the role, a fight that broke out between Swayze and Leguizamo, how Robin Williams got involved and how he took two days from one day, the time spent on makeup and costume, and how Steven Spielberg helped the production in unexpected ways.

Deleted scenes amount to 15-minutes and 11 scenes. Though highly entertaining, but rightfully cut from the film. Though the first scene does describe how they get the picture that creates the title of the film. Much of these are extended scenes.

Rounding out the extras are the Theatrical Trailer, a TV Spot, VHS promo, and a Soundtrack Ad. Talk about fun. These Ads are hilarious and great. The VHS Promo made for retailers, which gives the hard sell for the movie and it’s funny how they try to sell, not to mention kinda racist (well very racist) when they call Leguizamo “Homeboy”, still trying to figure that one out.

To Wong Foo, Thanks for Everything Julie Newmar is a comedy classic.  Shout Factory has treated it as such giving it a marvelous transfer and fabulous extras.  HIGHEST POSSIBLE RECOMMENDATIONS!!!!

Shout Factory’s Blu-Ray Edition of
To Wong Foo, Thanks for Everything Julie Newmar is out May 28th