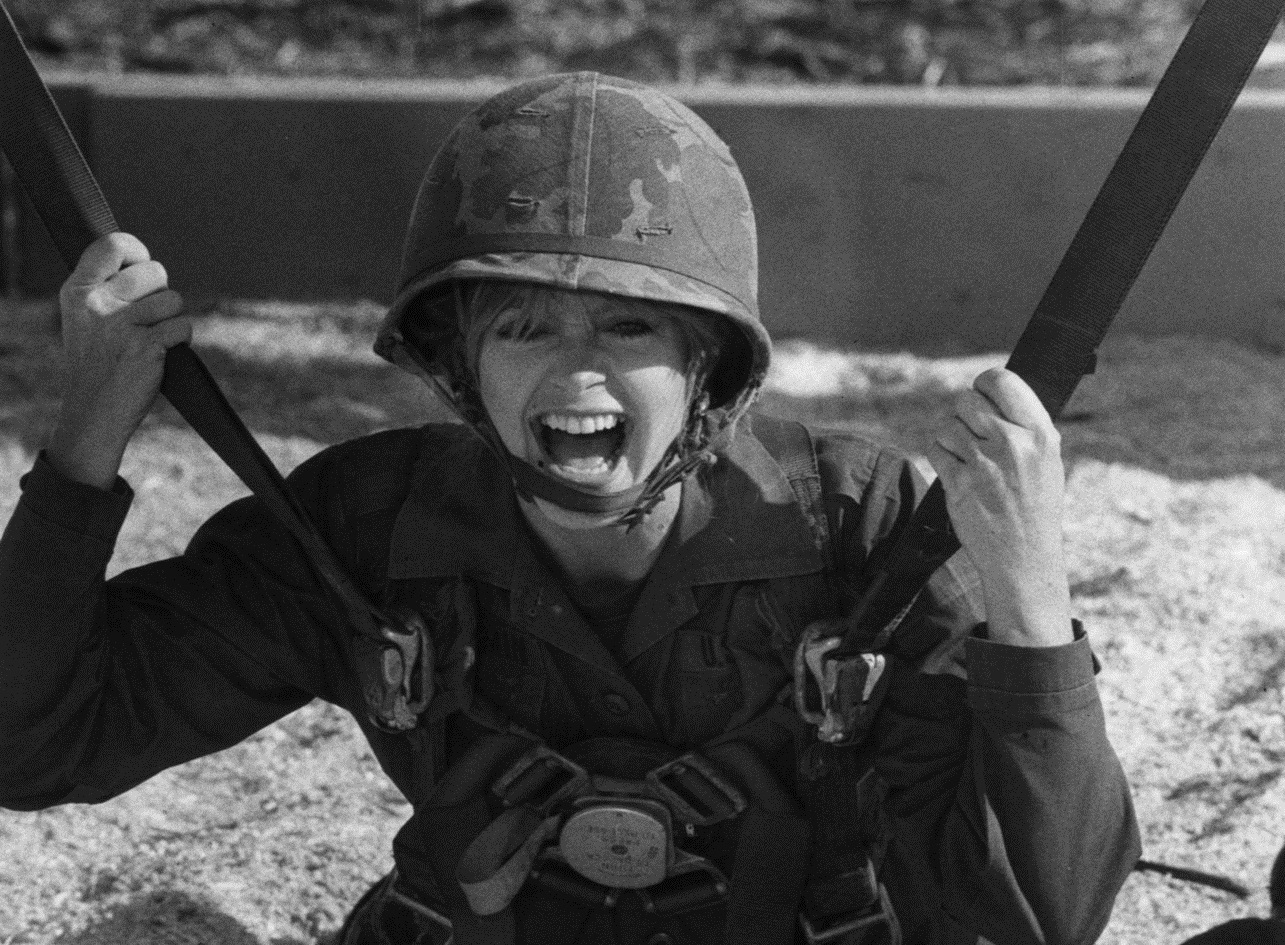 The Second Volume of Her Story continues with a look at Legendary Actress Goldie Hawn. Kristen looks at two of her most cutting Comedies.

For 52 years Goldie Hawn has dazzled us with her luminous smile, sparkling eyes, and comedic timing. She’s an actress who embodied the ‘60s flower child before transitioning into the type of comedic actress hearkening back to the classic era of the screwball comedy. And yet Hawn’s career has seen its fair share of changes as she’s transitioned to different levels in her life, honing her talents to always capture what women were expected to do, comedically. It’s worth examining two prominent features in her career as highlighting her ability to transform to meet the zeitgeist.

In 1980 Hawn starred as Judy Benjamin, a coddled rich girl whose only goal in life is to marry wealthy, to be taken care of in the feature film Private Benjamin. When her new husband dies on their wedding night Judy is left adrift, unable to figure out what to do now that she’s not someone’s wife or daughter. On a whim, she joins the military, but upon discovering the hard work it entails she wants to quit. Eventually, she’s fueled to stick with it, learning to triumph on her own.

Private Benjamin is a fascinating feature considering its placement, historically. By the late ‘70s, Hollywood had embraced second-wave feminism and was highlighting women in a variety of enhanced jobs. Studios understood women no longer wished to be defined by men and weren’t being neatly placed into women’s roles. Nancy Meyers and Charles Shyer’s script is all illustrating the crumbling system that’s led to the rise in feminism going on in the world. Judy is a woman who’s never been expected to amount to anything. Her father patronizes both her and her mother, cleanly falling into the role of breadwinner and his daughter being the doting daddy’s girl. It’s no surprise that Judy falls to pieces when her husband dies because she’s just one of many women cast adrift; if you lose one man, find another or perish.

Ironically it is a man who ends up putting Judy on the path to her own independence. Harry Dean Stanton’s role as Sgt. Jim Ballard is one built on false advertising. He exaggerates the cushy roles within the military in order to entice Judy to join, one of many men she meets who makes things sound wonderful only to present her with a bill of goods. But as Judy navigates the military she finds her own inner confidence. She’s able to foster friendships with other women who are all written against convention; the women flashing her bra is actually intelligent, there are women of color included.

Even the villain, Eileen Brennan’s Captain Lewis is given authenticity to her action. She dislikes Benjamin because of what she represents: entitlement, ditziness, the ways women have been told to act that have created these stereotypes. But as the film goes along, Captain Lewis is shown as desperately wanting to fit into a man’s world and is still persecuted for it. She falls for a fellow captain who ends up cheating on her with a woman considered more aesthetically pleasing. Lewis can’t please everybody. Is part of the reason she dislikes Benjamin because the blonde is interested in only making herself happy, no matter what others think?

In just ten years Private Benjamin would be considered revolutionary. As outlined in Susan Faludi’s book, Backlash, movies like Private Benjamin wouldn’t be made as we got closer to the ‘90s. The backlash against second-wave feminism would see movies made about women having to decide between family and career, the belief that they can’t “have it all,” as they say in Baby Boom. On the opposite side of that spectrum, women who were single and knew what they wanted were murderous, a la Fatal Attraction. A film like Private Benjamin, wherein Judy turns down marriage to a gorgeous man who allows her to feel sexual desire for maybe the first time in her life because he’s a jerk, would be anathema by 1990.

Private Benjamin gave Hawn the ability to remain bubbly and perky – a personality she’d cultivated throughout the ‘60s and ‘70s – while slowly showing her dramatic side. In 1992, when she starred as Helen Sharp in Robert Zemeckis’ Death Becomes Her, that effervescence would be shattered as little more than a front, transitioning Hawn into sharper, grittier characters. Death Becomes Her is a film that’s both dated and relevant, focusing on two frenemies (Hawn and Meryl Streep), who get the opportunity to remain forever young through the aid of a magical potion. But when their hatred for each other culminates with each murdering the other, they’re forced to find a way to endure with immortal bodies that are falling apart.

There’s a happiness found within Private Benjamin. Judy succeeds on her own terms, not just in her career but in her personal life. She doesn’t end up with a man but, more importantly, she discovers she doesn’t need a man in order to feel complete. Death Becomes Her undoes that mentality, positioning Helen and Streep’s Madeline Ashton as bitter enemies because two women can’t be friends. When Helen brings her fiance, Ernest (Bruce Willis) to meet Madeline, he’s immediately seduced by Madeline and leaves Helen. Helen becomes unhinged over this final betrayal and becomes intent on killing Madeline and getting her man back.

This is completely in line with Backlash-era cinema despite the fun and humor that’s derived from the film. Ernest is the one able to go off to a long, happy life, while Madeline and Helen are stuck with each other for eternity, the bitter hell that comes from being two catty ladies. There’s little said, ultimately, about the culture of beauty (created by men) that emphasizes young and beauty.

Yet Death Becomes Her is a critical feature for Hawn as a performer. After dabbling in serious dramas the year prior, the feature created the perfect blend of Hawn’s humor with the changing views of femininity. Gone was the giggling girl and in its place with a luminous comedienne who could make you laugh and stab you in the back. Her humor here comes from a place of sadness, vengeance, and pain. She doesn’t persevere over it with a smile like Private Benjamin but cuts through it. Her humor showed that being bright and perky was all a facade, hiding something darker. This would continue in works like The First Wives Club and The Banger Sisters, hardening Hawn into a woman who’s lived life and understood that there will always be a double standard.

Goldie Hawn took being an actress who could have relied on her looks and ran with it. She played the game the boys laid out for her but ended up positioning herself as a woman who used humor to tear down the system. Her career now is about doing what works for her. Best to have your own fun and not care about who’s watching.