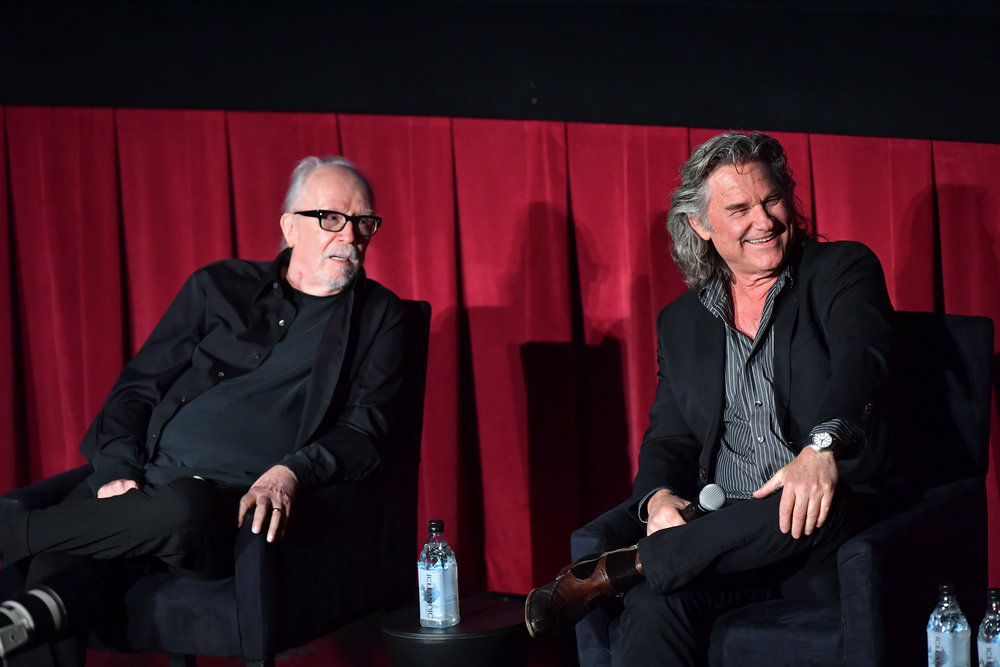 Saturday (Day Three) of TCM Film Festival 2019 leads to great film experiences and major frustrations. All the while Adam preaches two things; enjoy Cinema in all its shapes and forms and hydrate-hydrate-hydrate.

So, here’s the thing. You gotta stay hydrated at any festival (be it a film, music, wine, et. al.) it is the only rule that should be followed stringently. I mention this because on Saturday at the festival was the most challenging I’ve ever had. The lines had to be the worst I have seen at this Festival. This creates a good and bad response in me. Good, because it means more Festival and possibly a bigger Festival. Bad, because they were not equipped for the crowds. I honestly think this was “growing pains” and nothing more. A bit more crowd control and less letting people out of line will help greatly.

Far too often I was in a line that started great and once queue numbers were handed out… bedlam and worse none of the staff would help with these people clumped together thinking this would help them get into the screenings sooner. This disaster caused every line to feel over-crowded and like it was 95 degrees with 100% humidity. Not any place anyone wants to be. In these events, I always come prepared, and always preach to anyone attending their first Film Festival to make sure to carry a backpack with the essentials; water, water, and more water. Call this your public service announcement. Now, onto the show (s)Femme

What a way to start your morning; a strong cup of coffee and a B- movie goodness. George pal’s doomsday picture is the blueprint for every Roland Emmerich picture since Independence Day and just about every disaster film since it’s release in 1951. A group of Astronomers discovers a planet and its star are on a direct path to Earth. No escape, only a chance for a few to begin again with a daring plan of escape. Add in some top-of-the-line (for the time) FX work, a cliched (even for the time) romantic triangle, a terribly miscalculated villain and you’ve got yourself prime Event Film entertainment circa 1951. The best part of the picture is the odd chemistry of Barbara Rush as Joyce and Richard Derr as David have. Though they do work as romantic leads Derr’s David is one of the bigger meatheads to grace the Silver screen in the 1950s. Which is saying a lot considering there were some huge dummies in the 1950s. It’s Rush that does the heavy-lifting making us believe Joyce (who is all but a Doctor) would fall for this freight jockey. The film is handsomely shot and produced with that clean mid-century aesthetic of the time. If not seen, just wait a few more months as this film was recently restored by Paramount.

Before the film began we were treated to a Q&A session with Rush and guest moderator Dennis Miller. Miller appeared to be in quite a good mood as he professed to love Rush as a performer. Rush was also in a playful mood as she discussed making this film and others. At one moment she was asked by the crowd what it was like to kiss James Mason. Her response, “Ask him yourself!” to applause and laughter.

Tarzan and His Mate

Bless the pre-code era. The era that takes any non-Classic Film Fan and some Classic film fans by surprise. I am a part of the latter and not the former. Which I proudly sit. Part of the fun of this film festival for me is the genuine surprise and delight discoveries are. The biggest ones are always any Pre-code film I see. Tarzan and His Mate is one of those very films. This sequel to the Johnny Weissmuller-starring original is in every way the better film. The film pit Tarzan (Weissmuller) and Jane (Maureen O’ Sullivan) up against not just Cannibals but a gas lighting English Ivory Trader (a true special cleft asshole to be sure). This film has just about everything one could want not just a Tarzan movie but any adventure film. One can plainly see this was Lucas and Speilberg’s template for Indiana Jones. Many will delight in how much gore, sexuality, nudity, and general naughtiness that is in this film. Someone said this film would earn a PG-13 today, I don’t think so. This film in its restored pre-code glory would earn an R-rating today. Just on the nudity alone, never mind the arrows to the head of the gunshots to the head. Needless to say, there is a lot of fun in store for anyone that ventures into this series.

Before the film began we were treated to an amazing 30-minute LIVE making-of Tarzan And His Mate hosted by Ben Burtt. Make no mistake, this wasn’t some off-the-cuff monologue, the man came prepared with a full-on audio-visual presentation ran from his Macbook that showed various videos, playing back sound effects work, and stills all elaborating on his points. Burtt covered not only its influence on Sound and Sound design but the effects work in general and the production itself. It was a fascinating way to approach the Introduction.

This may go down as my favorite discovery of the festival. Blood Money is a ripe and bawdy film noir crackling with enough style and arsenic-laced dialog to kill any Femme Fatale or Confidence Man where they stand. A crooked Bait Bondsman (George Bancroft) meets his match in the Socialite (Frances Dee) with a mile-wide criminal kink streak. Dumping his current Night Club Manager boo-thang (Judith Anderson) is the first of many bad mistakes that lead to a truly dazzling third Act set piece involving a truly “magical” 8-ball. The film also from the pre-code era loves to revel in its kinkiness. The power dynamic between the male and female characters is fascinating when mixed in with causal sexuality and some truly bold S&M relationships. This film has more of an understanding of S&M than any of the 50 Shade of Grey film ever did. It is shocking in just how modern of a take the film is on men and women. Hopefully, more will discover this one.

Bruce Goldstein not only introduced the movie but did a post-screening wrap up on what was eventually censored. The introduction by Goldstein not just gave context to the film, that was produced at the tail end of the pre-code era, entering into the Hayes Code era. He also discussed how the Formation of 20th Century Fox played into the making of the film as well. The post-screening wrap-up was hilarious to watch what was cut by which State-ran censor board. I will say this much… Ohio did not like anything in the 1930s. Maybe it had to do with dealing with John Dillinger so much.

One would call it the ultimate Geek Sophie’s Choice; see either Star Wars: A New Hope or John Carpenter’s Escape From New York. Yes, I love Star Wars. But I did not name my dog Skywalker or Han or Vader. No, I named my dog Plissken. So, this was no choice at all. Now, you know the movie. I won’t recount plot points with you. This like Star Wars influenced a generation Escape from New York did so as well. It also made Kurt Russell into the Icon he is today. It is one of those films that just oozes cool and punk rock attitude at every turn. It’s as badass and badass cinema gets. What probably really want to know is about the restoration by the fine folk at StudioCanal. Short answer; it is beautiful! Run out to see it if there is a screening close to you, once it’s out in the US on UHD buy it, etc. The 4K DCP with Dolby Vision is the best I have seen the film look on the big screen. The work is without approach, the color reproduction (thanks Dolby Vision) adds a new layer of clarity and sheen to the film.

Full disclosure, I have seen this restoration. I was one of the folks that shelled out the money to buy the StudioCanal 4k UHD limited editions sets. As beautiful as the sets, nothing compares to seeing it on the big screen. Bravo to StudioCanal for taking the time and money to produce this restoration.

The other reason to attend this screening was the pre-screening with John Carpenter and Kurt Russell. Both men were in fine form having the entire audience at rapt attention. My favorite moment came when asked about a third installment of the series. Russell in true Kurt Russell fashion said this; “I don’t know… I mean at this point it would be Escape from the Geriatric Home!”

After a full day of films, lines, frustrations, triumphs, Kurt Russell ( and Tarzan I had to call it. After the Friday Night debacle of a Midnight movie, I decided to head home. Added to the fact The Nurses isn’t great (and softcore just isn’t my thing).

Adam will be back to wrap up the coverage for 2019 with the last day of the festival. Parting is such sweet sorrow but until then…