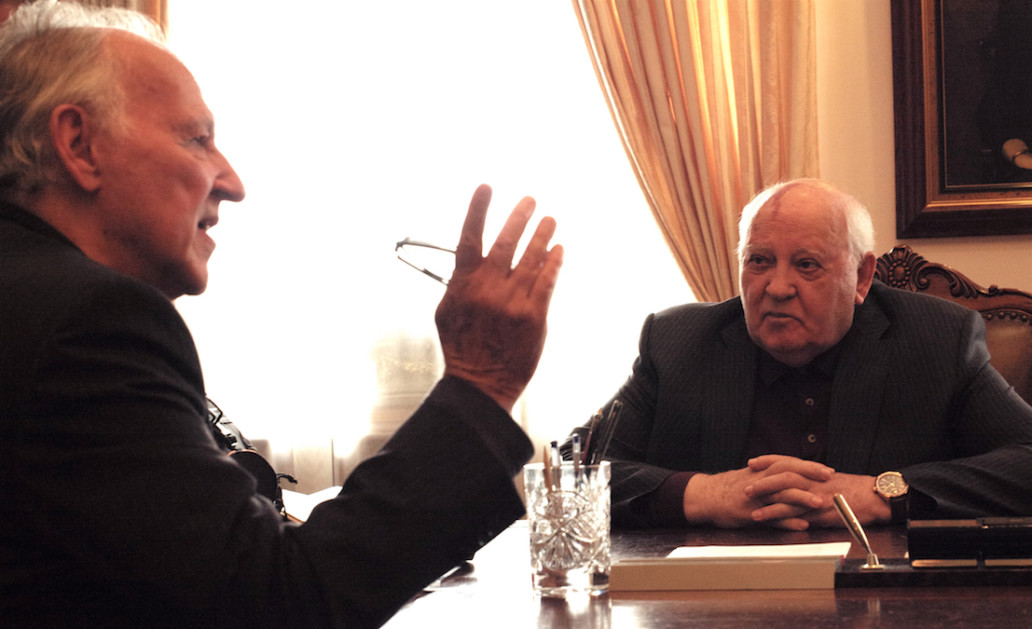 Werner Herzog strikes again, bringing his own style to a conversation with the tragic modern figure that is Mikhail Sergeyevich Gorbachev. In this the final film of Marie’s Manchester Film Festival coverage.

Meeting Gorbachev is a conversation (filmed over three sessions spanning 6 months) between Werner Herzog and Mikhail Gorbachev, a man under whose watch the Soviet Union came undone – and depending on which side you were on this makes him either a visionary or a traitor.

Gorbachev himself is a twinkly-eyed 87-year-old, with a few health issues and a love of fine chocolate. He considers his answers carefully, responds with clarity, and readily shares details of some of the most highly-charged international and domestic situations in which he found himself over his long political career.

Herzog’s trademark narration and interviewing signposts the various events in the life of the Soviet leader, from his humble beginnings in a remote rural area to his central role in global denuclearisation talks. It’s a fairly straightforward biographical documentary, but the fact that its subject is such a fascinating character is what makes this such an interesting watch. To Western eyes, the changes that Gorbachev oversaw in Eastern Europe appear those of an enlightened man aiming to make the world a better place. But in the view of his Soviet comrades, he betrayed his country in his attempts to democratise it and solve the economic issues of the time. It’s clear that Gorbachev himself is still torn by his role in events, and he voices his disappointments to Herzog. Herzog’s own personal touch is to stress the importance to him, as a German, of the role Gorbachev played in the reunification of Germany in 1990 and to express his gratitude.

And so as far as Meeting Gorbachev goes, it’s a must-see for anyone with an interest in the politics of the time. But there are also some glaring omissions. There’s a fleeting Putin cameo which sends a shudder, and I would have liked to have heard Gorbachev’s views on what’s happening in Russia today but the conversation neatly stopped without reaching this discussion point.

Strangely, the final minutes seem to belong to a different type of documentary completely. Having spent the majority of time in detailed political conversation, Herzog chooses a most saccharine and emotional ending which did not seem like it belonged, even feeling a little exploitative.

Take these final minutes out of the equation, and Herzog delivers an intriguing conversation with a man who was at the peak of his influence in some of the most interesting years of modern history.