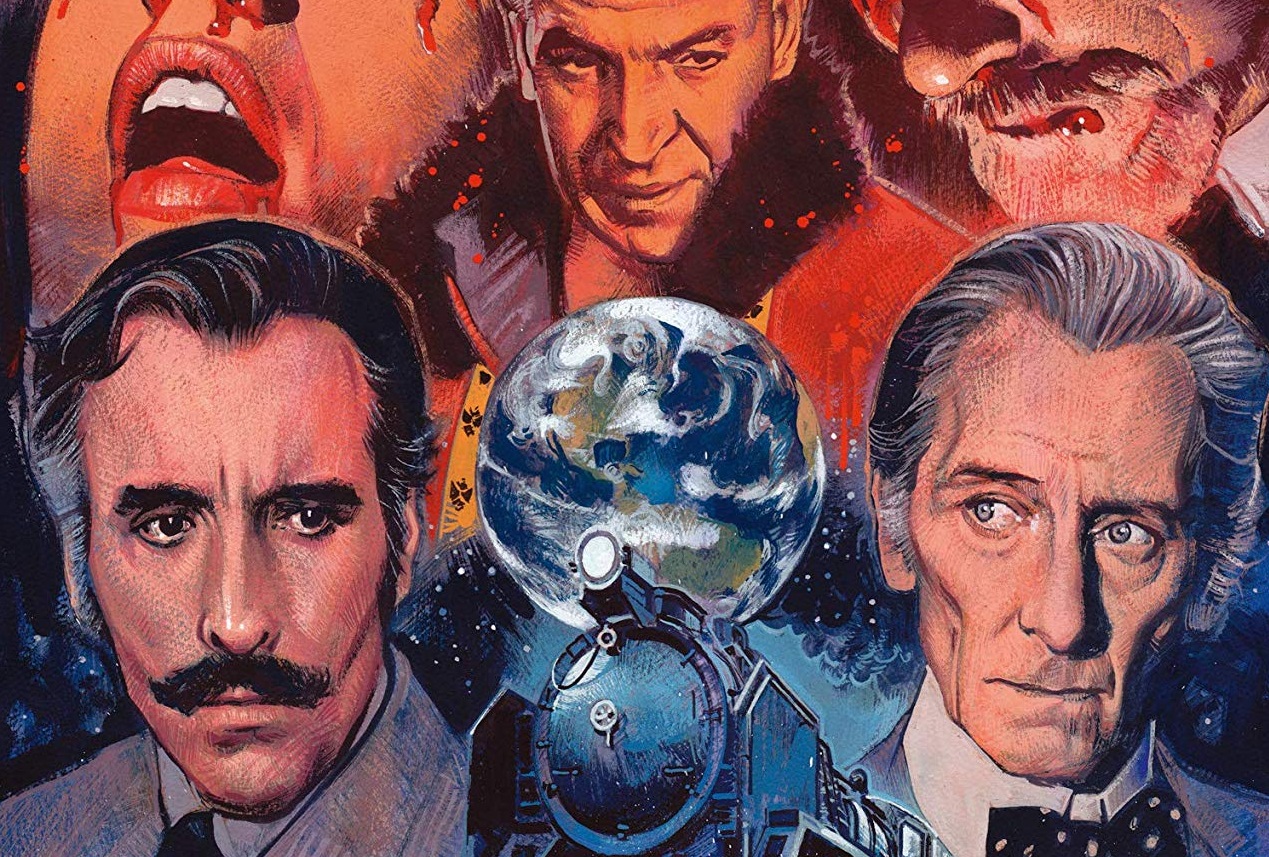 Adam falls in love with another Film that uses the Source Material, Who Goes There? as its inspiration. This time instead of Kurt Russell, it’s a Star Vehicle for Christopher Lee and Peter Cushing. New on Blu-Ray from Arrow Video.

What an unexpected treat Horror Express is. A film that feels like a Hammer Horror but isn’t. A film that jumps from genre to genre so adroitly you’ll wonder why more movies don’t. A film with some truly great Gore FXs but not so great Creature FXs. A film with not so great, but all the same really great, model work. Most of All; a film where Christopher Lee and Peter Cushing are not enemies but rather men who must work together. That is just a bit of Horror Express and the delights in store for the most adventurous of filmgoers.

Dr. Saxton (Lee), an anthropologist, while on a dig in China finds what he thinks is the “missing link”. Taking his prize via the Trans-Siberian Express back to England turns out to be more than he or anyone bargained for. This missing link is neither “missing” nor “link” to human beings but rather a harbinger of death and destruction for the entire world (possibly). With the help of a friend/rival Dr. Wells (Cushing), Dr. Saxton must stop this Evil in its many forms it takes before the train arrives in civilization.

All one needs to know to truly understand the treat you are in for is the film is directed by” Gene Martin” aka Eugenio Martín. The Spanish director brings the type of European flair to the proceedings that someone like Enzo Castellari brings to his productions. It’s that sort of style over substance and the passionate belief in the story no matter how ridiculous or illogical it may appear.  That ability makes even the most ridiculous plot twist feasible in Horror Express. If one has seen his truly crazy Pancho Villa starring Telly Savalas and Clint Walker to understand the sort of freewheeling style that Martín brings to everything here.

Most will come for the iconic pairing of Lee and Cushing. The duo does not disappoint. Both men do outstanding work as healthy rivals that are forced to work together. Lee seems to be having a ball as the hero of the piece; part tweed professor, part swashbuckling getting too old for this Hero (e.g. a proto-Indiana Jones). Cushing is all dry wit and English Charm as Lee’s counterpart. One wishes the men got to work together more like this, with this kind of script, as the chemistry between the two men is better than most Romantic Comedy pairings.

That is not to even mention the scene chewing that is the third act appearance of Telly Savalas as Captain Kazan.  Savalas comes in swinging big swings that both Lee’s and Cushing’s reaction shots to are just about the funniest reactions in this reviewer’s recent memory.  Though viewer be warned when the credits state “And a Special Appearance by Telly Savalas” it truly lives up to that “and…” part as he really does not show up until the final act.

Horror Express is the kind of forgotten European B-Movie one hopes to find but rarely does find.  A film with that rare correct mixture of genres, humor, gore, and actors to create something truly special. Make sure to watch it late at night with your favorite libation.

The Brand new 2K restoration from original film elements is beautiful and downright amazing.  Having researched for this piece and finding old VHS, this is light years beyond that iteration.  Even the older Blu-Ray edition this Arrow restoration is miles ahead of.  Most of the scratches, specs of dirt and general wornness are gone from the Arrow Transfer.  The color timing is been readjusted and the grain structure has been reinstated giving the transfer an all-around better look.  This is by far and away the best that Horror Express has ever looked, including during its theatrical run (which by accounts in the Special Features was a very-very-very limited run).

The Commentary by Steve Jones and Kim Newman is a great one. Jones and Newman are jovial throughout discussing this very different and sometimes looney film. They definitely have a great time dispensing information about the film and some great production anecdotes.

Ticket to Die is an 8-minute “appreciation” from Steve Haberman. The director discusses the social lead up to the change in style in Hammer Horror. Also discusses the film and performances, and just how crazy this film is. It’s releasing not only in the UK but the trouble in the US release.

Night Train to Nowhere is a 15-minute interview with filmmaker Ted Newsom. Specifically, he discusses Bernard Gordon, the producer of Horror Train. The interview really does delve into Gordon’s life. How he was Blacklisted, named names, was a communist, had to get a front, and started producing films and specifically Horror Train, a lot of which has been informed from his life (per Newsom).

Murder on the Trans-Siberian Express is a 14-minute interview with director Eugenio Martín aka Gene Martin. Begins with the origins of the film with a producer having access to a train and looking for a story to build around it.

Notes from the Blacklist is a 30-minute interview with producer Bernard Gordon and specifically the Blacklist era. It’s a fascinating interview of a working Hollywood writer of the era. Stating with the attempted union busting of the early 50s to his success at getting work as a writer to the Blacklisting.

Telly and Me is an 8-minute interview with composer John Cacavas. The composer discusses his origins and his work with Telly Savalas. It’s a highly entertaining interview about how he came to be a composer.

Rounding out the special features are a theatrical trailer

Horror Express is a delight if you’re a horror fan or just a Lee and Cushing fan.  Arrow has given it the deluxe treatment with extras and a beautiful new transfer.  HIGH RECOMMENDATION!!!

Arrow Video’s Blu-Ray Edition of Horror Express is out on now!