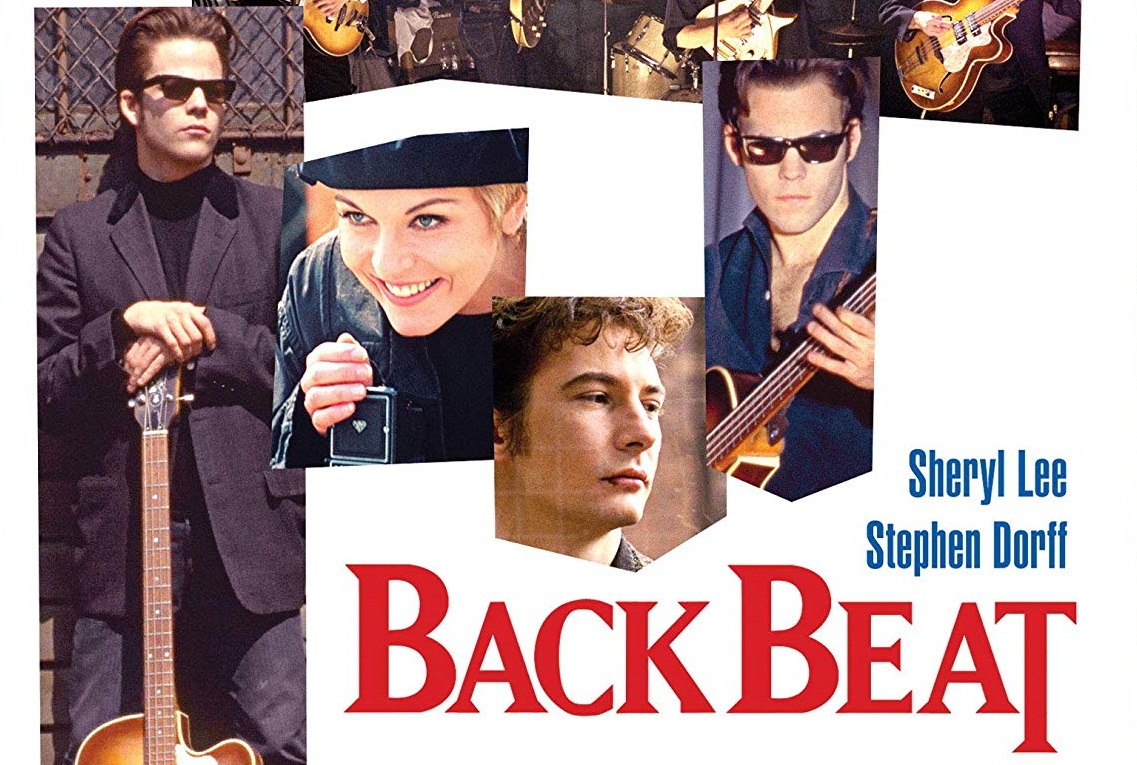 Adam falls in love with Backbeat all over again.  The film being released by Shout Factory’s label Shout Select is not just a Beatles biopic but so much more.  The edition comes with a new transfer and a host of extras.

Rather than attempt the jarring task of doing a definitive Beatles bio-pic director Iain Softley and Co. have created a microscopic prologue to the fame, fortune and mania. The fruits of their labor are a beautiful ode to love, art, rock ‘n roll, and the fleeting nature of life. It also may be one of the most accurate portrait of how the Beatles actually were than any of the sanitized documentaries that have been produced.

As much as a doom punk rock lore story as Sid and Nancy was, Backbeat tolls the lore affair between Stu Sutcliffe and Astrid Kirchherr. Sutcliffe was the first bassist of the Beatles as they made their way in Hamburg. As Stu an Astrid begin their love affair we a privy to the Up’s and Down’s of the most famous pop bands of all-time. We see John, Paul, George, and Ringo (in a tiny Cameo) unfiltered. John is a hot head. Paul is an asshole without compassion. George is a mama’s boy (and only 17 at the time). This is not the band that would drive girls into a frenzy, but rather young guys with big egos and bigger appetites for drugs and girls. The film charts their micro-ascent before superstardom and it is possible the best way to approach them. They could have easily torn them all down but they don’t. The film chooses to view them through Sutcliffe’s eyes which allows for a unique “left of center” characterization of all the fab four.

Much of the praise, at the time, went to Ian Hart for his performance as young John Lennon and justifiably so. More than 25-years later everyone failed both Sheryl Lee and Stephen Dorff for the amazing and sensitive worked as the doomed lovers. Lee is amazing as Kirchherr the German artist said to have been an intrigal part of their stylistic evolution. There is a quiet strength that Lee plays Kirchherr with that should have gotten her much more work and made her more in demand. The same goes for Dorff, who is work as Sutcliffe is the best he had done up until that time. For my money his accent works, so much so, I did not once notice or it in the same way that other American Actors throw me out of a film.

Director Iain Softley brings an uncommon complexity to the film that another director wouldn’t have attempted. By going for the rich emotional relationships between Astrid and Stu, Stu and John, and Stu and the Band the director and screenwriters make the smartest decision because everything about “The Beatles “Is in the background. Who needs everything we know recounted to us. Backbeat understands this and excels at deftly veering right rather that left its entire running time.

The chemistry between the two though is the “main star” of the film. One has to wonder why this has not been rediscovered as one of the truly best romances of the 1990’s. Backbeat does deliver on the music bio-pic troupe to satisfy any fan of the genre but it is its complex relationships and doomed love affair that will make this one stand above even the greats of the genre.

The transfer provided by Universal appears to be the same one that they used for their DVD release.  The transfer does benefit greatly by the up in resolution on Blu-Ray.  There is a bit of DNR present making the look at times feel washed of grain. The good news is that the transfer’s contrast levels are beautiful.  Anyone that has seen the film will find this a relief because the darker nature of the cinematography and Ian Wilson’s use of harsh overhead lighting could have been tricky.

The commentary featuring Iain Softley, and actors Ian Hart and Stephen Dorff. The group is relaxed but loquacious. Recorded in 2003 (for the DVD edition) the topics range from the production, the music, the rehearsal process, and even some person at anecdotes from all three. Softley is definitely the lead commentator discussing his struggles and theories on the film itself. An altogether solid track.

The Deleted Scenes amount to 3- minutes and 2 scenes. Nothing that shouldn’t have been cut from the film. Especially the German’s don’t have sense of humor scene.  Another is a sex scene between Dorff and Lee, which again was rightfully cut.

Interview with Director Iain Softley and Ian Hart is a 10-minute discussion with the director and star. The featurette is a relaxed conversation about the making-of the film. Both agree on how tough the shoot was. They do go through most of the film with detail during the 10-minutes runtime. They do talk about, albeit all-too briefly, Don Was’ involvement with producing the music.

Iain Softley interview for The Sundance Channel is a 28-minute archival interview. Softley discusses in great detail the origins of his script and how he came about getting permission and also how he developed the story and what he wanted to say. The director is quite honest about how the elements of the story came about. Specifically, the love triangle betwixt John, Stuart, and Astrid. Other interesting tidbits about the film and the production; how they almost deleted all mentions of the Beatles and its member’s by full name, the amount that Astrid Kirchherr was involved with the production, how he and Hart developed the role of John Lennon (interestingly, Hart had played Lennon in another film), how he helped Stephen Dorff with the Liverpool accent, and a pretty detailed account of how the great soundtrack and “housebound” came together.

The TV Featurette is a great vintage making-of EPK-style 12-minute featurette. Ian Hart, Sheryl Lee, Stephen Dorff, all contribute to the making-of. It cannot be understated how great it is that Shout Factory takes the time and effort to find these truly wonderful treasures of a bygone era.

Casting Session is a 7- minute featurette that is broken down between actors Stephen Dorff, Gary Blacckwell (who plays Paul McCartney), Wolf Kahler (who plays the Polydor Executive), Best of all they have included some of “the band’s” rehearsal footage.

Rounding out the special features is a Trailer.

Backbeat is a great romance and musical bio-pic. Shout Select has given it a new coat with its upgraded Blu-Ray edition. HIGH RECOMMENDATION!!!