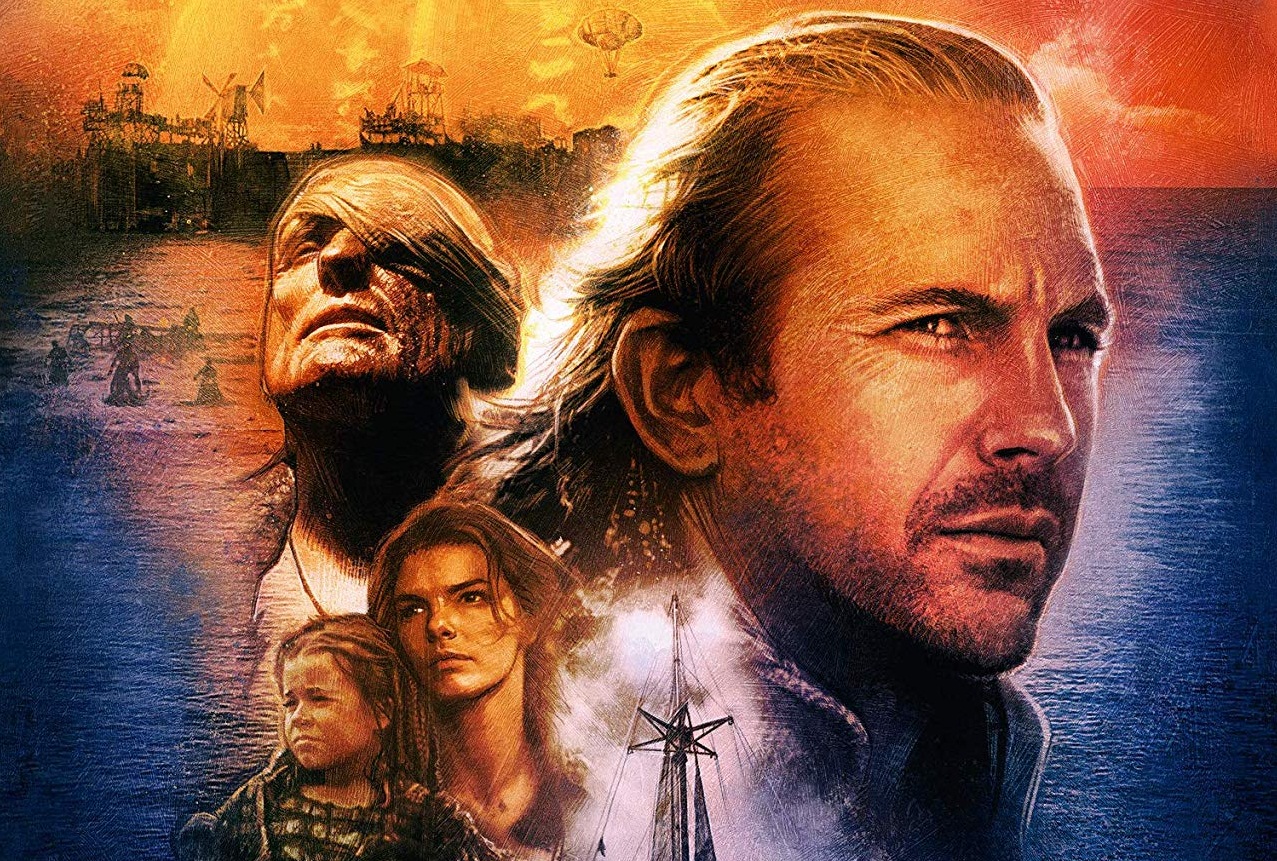 Adam’s always loved Waterworld, it just going to take Arrow Video’s beautiful, robust, filled to the brim limited edition Blu-Ray to make everyone else respect it.

NOTE: This is a discussion of the three cuts included on this release.

After all, is said and written about Waterworld rarely discussed is that it is a solid action-adventure film. More so than a solid one, Waterworld, I s dare I say good??? Yes, I have no qualms with saying it is a good film, that is ultimately wrapped up in people’s bullshit about budget and the behind-the-scenes gossip.

Set hundreds of years in the future the polar ice caps have melted. This had led to the few remaining humans to search for the mythic “Dry Land”. Though this search has continued on with no avail. As the plot dictates a loner, the Mariner (Kevin Costner), sails into an atoll where a young girl (Tina Morjorino) with a tattoo to where “Dry Land” could be. Forced to help her and her ward (Jeanne Tripplehorn) find their way to that mythic “Dry Land”. While keeping them safe from the Smokers lead by the Deacon (Dennis Hopper).

Even during its initial theatrical run, this reviewer did not understand the venom laid at this film. Waterworld in its theatrical form is a fun albeit odd story. Part of the oddity comes from underdeveloped B and C storylines. Costner is in full-on Anti-hero mode here without much support in the theatrical version. The Mariner is a gigantic asshole most of the runtime of the film. The arc of redemption is played within one scene. Nothing more. It zigs so hard you can’t help but laugh because there is no natural transition or lead up. Just, BOOM… HERO TIME!

In the TV and Extended Versions, this problem is all but solved. The time that is spent with the Mariner, Enola, and Helen as this forced upon family is vital for the transition. Adding that 40-minutes (the film clocked in at 3-hours in both alt versions) help the film transition the Mariner from a loner with no value for humans to someone who cares for at least one. These versions allow for an audience to understand The Mariner’s Point of View not just from the get-go but the entire first half. Much of the time spent on the atoll is different, there more moments and shots of the citizens of this floating water city unsure of this loner. The character is treated much more harshly and with suspicion by everyone.

Point, in fact, the longer cuts are the way to go. Both 40-minutes longer but well worth the time to watch. Part of the reason why these versions are better are because their Star/Producer and Director intended Waterworld to be a longer “Event Film”. Costner and Reynolds both suffer from Epic-chitis, where one cannot tell a story on film with anything less than a 2 ½  hours.

Here it is all but apparent as the theatrical cut does have plot and character issues where the other versions do not. Much can be said about Waterworld in its longer forms but it cannot be criticized for lacking a full narrative and well-rounded characters. In its longer form both Star/Producer and Director are satisfied. In its theatrical form Waterworld is more of an argument between its Star/Producer wanting one film and its Director wanting another.

Waterworld is mid-90’s Event filmmaking at its finest. Drop your preconceived notions of what an over-bloated production it was. Rather enjoy a $175 million film the likes we will never see again. Revel in its excessive design and stunt work which are truly impressive twenty-five-years later. T hat is the magic of Waterworld; big everything.

Arrow Video has created a 4K transfer of the original negative on the Theatrical Cut of the film.  The results are a giant leap forward for that cut of the film.  The original Universal Blu-Ray was atrocious suffering from their over DNR-ing making sure every single piece of grain is all but erased.  Here cinematographer Dean Semler’s sun-soaked photography is beautifully reproduced with a healthy amount of grain.  Both the TV Cut and the Extended edition (aka Ulysses Cut) both get upgrades in quality but nowhere near the work that was done to the theatrical cut.  This is not a dig or a critique as both cuts were finished in HD but not on Film from the research I have done.  Because of their origins, this is probably the best, barring Universal agreeing to let Reynolds or Costner recut the film.

DISC ONE – THE THEATRICAL CUT

Maelstrom: The Odyssey of Waterworld is a 107-min making-of documentary.  Featuring comments by director Kevin Reynolds, writer Peter Rader, producer Charles Gordon, cinematographer Dean Semler, script supervisor Anna Maria Quintana, production designer Dennis Gassner and many more including archival interviews with Kevin Costner, Jeanne Tripplehorn, and the late great Dennis Hopper.  This is the kind of honest behind the scenes making-of you would hope fills every special edition you open.  The documentary covers everything from Rader’s first script, the development, Costner coming onto the project, the massive production, criticism by the media… everything is covered.  It’s done with level-headed honesty that doesn’t feel like people are with grudges but just a very taxing shoot.  We will never get what really happened during this production but this is the closest we probably will.  Note; Reynolds mentions his film Rapa-Nui, watch this film and hope that Arrow or someone decides to do a special edition of that film as the stories about that production pale in comparison to Waterworld.

Dances with Wolves is a 9-minute archival featurette EPK with onset interviews with Tripplehorn, Costner, Hopper, Reynolds, Majorino, Gordon, Semler, and Gassner. The primary focus is the Atoll set and the massive undertaking it was.

Global Warnings is a 22-minute visual essay with film critic Glenn Kenny where he discusses the various films of the Ecological End of World, of the Post-Apocalyptic sub-genre.  Using films like Things to Come, When World Collide, The Day the Earth Caught Fire as reference points Kenny moves through the evolution of sub-genre. The Birds and Hitchcock are discussed and how nature turns against humanity. Kenny even manages to discuss Costner’s own The Postman.  A fascinating and thorough trip through the sub-genre.

Rounding out the extras are the Original trailers and TV spots, Production, promotional stills gallery, and a Visual effects stills gallery.  The Original Teaser and Theatrical Trailers are both great examples of what a Teaser and Trailer should be.  The TV Spots are hilarious and should not be missed. The galleries of stills are definitely going to be of interest to those that adore the film.

3 Cuts of the film, Massive Behind-The-Scenes Documentary, solid transfers no one but Arrow Video would dare tackle Waterworld.  The fanbase for the film will be pleased by the time and effort that has been put into this truly special release.  Arrow has come out swinging in 2019 with this definitive edition of Waterworld and their edition of Crimson Peak.  HIGHEST POSSIBLE RECOMMENDATIONS!!!