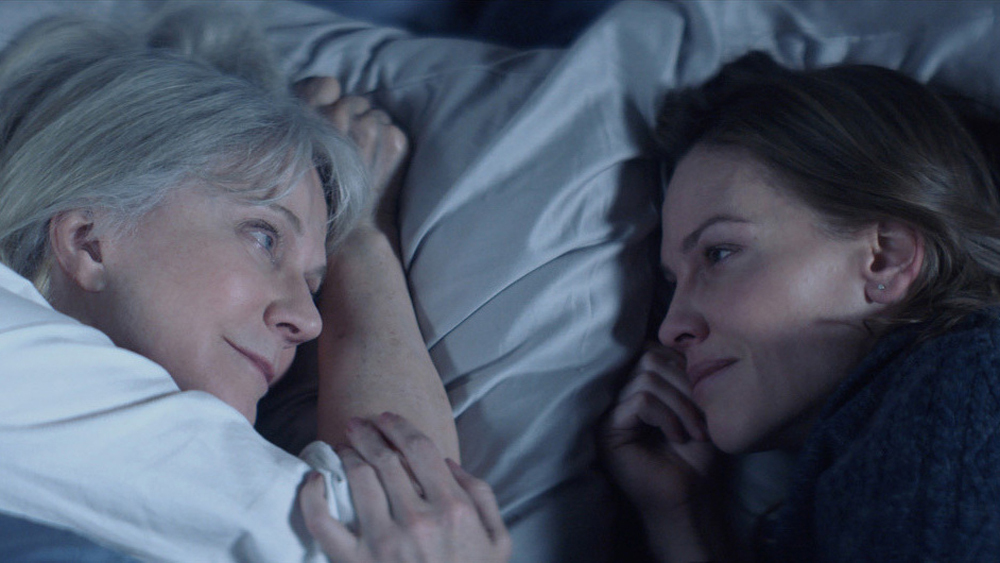 Dementia Takes Its Toll on a Family in This Familiar Tale

What They Had, the directorial debut of actress Elizabeth Chomko, is another in a long line of films about dementia and its effect on extended families.  The Notebook (2004), Away From Her (2006), Still Mine (2012), Still Alice (2014), The Leisure Seeker (2017), and dozens of others have trod this same cinematic ground to similar effect.  What They Had is rescued from certain obscurity by its stellar cast.  Michael Shannon, Hilary Swank, Robert Forster, Blythe Danner and Taissa Farmiga combine to make the familiar interesting again.  Or they at least make it imminently watchable.

Ruth (Blythe Danner) suffers from some form of dementia (no one ever says the “A” word).  She lives in a condo in Chicago with Burt (Robert Forster), her husband of 40-plus years.  In the opening moments of the film, Ruth slips out of bed and heads out the front door into a snowstorm in her bathrobe.  Enter the concerned children:  Bridget (Hilary Swank) and Nick (Michael Shannon).  Nick has helped manage his mother’s dementia and knows its time for her to enter a facility for her own safety.  His father refuses.  Drama ensues.

That may sound dismissive.  I’m certainly not mocking this film.  Anyone who knows me knows that I have a mother in the hospice stages of Alzheimer’s Disease, so I’m certainly not poking fun at a movie about the horrific effects of dementia.  As the only child of a divorced mother, I’ve lived with that horror for years.  What They Had is just frustratingly bland, a very plain story crafted from potentially rich material.

Bridget has a failing marriage that is juxtaposed against her parents’ decades-long relationship.  Nick wants the approval of his father, but has to fight him constantly over his mother’s care.  The sibling who lives in town resents the sibling who can flit in and out of town at will.  It’s a series of basic conflicts that head in the most predictable directions.

The film’s virtues lie in its performances.  It’s a treat to see Michael Shannon shed his edgy persona and play a real flesh-and-blood person instead of another in a long line of psychotic freak shows.  And God bless Quentin Tarantino for rediscovering the pleasures of Robert Forster (Jackie Brown) and launching the actor into the third act of his career.  His portrayal of the dedicated husband who watches as his spouse slowly fades away is both tough as nails and heartbreakingly tender.  Great performances from average films rarely garner year-end awards, but Forster’s work in this film is one of the better supporting performances of the year.

Lack of originality and predictability are criticisms born from seeing hundreds of films a year.  Such complaints can often come across as a cynical or mean-spirited.  Many readers scream that we should review films for what they are and not what we think they should be.  What They Had is well-made.  It simply doesn’t stand out from the pack.  Maybe it’s because I’ve recently seen Lynne Ramsay’s brilliant Private Lives, but as I watched What They Had, I kept thinking I really need to re-watch The Savages (2007), a truly unique take on dementia and one generation giving way to the next.

What they Had is in limited release now

3 comments on “Film Review: What They Had”