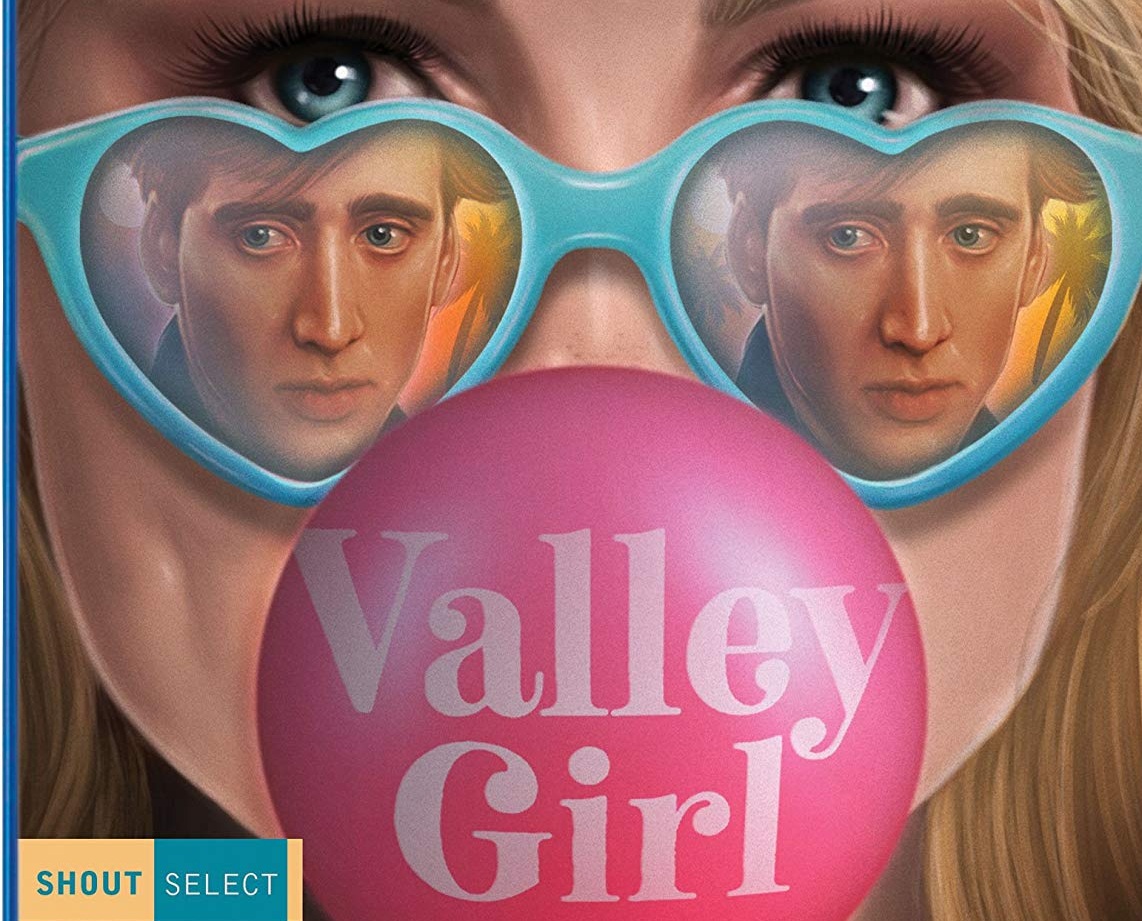 Adam thinks Valley Girl is totally tubular in this new edition from Shout Factory’s Shout Select that comes with an impressive array of extras and a new 4K Transfer.

Martha Coolidge’s Valley Girl makes it look easy.  Though there is nothing easy about what Valley Girl does as a film.  A teenage romance that adds a layer of social commentary about the pressures girl’s face.  Not just a good Teen film of the 80’s, Valley Girl stands with Say Anything… and Fast Times at Ridgemont High as the very best of the teen film genre.

Many’s peoples view on the San Fernando Valley come directly from this film (and the Frank Zappa song).  Ditzy girls talking ditzy speak is what they remember.  What they do not remember is Valley Girl though an adroit remake of the Romeo and Juliet troupe takes those supposed Valley Girls many who label as “ditzy” and imbue them with life well beyond the stereotype.  A film that is alternately a romance between Julie (Deborah Foreman) and Randy (Nic Cage), and the social pressure that erupts in Julie’s life because of that.  Though the story is critical of these teenagers in the way they treat Julie it never feels judgmental towards their own life choices and how they interact in social cliques.

Coolidge’s film is one of the few of the era that treats their female characters with the utmost respect.  Even when they do show moments where the girls are put into compromising situations the film always sides with the female’s point of view.  Valley Girl is one of the rare films from the 1980’s that gives young women a voice.  That unique point of view that shows true sensitivity.  Not just in how teenage girls relate to one another but just how awful young women can be treated at the hands of boys with no respect for them.  The scene between EG Daily and Michael Bowen’s characters is a prime example of this.  A scene that turns from playful to truly horrifying in a few moments because Bowen’s Tommy doesn’t get what he wants from Daily’s Loryn.  So many more popular teenage films could learn a lesson or two in the way that after the scene is finished how Coolidge’s film stays with Loryn for a few more solitary moments.  It’s those moments and a lot more like them that makes Valley Girl so special.

None of that would matter if Foreman and Cage did not generate chemistry to carry the film.  They do, oh do they ever.  Cage rarely has connected with his female co-stars in the way he has with Foreman.  Their moments are built with silence and awkward exchanges as they first meet and begin to interact.  It’s rare that the standard “meet cute” works in these ventures but here Coolidge gives the actors space to be awkward and interact and make it real.  She understands its these moments that set up the entire film.  By stopping the plot and becoming something more akin to Before Sunrise we are allowed to get to know and truly care about Julie and Randy.  Modern teenage romances could take a note or fifty from Valley Girl.

When the film does happen to break up the couple there’s a true sense of realism that the film handles this moment with. That is ultimately what makes Valley Girl so special.  Few films have the sensitivity and understanding of teenagers, fewer still have the respect that Valley Girl holds for its subjects.  Yes, we know there’s a happy ending for Julie and Randy but that’s what we want because they’ve earned it.  Add in a kick-ass soundtrack, a truly great turns by Daily, Bowen, with huge supporting assists by Coleen Camp and Fredric Forrest and you get a truly special film.

The new Mastered From 4k Scan of the Original Negative transfer that Shout Factory has created for this release is another home run.  The transfer beautifully reproduces the neon-soaked cinematography by Frederick Elmes.  The 4K scan has produced a beautiful image that reveals more information than any other home video version.  The previous DVD though nice for the era (it was produced over 15 years ago) is almost a dinosaur when comparing this Blu-Ray.  One word of note, the film has always been heavy on grain and Shout has smartly decided to retain that grain structure for the most part. This is a great a transfer as you can ask for.  Shout continues to amazing with the care and sensitivity they take with the titles they acquire.

NOTE: The film is being released with the entire original soundtrack intact.  This is a huge deal because of the rights issues Valley Girl has been compromised on just about every release since it was first put out on Home Video.

Valley Girl in Conversation is a 50 minute sit down conversation between Director Martha Coolidge, and Stars Heidi Holicker and EG Daly. The approach is unique as they shoot it with multiple cameras and use split screens during various points of the interview.  The three ladies discuss everything from the origins of the film project to how they each became involved.  It’s a thorough discussion with frank talk about the nudity in the film and the requirements from the studio involved.  Overall a solid interview.

Greetings from the San Fernando Valley is a 19-minute new featurette that begins with Nic Cage tearing apart the San Fernando Valley (ironic as the man is in a neon lime green snakeskin jacket). Though a bit of cheeky fun, this featurette is actually a thorough discussion about the history and origins of the place everyone calls “The Valley”. Timmy Gelinas of The Valley Relics Museum. Discussing the iconic places like Du-par (a restaurant that has long since gone), the Sherman Oaks Galleria (which only the face was used as the interiors of the mall was already used for Fast Times at Ridgemont High). They go over some of the histories of the Valley. Great photos and footage of the valley. As someone who has lived here for my entire life, there are some great discoveries and things I did know. The Bad News Bears, Karate Kid filmed here. Famous people like Desi Arnaz and Lucile Ball and Clark Gable that lived here.

Hide and Seek is a 5-minute featurette with Heidi Holicker sharing her various Souvenirs from Valley Girl with director Martha Coolidge. Including a letter that Coolidge wrote to her after the production wrapped.

Storyboard to Film Comparison is an 11-minute new featurette where Coolidge intro her use of storyboard (she was inspired by her time working with Legendary Director Robert Wise). They go into the actual broads to film. The featurette does split screen comparisons with the script and storyboards with the film actually playing out at the bottom of the screen.

In Conversation: Martha Coolidge and Nicolas Cage is a 20-minute conversation. It is everything you’d expect from Prime Cage interview with him appearing in a lime green snakeskin jacket. It’s a jovial conversation recalling various production issues and stories. You can definitely feel the love

Cage has for Coolidge and this first great role/film. Which Cage is very honest about his process currently and during the film, including the famous wax flute.

20 Totally Tubular Years Later is a 24-minute featurette making-of documentary with the entirety of the cast and producers on hand. Ported over from the Valley Girl Special Edition DVD this making-of is great. The cast and crew recount the making of from Coolidge discussing her two failed projects that came before to having this script fall in their lap. The casting of the various actors. To the production and interesting stories. To the legend of Valley Girl beyond the initial release.

The Parents is 43-minutes of extra interview material with Lee Purcell, Fredric Forrest, and Coleen Camp. Much similar to the previous it’s the extra material that was created for the 2003 DVD special features.

The Bands is 54-minutes of extra interviews with Richard Blade, Peter Case, Josie Cotton, Robbie Grey with additional comments by Nic Cage. Much similar to the previous it’s the extra material that was created for the 2003 DVD special features.

The Writer Producers is 14-minutes of extra interview material with Wayne Crawford and Andrew Lane. Much similar to the previous it’s the extra material that was created for the 2003 DVD special features.

Rounding out the special features are the music videos for Modern English’s I’ll Melt with You, and The Plimsouls’ A Million Miles Away, and the theatrical trailer.

Valley Girl is one of the true great Teen films of the 1980’s.  This Shout Select edition gives the film the respect it deserves with a beautiful restored 4K Transfer and a vast array of extras.  This is a contender for one of the best titles of 2018.  HIGHEST POSSIBLE RECOMMENDATIONS.