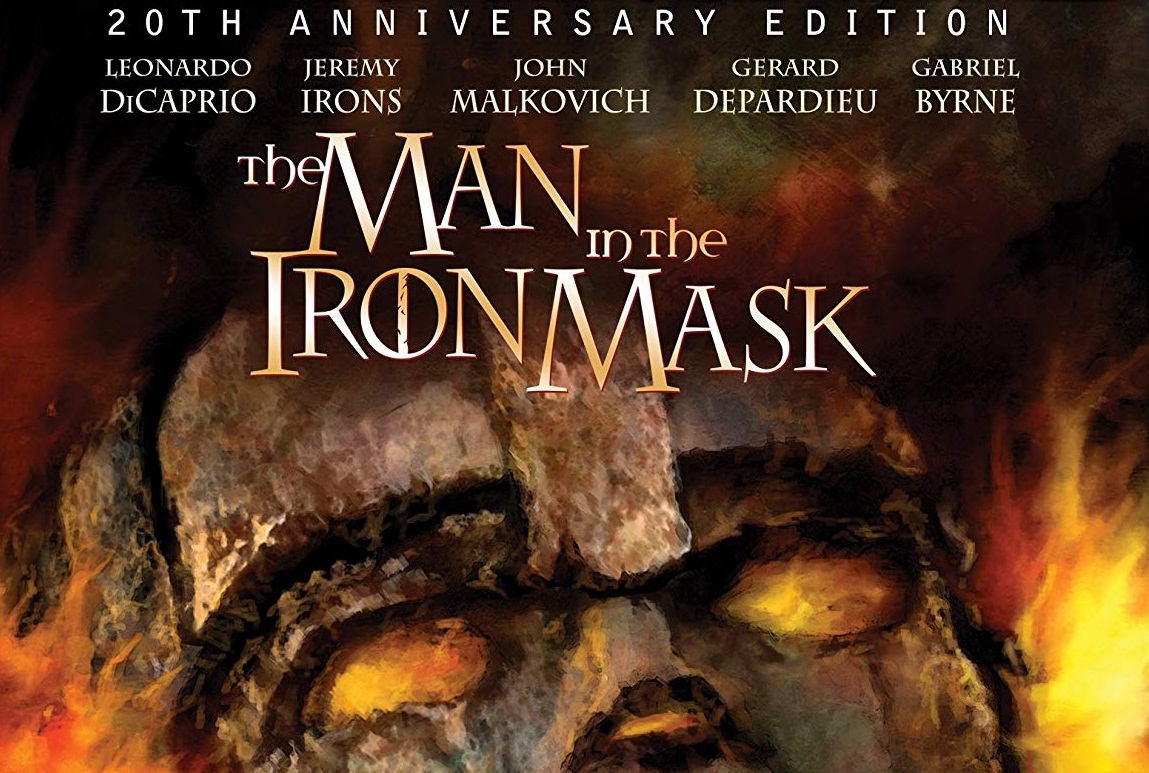 Adam takes a look at The Man in the Iron Mask.  Shout Select is releasing the film in honor of its 20th anniversary in a new edition loaded with special features and a beautiful transfer.

Twenty years have not done any favors for The Man in the Iron Mask.  The Randall Wallace adaptation of the Alexandre Dumas classic and final tale of Athos, Porthos, Amaris, and D’Artagnan.  The film takes the film away from the Four Musketeers and beefs up the Phillip/Louis dual role for Leonardo DiCaprio with various degrees of success.

Set close to twenty years after the events of what people know as The Three Musketeers and The Four Musketeers (in the written form its a lot more complicated than just two stories).  Athos, Porthos, and Aramis have moved on from their duties as Musketeers (aka the King’s bodyguards).  D’Artagnan now the Captain of the Musketeer is guarding not only King Louis (DiCaprio) but guarding his own secrets.  France is in turmoil as Lois, unlike the prior King, has no time for his subjects and only time for his wars.  The citizens of Paris and France writ large are starving.  Protests have begun.  With the death of Athos’ son (Peter Skarsgaard) to allow Louis to bed his fiancee (Judith Godrèche), the Musketeers must come out of retirement for just one more adventure of intrigue and political upheaval.

The adaptation bleeding out the lifeblood of the story, trying to create “serious” adaptation rather than the sort of breezy swashbuckling high adventure we have come to expect from Dumas’ work.  There are moments of life during the course of the film but not enough to make the film anything other than a missed chance at something more.  Tonally the film’s overheated exchanges and arched tone take the film from moments of pure pulp bliss to nothing more than an early 90’s Telenovela.  Most of the incurring incidents happen whenever King Louis appears on the screen.

DiCaprio as King Louis is the primary issue as the performance feels that of a spoiled brat in need of a spanking more than a cunning, calculating, narcissistic sociopath of Dumas’ story.  When attempting to be what Dumas’ had intended the actor comes off as forced and uncomfortable.  It does not help that the actor plays the role with his American West Coast Accent surrounded by English and French accents.  To be fair Peter Sarsgaard also terrible miscast as Athos’ son also uses his American accent to abject failure.  DiCaprio does great in the role of Phillip bringing a youthful earnestness to a character that could have been a one-note Mary Sue.  The biggest problem is more time is spent with Louis than Phillip making the actor’s performance imbalance even more obvious.

The actors that do save this film from being a complete disaster are the Four Musketeers themselves.  Played by a murder’s row of acting talent it seems almost unreal they were able to cast Jeremy Irons, John Malkovich, Gerard Depardieu, and Gabriel Byrne in the same film let alone have them share scenes together.  There’s much to delight in as many of the scenes with the Musketeer’s have them involved in either physically or verbally sparring.  Malkovich has the plum role here as Athos, which benefits greatly by the actor’s skilled menace turned to angry vengeance.  Irons takes a dry run at the Bond Role he never had a chance to be cast in the 80’s (as he should have) with his Aramis. Depardieu brings his Depardeau-ness to Porthos, though approximately 22.4% of the film appears to be his very different looking Body Double.  Byrne as D’Artagnan should have been a great moment for the actor but the film relegates him to a sort of pseudo-villain throughout the film.  Byrne does the best with the material, which should have been Tom Reagan in 17th century France, but can never lift the material beyond its unoriginal origins.

All of this drudgery is forgiven in the last twenty-minutes where the film comes to life albeit for only a fleeting moment becoming the swashbuckling adventure film we want it to be.  One cannot help but get excited as they Four Musketeers reunited after a movie length of tedium to clash their swords together and say the famous “All for one, One for all” credo.  The Man in the Iron Mask gets that right and appropriately gives them that moment of true high spirited adventure.

The new 4K Scan of the Original Camera Negative is stunning.  Shout has done it again with getting premium film assets and turning out great work.  Randall Wallace and cinematographer Peter Suschitzky seem to have intentionally followed David Witkin’s beautiful camerawork on the Richard Lester 70’s adaptation of The Three Musketeers and The Four Musketeers.  There is an ethereal quality here like in those films that had a preference for soft lighting. The transfer manages to take even those candle-lit soft lit moments (there are plenty) and create a sharp image that is still faithful to the way the film was shot.

Commentary by writer/director Randall Wallace is fine albeit a very dry track.  There are plenty of production anecdotes and discussion of the genesis of the project just done very matter-of-factly.  Altogether a decent track.

The Paul Hitchcock interview is an 18-minute discussion with the Producer who was brought in early in the production to replace another Producer. Hitchcock during the interview is honest to a fault.  Discussing very honestly the replaced producer, how they had to fire many of the Heads of Production to smooth everything over.  How Rain and Heat Waves caused delays in addition to the troubled below the line crew changes. It’s a fascinating interview well worth watching.

The Anthony Pratt interview is a 9-minutes extension of Hitchcock’s interview. Pratt discusses how he was hired by the original producer but was left on by Hitchcock because of the work that he had done.  Pratt also discusses the troubles with not only the delays but with the budget.

Myth and the Musketeers is an older 7-minute EPK talking-heads style featurette about the actual source novels, Dumas and the several adaptations.

Director’s Take is a 29-minute featurette ported over from the Special Edition DVD about the making of the film with director Randall Wallace.  Wallace discusses how he adapted the novel and the changes he made to the story. Each of the cast members.  The production issues are very glossed over during the interview but are briefly touched upon.

Original behind the scenes making-of featurette is a 5-minutes EPK that’s more fluffy than informative. Bonus Don LaFontaine does the narration for the featurette.  Don LaFontaine is better known as the trailer guy by most non-Film Nerds.

The prototype gallery is actually Randall Wallace doing a 2-minute micro commentary on video images of the different 3D mockups of the Iron Mask prototypes.

Rounding out the special features is the Theatrical Trailer.

Fans of The Man in the Iron Mask will be elated by this new edition with a beautiful transfer and a wealth of New and Archival special features.