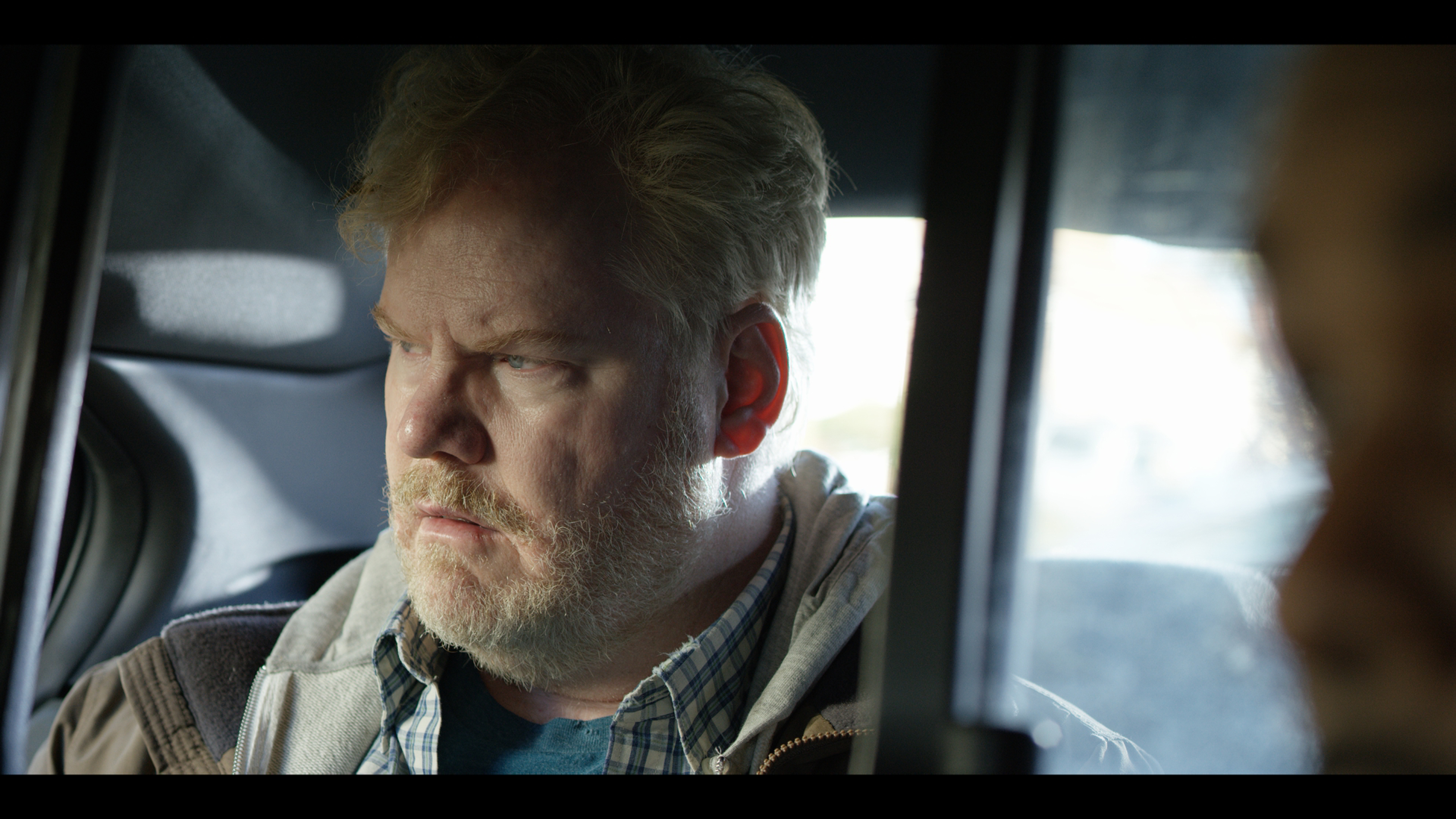 The lone gunman has been a troupe since Fyodor Dostoyevsky wrote Note from the Underground over 150 years ago.  The troupe has been used multiple times to shine a light on the turbulent times.  Taking an unhinged or mentally unstable loner in the midst of a crime has, when done correctly, stripped away at the veneer of society to show its ugly face.  American Dreamer takes aim at White Male Privilege in the current political climate.

Cam (Jim Gaffigan) is working as a HAIL Driver.  He’s behind on his alimony.  He’s behind on his child support.  He’s been, justifiably, fired from his job.  Rather than find a way to be better and get better Cam spends most of his time breaking the law by unexpectedly showing up at his ex-wife’s (Tammy Blanchard) home and driving drug dealer Mazz (Robbie Jones) for an extra few hundred dollars a day.  With pressure mounting, and family members unwilling to give him money, Cam concocts a plan so stupid it’s bound to fail.  The plan fails in horrendous fashion forcing Cam to go deeper and deeper into violence and criminality over one very long night.

Audiences have seen the comedian go into dramatic work.  It’s almost become a career cliche for any Comedic Actor of a certain stature to go into drama work.  Gaffigan manages to avoid the cliches because of just how dark his work is.  As Cam, the actor is allowed to be unapologetically narcissistic in a way that few actors or even films are allowed to portray a lead character.  Part of the beauty of the film and specifically of Gaffigan’s performance is just how ugly the work is.  Cam has no moral compass or compassion for anyone other than himself.  The world owes Cam something, at least he thinks it does, and will do anything to get what’s owed to him.  Gaffigan play this all with the sort of naked contempt for anyone but himself that’s shocking but eventually becomes the film’s secret weapon.

Co-writer/Director Derrick Borte has made a film that’s more akin to Sympathy for Mr. Vengeance than your standard crime thriller.  The film is not concerned with sympathetic characterizations but rather a hint of verisimilitude within the moral gray area that not everyone is bad but not everyone is entirely good.  The script rather than focusing on the genre-specific details unfolds as a taunt character piece following Cam but also his eventual victim in Mazz.  Borte direction focuses on character allowing for the tension to slowly build over the course of the film rather than within specific set pieces.

The script by Borte and Daniel Forte defies your expectations of conventional storytelling of this type of genre exercise.  The script is designed and built towards a specific reveal that changes everything in the script.  Most stories of this type run out of steam after the reveal not understanding the story their telling and where to go.  American Dreamer does not suffer from these types of issues, rather the second half forms an even stronger film that ends at a moment so delightfully bold many will not understand.

The ironically titled American Dreamer may never actually lay judgment on its subjects but the film understands that Cam is a terrible person  One that within his own self-entitlement has no understanding of human life or the value of others.  In these unsure and virulent times to see a film that shows just how insipid white male privilege is without making any sort of obvious apple box statements is the kind of bold and visceral filmmaking we need more of.  American Dreamer is filmmaking for our unsure times.