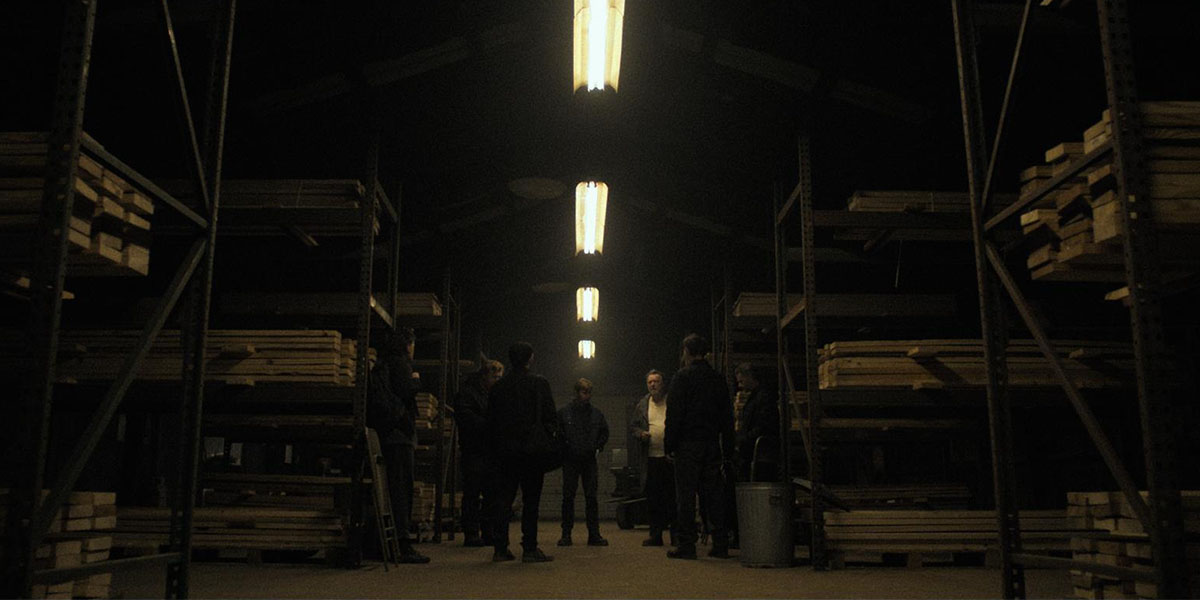 Debut Feature Is a Bleak, Gritty Riff on a Tarantino Classic

A high-profile crime has been committed.  A group of men gather at a warehouse.  There is a traitor in their midst.  As they question one another, they begin to narrow the list of potential suspects.  The film is the feature debut for the writer/director behind the camera.  I’ll give you one guess to name the film.  If you said Quentin Tarantino’s Reservoir Dogs, you would be wrong, but kinda right at the same time.

The Standoff at Sparrow Creek from writer/director Henry Dunham is a variation on the premise of the breakthrough Tarantino film, but the similarities end there.  Standoff is a washed out, gritty noir film that plays like a chamber piece executed by a who’s who of character actors.  It offers none of the visual flair or needle-drop soundtrack moments that its spiritual predecessor boasted, but those kind of pyrotechnics would be out of place in Dunham’s film.

This is not the glamorous world of organized crime, and the dirty deed at the center of the film is not a heist.  The characters in Standoff are militia members.  They are the polar opposite of flashy.  They live on the margins of society and do their best to fly under the radar.  However, despite that fact, one of their members has taken an AR-15 from their makeshift armory and shot up a police officer’s funeral, racking up quite the body count in the process.  And bringing the heat down on all the militias in the area.

As with Reservoir Dogs, there is a cop in the militia’s midst.  However, he is not undercover.  He’s not hiding his law enforcement past.  He’s a disgraced former cop (played by James Badge Dale) who they appoint as their official interrogator.  His mission is to identify the member who stole the missing AR-15, so the militia leadership can decide how to conduct its damage control.  And that’s when the twists and turns in this satisfying crime film begin to unfurl.

Standoff is a testament to the power of tight writing and solid, nuanced acting.  It’s a single location film unless you count the outside of the warehouse as a second setting.  The action is largely verbal.  As the dialogue flies, the characters are fleshed out, and the audience learns their backstories and motivations without any clumsy exposition dumps.  Each spoken sentence furthers the action.  With an 85-minute runtime, Standoff is lean and mean.  The film never feels repetitive, and even a veteran crime film watcher like me never saw the ending coming.

Midnight movies at film festivals can be a mixed bag, so The Standoff at Sparrow Creek was a welcome surprise at the end of a long day of viewing.  It’s all the more impressive given the filmmaker’s relative lack of experience.  Remember the name Henry Dunham.  We should all be looking forward to what he does next.