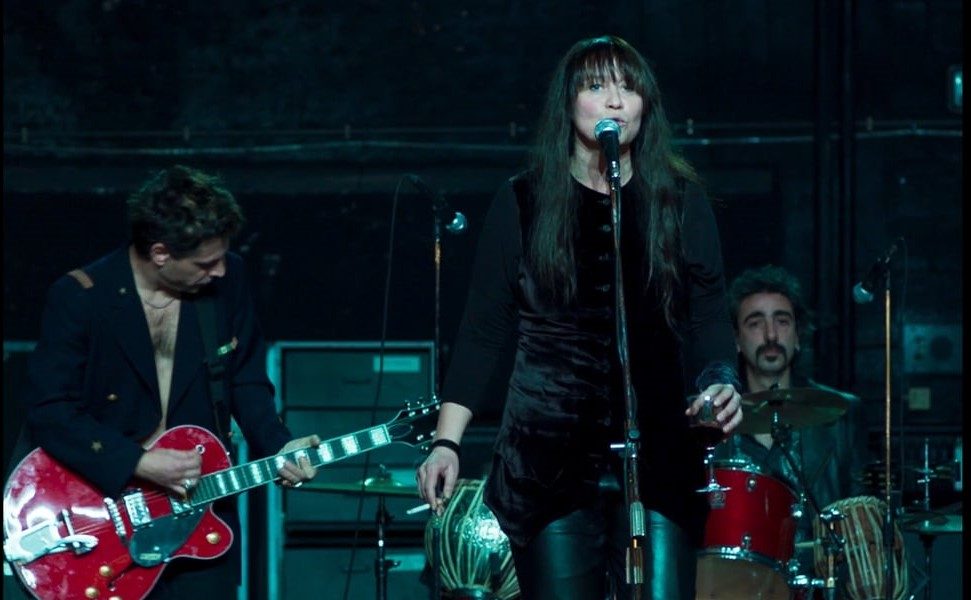 Those must have been some of the best days of your life.  In the opening moments of Nico, 1988, a radio host offers that on-air comment to Christa Paggen a/k/a Nico, the lone female member of the 1960’s band The Velvet Underground.  She appeared on their 1967 album that Rolling Stone called “the most prophetic rock album ever made”.  With a shrug, Nico recalls singing on three songs and “playing tambourine the rest of the time”.  Maybe the greatest days of her life weren’t so great after all.

For the majority of Nico, 1988, we follow Christa’s attempts to keep her career afloat in the music business of the 1980’s that views her as a relic with no real commercial value.  That lady is a piece of history, a local Italian musician comments at one point. But, Nico has no desire to be a well-mannered ambassador for the counterculture of the 60’s. She is struggling to stay relevant, making music that is an acquired taste to say the least. She is prone to diva-like tantrums on stage but lacks the commercial clout that might excuse her outbursts.

Christa’s past and present are intertwined through brief flashbacks detailing her childhood in war-torn Berlin and her drug-fueled days in the New York underground art scene with Andy Warhol and Lou Reed. But, as she tells her long-time manager, at the top and at the bottom, both are still empty.  Throughout the film Christa tries to fill that void with drugs, failed relationships, and a reunion with her mentally ill son that she abandoned as a child.

Trine Dyrholm (star of the Danish television series The Legacy) de-glams for her role as the drug-addicted musician who shoots heroin in bathrooms and vomits on the side of the road. But, it’s her haunted eyes that give Christa her depth.  I wasn’t happy when I was beautiful she tells a friend, and the forlorn look on her face attests to the accuracy of her words.

Writer/director Susanna Nicchiarelli avoids the music biopic cliches. We never see Christa’s days of adoration. Instead, we witness her futile attempts to connect with an audience that no longer understands her. Nico, 1988 is not a rags-to-riches fable or a tale of redemption. It’s grounded in a harsh reality where the relentless drive to succeed ends in nightclubs and gymnasiums filled with indifference.  If it sounds like a bleak journey, it is.  But, it’s one worth taking.