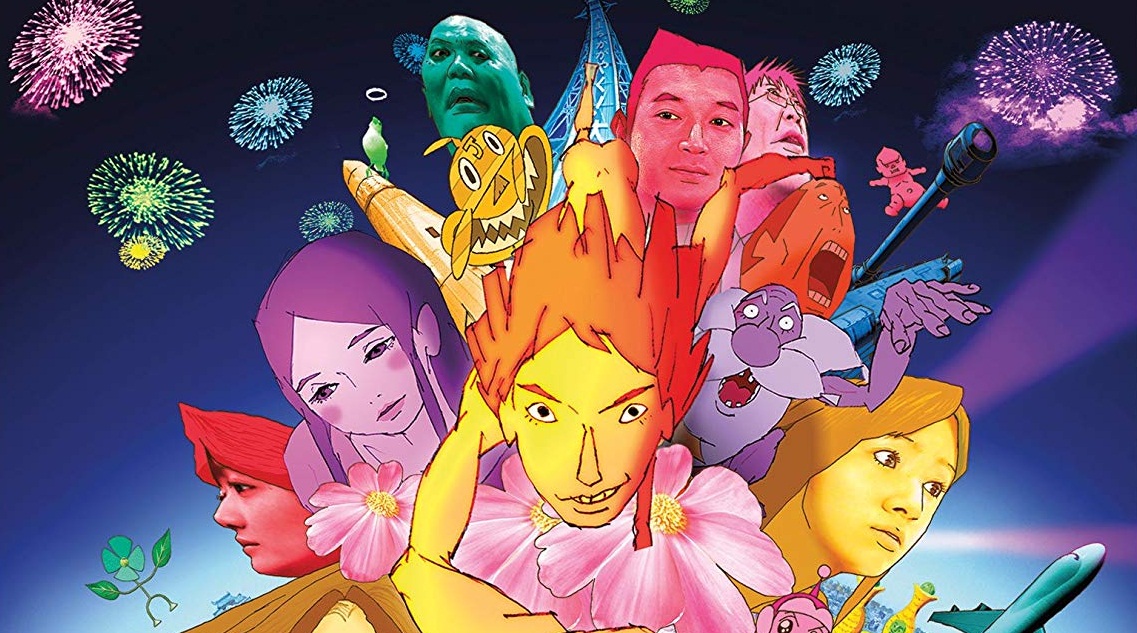 Debut features are tricky to pull off.  Ones with unique voices, even more so.  Ones with unique visual styles, double that.  The trifecta was against Masaaki Yuasa with Mind Game.  For the most part, the film check marks all the perquisites for success but lacks one primary component that Yuasa’s later work would; substance beyond the visual style and quirkiness.

The film tells the runaway from the Mob story of Nishi a childish wannabe comic book artist in his early twenties and his childhood crush Myon.  After a chance run-in that sparks obsessiveness in Nishi, they meet at a restaurant.  It is only there Nishi learns of Myon’s finance, Ryo.  After the murder of a Yakuza Enforcer, Nishi, Myon and her sister Yan go on the run. The trio ends up in the belly of a whale where their new life begins.

The film’s whack-a-mole story is beset by its visual flair.  Yuasa and animation house Studio 4ºC have created a 12 Course meal of surprising visuals and unique set pieces that will delight Anime and Animation fans alike (yes, sometimes the two are not one in the same).  Within the wild left turns that Yuasa has written (based on the Magna by Robin Nishi) there is nothing beyond the trickery.  Much of the film is an empty vessel or filled with toxic clichés.  Much of the film is spent alternating between two modes; leering at Myon and her curvy figure, or Nishi brow beating Myon because she won’t sleep with him or let him touch her or any number of random trigger warnings.

Unlike the recent release Satellite Girl and Milk Cow this film has no sense of an internal moral compass.  It has no sense that any of what Nishi does is unacceptable.  At the moment where he does eventually sleep with Myon, it’s not because he’s evolved and shown her this.  No, it’s because Nishi has worn her down.  Mind Game is a film that sides with its main character’s quest to bed Myon with no sense of what its lead female character wants.  Myon along with Yan her sister are nothing more than body types in the story.  Any attempt to create fully realized female characters are nonexistent.

GKIDS has given a transfer to the film to match the visuals.  In a word it’s gorgeous.  The films lush colors and sometimes extreme hues (the film at times are awash in reds, purples, blues) are perfectly rendered here.  The transfer shows nary a sign of dirt or aging.  The transfer is cleaner than what I normally like with less grain but as this is animation, grain is not necessarily what you want in a transfer.  They do manage to have a razor sharp transfer without any of the issues that come along with DNR’ing a film clean of any sort of digital noise.  Fans of the film will be pleased.

Though Mind Game is an amazing visual feast the lack of any kind of substance beyond the visuals makes it tough for anyone that isn’t a huge fan of Anime. Those fans will be delighted by the presentation.

GKIDS’ Blu-Ray of Mind Game is out now.