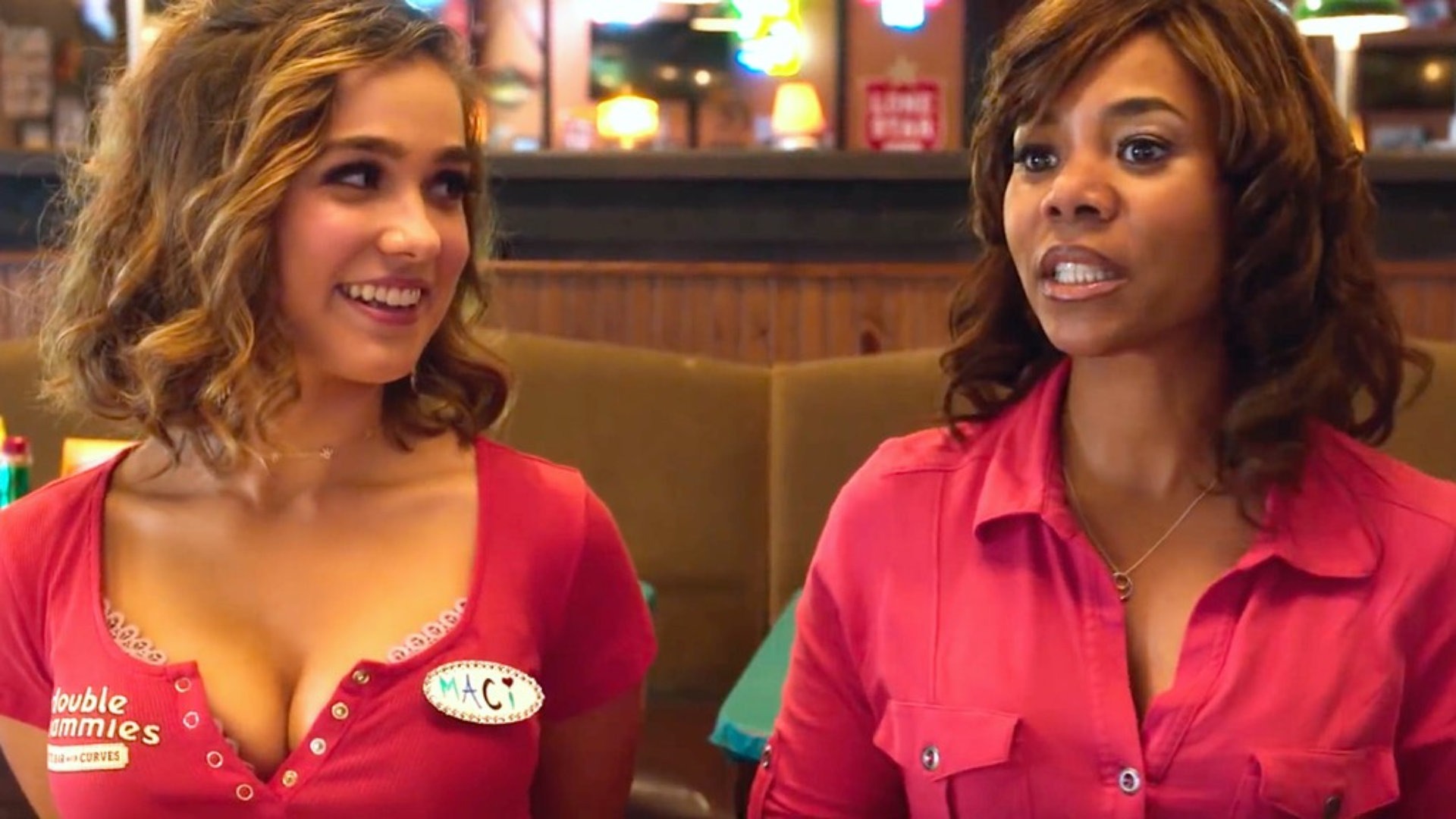 In Support the Girls, Lisa (Regina Hall) manages Double Whammies, a restaurant populated by scantily-clad waitresses who serve food to guys watching the Big Game or the Big Fight. It’s billed as a family restaurant, but it’s hard to imagine the wife who wants to eat a burger and fries while watching women built like swimsuit models bring the drink refills and ketchup bottles.  The restaurant is populated by the usual cast of characters — the party-hearty drinker, the 20-something with the sugar daddy older than her father, the world weary server who knows how to use what Mother Nature gave her, but wants to move on to more respectable employment, and the manager who acts as a mother to her team of “girls”.

The premise and the cast of characters could be fashioned into a wide range of films. It’s tailor-made to be an American Pie-meets-Porky’s raunch comedy where some bodily fluid or other gets accidentally served up in the Special of the Day. Or it could be sounding board for a thematic subtext about women who are forced to use their bodies to make ends meet in a way that’s surprisingly socially acceptable. Unfortunately, Support the Girls is a meandering mess that never seems to find its true identity.  It’s either a comedy that isn’t very funny or a drama that isn’t very … uh … dramatic.

In a #MeToo world, Support the Girls is oddly tone deaf. With cleavage heaving and cheeks falling out of short shorts, the waitresses stage a car wash to help with a co-worker’s legal bills. The only moral question raised by anyone is the owner’s contention that the proceeds should go to the restaurant and not the individual server. Yet later in the film when a waitress has a little too much flesh fall out of her top, the patrons are outraged and pandemonium ensues? The double standard is never explored or explained. Half-naked car wash? Good. Nip-slip? Bad.

The film is an exercise in adequacy. It’s the kind of movie that charitable film-goers would describe as “fine”, a harmless, forgettable ninety minutes. But in a world filled with so much content, it’s hard to give Support the Girls any kind of a free pass. The characters are bland. The plot is predictable. And the themes are inconsistent.

If you want to make a slapstick comedy, feel free to throw the rule book out the window. Offend all genders and races equally, and you’re on safe ground. But, we live in enlightened times where subjects like female empowerment and sexual harassment demand to be responsibly portrayed. Support the Girls doesn’t offend with its depiction of its subject matter. It commits a greater sin: it never acknowledges that these are issues at all.