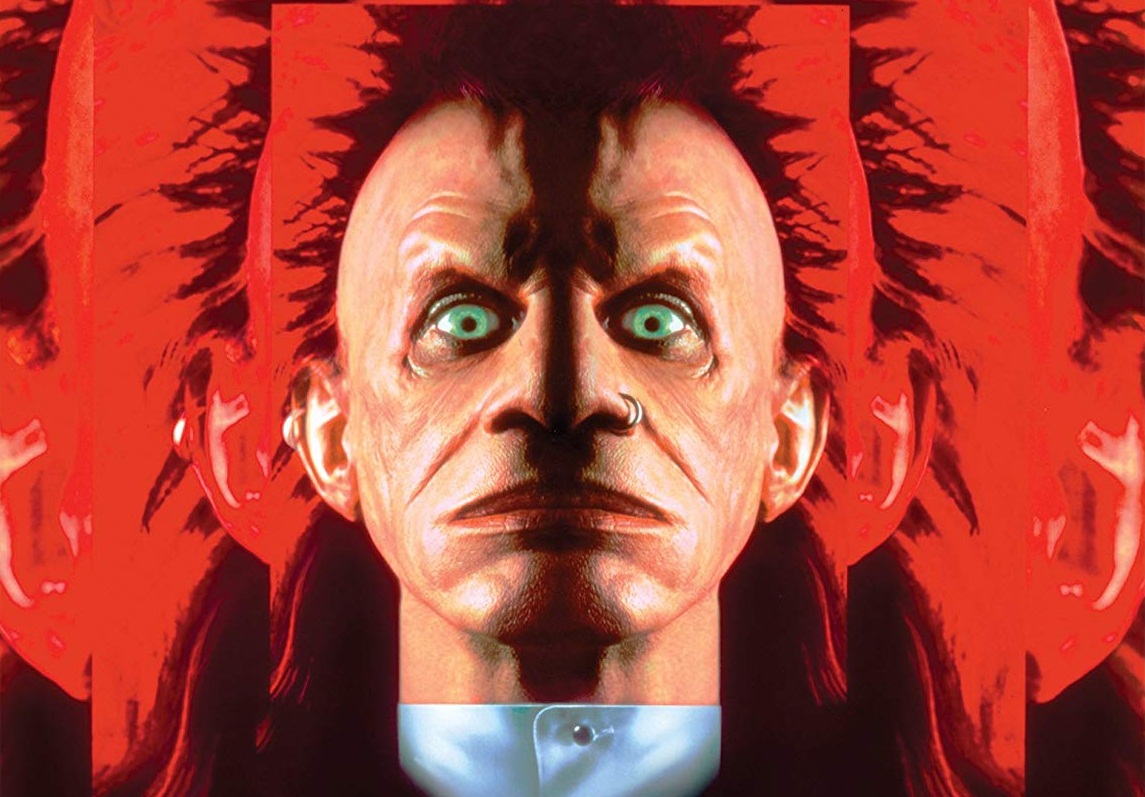 Adam connects his 56K Modem and CD-ROM Drive up for an awesome twisted game of Brainscan.  The film is being released by Scream Factory in a new Blu-Ray loaded with Special Features.

Wow, did this one surprise me.  Far too often I will sleep on a horror film because of my first impression. I slept on John Flynn’s Brainscan. A huge mistake on my part and anyone else in the mid-90’s who made that decision after they saw the original trailer that did more to deter than to bring audiences in.

The setup is simple.  A rich anti-social gamer is there any other kind, named Michael (Edward Furlong) is told about Brainscan the newest Next Gen Gaming Experience.  By chance and luck, Michael is able to get a BETA of the game.  Before he has a chance to hit the reset button on his system the Trickster (T. Ryder Smith) has appeared to not only Gaslight Michael’s ass but to ensure he finishes the game.  But what is the object of Brainscan?  Serial killing and ensuring you get away with it.

Part of the fun of the entire enterprise is watching Michael’s increasing homicidal tendencies.  Flynn and screenwriter Andrew Kevin Walker create a film that manages to twist and turn in the best and most unexpected of ways.  Brainscan is about the game itself but the consequences of the game itself.  Flynn and Walker have no qualms taking the film to darker territories but never tasteless (re rape).  The film creates a morbid sense of gallows’ humor in the form of Trickster.  Though the filmmakers are adroitly aware though humorous, they never undercut how dangerous a foe he is.

The Effects and Design work, minus the very dated CGI, are as impressive as the Mid-90’s offer.  The Trickster design wise is perfectly realized.  It does make one wonder why they never made this into a full-fledged horror series.  The work is that good and the character himself is indelibly fun and frightening.

Brainscan is better and smarter than one would expect.  Flynn’s crisp direction and a cracklingly good script by Walker elevate this movie.  What could have been another dreary entry into the Computer/Internet Horror subgenre is actually a fun smarter than you expect dark ride.

Scream Factory has taken its time in putting together this transfer. The image is clean of any artifacts and the black levels (for a film shot primarily at night or in darkness) are great.  The sharp new 2K transfer does help make this shot-on 35mm feature look beautiful. Kudos Scream Factory.

The commentary is by Tara Flynn who was a PA on-set and also Director Flynn’s daughter.

A Virtual Debut – is a 14-minute interview with screenwriter Andrew Kevin Walker.  It’s a great time and one of the best features as Walker definitely has affection for his feature screenwriting debut.  He even manages to reference Looking For Mr. Goodbar and is a self-professed VHS collector.

Talking with Trickster – is a 14-minute interview with T Ryder Smith aka The Trickster. Smith is a lively interview as the former Shakespearean actor discussed how he got the part and the production itself.  The interview is littered with B-roll footage and BTS photos including a hilarious moment between Furlong, who just got his license during the production and Smith in full makeup.

Merging Realities – is a 19-minute featurette documentary about the Effects work it took to make Brainscan. They interview every department head within this thorough featurette including Steve Johnson make up effect creator. Andy Schoneberg trickster application, and Mike Smithson “mesh” designer and sculptor.  Between the three men, great tidbits are revealed like Keith Richards and Jack Nicholson’s hairline inspired the Trickster.  Some very inventive makeup work was done to give the Trickster his unique look that was inspired by Lon Cheney. They even discuss a great deleted designed monster that was essentially the makeup non-CGI version of the mutated Trickster at the end. They also go into detail about work permits and the crazy Montreal Police interrogation that Steve Johnson and Andy Shoneberg. Which is better left to the guys tell it.

Musical Virtuosity – is an 11-minute interview with composer George S. Clinton.  The interview discusses his career beginnings with bands and getting his chance to compose a Cheech and Chong’s film. The interview though discussing the project is much more of a technical interview those people interested in film scores.

The Deleted scene was the aforementioned Mutated non-CGI version of the Trickster played out in full.

The Behind the Scenes footage is a few minutes B-Roll production footage. Scream Factory has to be commended for being diligent with putting this great raw footage on their discs.  For those that love to see more fly-on-the-wall style featurette, this is definitely a great addition to the disc.

Rounding out the special features are a host of vintage Trailers, TV spots and a Still Gallery.

Brainscan is an unexpected good horror film.  Scream Factory has done right by it with a brand new transfer and a host of great extras.  Recommended!

Scream Factory’s Blu-Ray of Brainscan is out August 28th