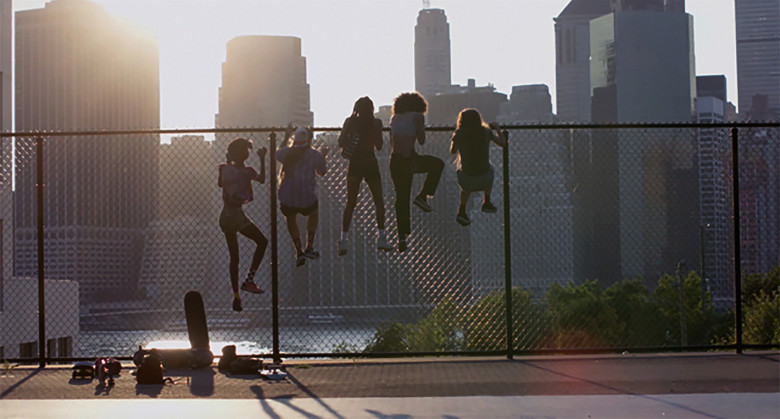 In a day and age where each genre (and subgenre) of film must push boundaries and preconceived notions to be considered by an audience, Crystal Moselle’s debut narrative feature, Skate Kitchen, pulls out most of the stops with its edginess and authenticity … and it pays off.   If you are expecting your mom and dad’s Coming of Age film, or anything John Hughes had his finger on in the 1980s, I am afraid that you are at the wrong screening.

Rachelle Vinberg stars as the reserved, but curious, Camille, a teenager balancing her inner child and outer adult once she joins the Skate Kitchen crew – a unit of all female skateboarders in New York City.  The colorful and blunt group inspire Camille as she begins to discover herself and her position in the ever-changing world around her. While emotional pain, physical pain, and tension within her relationships (as well as herself) slow her down, the conclusion of the film is anything but a screeching halt.

What stands out most about Moselle’s work, other than the aesthetics, locations, and score, is how she devotes her full attention, care, respect, and eventual understanding to her subjects. Due to her almost journalistic pursuit of her thematic content, the characters in Skate Kitchen are admired for their victories and their defeats, because they are as close to authentic as humanly possible, without being found in the frames of a documentary. They are aware of their desires, their bodies, what and who they hate, and most importantly, their feelings and point of view of the world around them (even if they have a hard time expressing them). Each time the crew holds ‘council’, whether it is while smoking weed in Janay’s room, or during a mass make-out session at a get together with the other crews, we have a front row seat to their individual and communal expression.

In a world that still tends to see things in black-and-white when it comes to gender norms, Moselle challenges those norms with the ease of an older sister and the care and firmness of a mother. By using the very women who inspired her ‘fictional’ characters, the film shines with empowerment. So much so that one of the stars of the cast, Jaden Smith, becomes a second thought by comparison. They are currently living the lives of this fictional/non-fictional crew, as women and as members of an androgynous generation. Their insight is vital to the new age of the subgenre that for the longest time inspired kids to be like Molly Ringwald or Emilio Estevez.

This is not to say that Moselle’s feature is completely groundbreaking.  It still contains certain Coming of Age tropes. From the use of montages, to the joy of being free from adults, to the eventual tension that causes the crew to part ways (and eventually coming back together), the structure can be rather predictable at times. Additionally, the moments when the dialogue and situations attempt to be edgier in hopes of keeping modern audiences intrigued do not always pay off. One believes because of these ‘bumper guards’ that the writers put in place for their first narrative feature to ensure a formulaic success that critics might have felt indifferent or unimpressed by the film.

In spite of these concerns, the film is quite an experience, even if it appeals to one generation over another. It is clear with films like Moselle’s we are entering a new age of youthful self-discovery on the silver screen, and its inclusiveness to all is to be applauded.