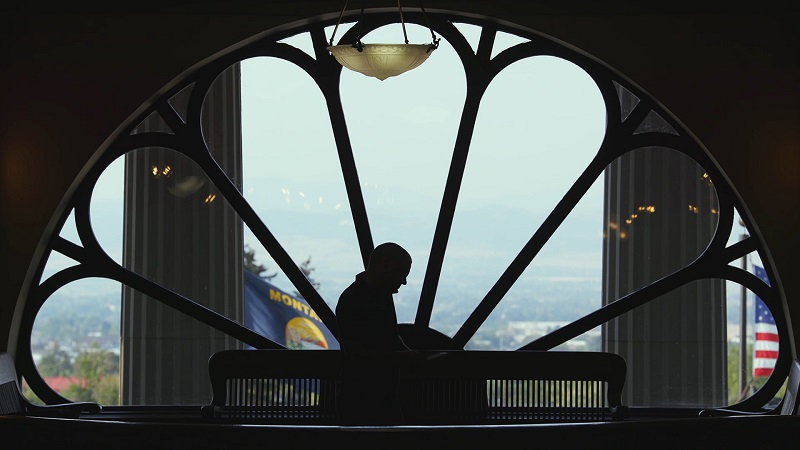 Muckraking journalism is an American institution. From the days of Boss Tweed’s Tammany Hall to Woodward and Bernstein bringing down a president by exposing the Watergate scandal, the Fourth Estate has bulldogged American politicians and institutions for decades.  Muckrakers are still alive and well in our social media, journalism-with-an-agenda age, but is anyone still listening?  When scandals are exposed, when corruption is documented beyond a shadow of any doubt, does anyone care anymore? Or is it simply a righteous cry in the dark?

Dark Money, the new documentary from writer/director Kimberly Reed, is good old-fashioned “boots on the ground” journalism that exposes the legal ways that corporations and mega-donors find to influence elections and buy the loyalty of American politicians.  The film provides an in-depth look at the formation of Political Action Committees (PACs), and the ways these anonymous, impenetrable organizations funnel unlimited amounts of money into political campaigns.  It’s legalized bribery on a national scale that arguably renders the individual citizen irrelevant as a source of political change in the United States.

Dark Money takes a subject that many of us think we understand and shows us we have barely scratched the surface of comprehension. The filmmaker interviews members of election oversight organizations and candidates who were on the receiving end of shady campaign advertising funded by nameless, faceless donors.  The resulting portrait of the American political system is one of a few wealthy oligarchs pulling the strings on dozens of political candidates to fleece American resources and institutions for the own personal gain.

The film focuses on the state of Montana because it is the perfect crucible for tampering with local elections through untraceable campaign contributions.  The population of Montana is small, relative to its large share of our nation’s natural resources.  Some well-targeted contributions in certain local elections can theoretically put control of vast natural resources in the hands of the PAC-backed candidates.

And it’s all perfectly legal.  In fact, it was endorsed by the U.S. Supreme Court in the Citizens United decision, when the Court determined that corporations are “people” with a First Amendment right to make political contributions to the candidates of their choice. So, the last refuge of American democracy is outrage, the hope that the public will become so upset that corporations are interfering with our political process, that citizens will vote against the candidates receiving these monetary shots in the arm.

Dark Money adeptly illustrates that an ignorant populace is needed for this form of corruption to succeed.  If we don’t understand the implications of corporate donations and the resulting election manipulation, then we won’t try to prevent it.  The film blows the whistle on these corrupt practices, but in the chaotic white-noise world we live in, will anyone notice? As American citizens, Dark Money should be required viewing.