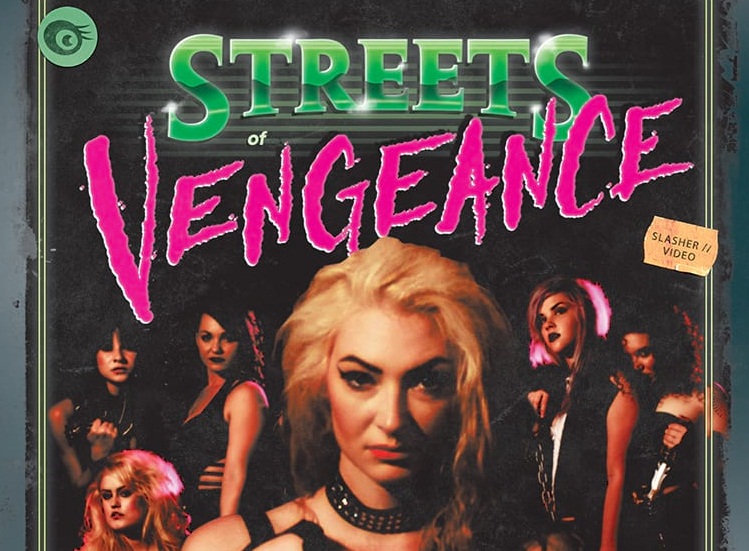 Adam ponders if it’s worthy of the films the gritty 80’s throwback Streets of Vengeance it references or if that particular genre is worthy itself.  Released by Olive Films/Slasher Video in a loaded special edition.

Streets of Vengeance definitely has its heart in the right place.  Writer/Director team Paul Ragsdale and Angelica De Alba understand the rape-revenge films of the 1980’s.  They know the specificity of the genre and the videotape aesthetics of the era.  The results are solid albeit clunky in a way that does not seem intentional.

One hoping for the type of film that Sybil Danning made during the late-80’s will be disappointed.  The faux bad acting and at times jarring editing is here but it’s all for naught.  Which isn’t a bad thing, the biggest issue are those kitschy style moments like Stacy Monroe and the faux bad acting.  Because of the more modern sensibilities in the film that Ragsdale and De Alba are making one wishes, they would have dropped the aesthetics for something more modern akin to Nicolas Winding Refn, where modern sensibilities and aesthetics mash up with 80’s style conventions so brilliantly.

That is what makes Streets of Vengeance so interesting and sometimes frustrating.  The filmmakers make some very pointed statements about what recently has transpired with Gamergate, Me Too and Toxic Masculinity in general.  The anger that courses through Mila’s veins as she gets her vengeance on the men that wronged her is palpable.  Delawna McKinney definitely has the look and the feel of an 80’s starlet ala Sybil Danning or even Linda Blair from Savage Streets (which this film was heavily influenced by).  One wishes that Ragsdale and De Alba would not have been so in love with the concept of making Grindhouse but updated for the 1980’s because what they have minus that is something strong and worth at least a chance for any low-budget genre fan.

The film is beautifully transferred to Blu-Ray (which was one of the problems for a film that wants to be a throwback to direct to VHS action films).  The transfer is razor sharp with its black levels perfectly balances (the film mostly takes place at night).  The only complaint is that aesthetically one would have hoped Olive would have leaned into Ragsdale and De Alba’s style and given a more “gritty” transfer to try to reproduce the 16mm to VHS with a lot of video noise style everyone (of a certain age) knew.

Olive Films has gone all out for this one with a stacked edition.

The best feature on the disc is what is dubbed a “featurette” making of. This isn’t a featurette but an outright feature length (running 78 minutes) making-of documentary on the making of Streets of Vengeance.  The making-of is as interesting as the film itself, taking you from the origins to the IndieGogo campaign to filming to the release of the film.  There is no real stone left unturned.  Anyone planning on going into the world of low budget filmmaking would do themselves some good at watching this doc as it really does give a real-life ground floor look at what it takes to make an ultra-low budget film.

The Cast and Crew interviews seem to be extended interviews from the Making-Of.

Outtakes and Bloopers are what you would expect.  The Outtakes really don’t bring anything to the film and you can definitely see why they were lifted.  The bloopers are mostly people breaking mid-line in a scene.

The trailers are the goldmine here.  Ragsdale and De Alba make some great fun trailers and have multiple different versions of the Streets of Vengeance trailer.  I suggest the VHS one. It’s the best.  Also included is the IndieGogo video that got them some of their financings.

The faux-trailers for both Slashorette Party and Tough Guys are hilarious and fun.  They definitely know how to put together a fun trailer that evokes a specific era.

Music Videos and Photo Galleries round out the special features.

Streets of Vengeance’s update of the 80’s woman’s revenge film comes up with mixed results but the feature-laden disc is a RECOMMEND for any burgeoning low-budget filmmaker.