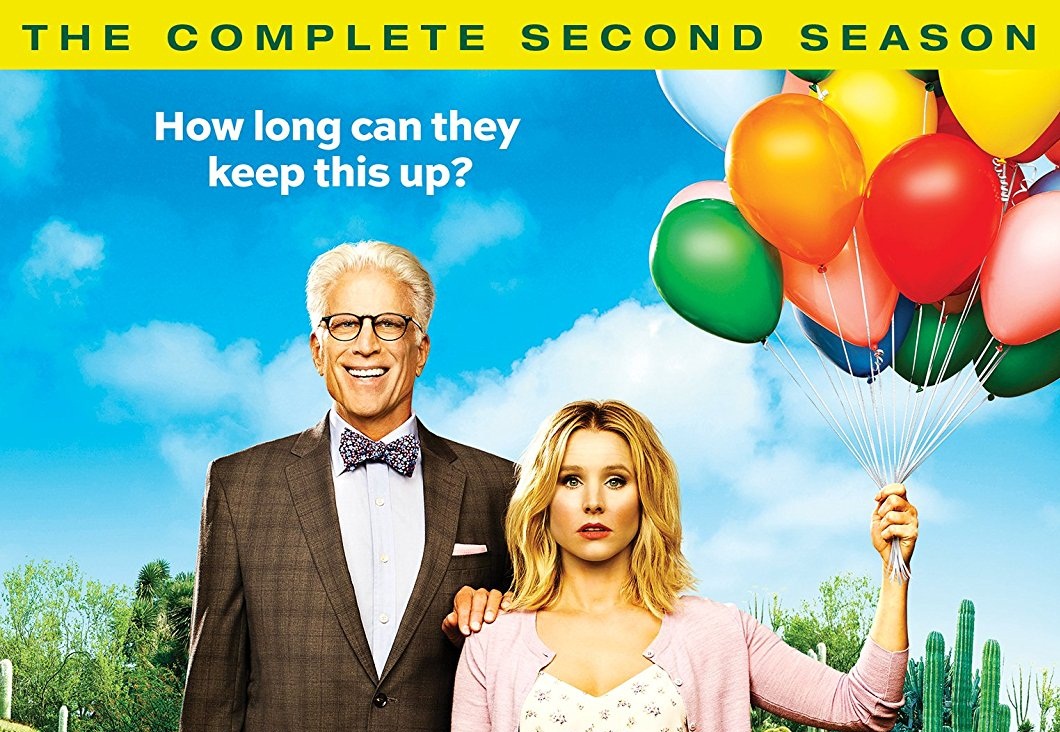 The Good Place Season 2 is so FORKING GOOD!!!  Adam’s love of The Good Place in its second season continues unabated.  Extra love for the DVD release from Shout Factory.

EDITOR’S NOTE: Please do not read this review if you have not watched the first season of The Good Place as this does contain Spoilers for that Season.

Many shows only push themselves once or twice a season.  One can set these pushes or twists like clockwork during the mid-season break and the Season finale.  The Michael Schur created show, The Good Place manages to push itself continually forward into new areas and storytelling arenas.  Schur and the writing staff have managed over the thirteen episodes this season and last to push beyond conventional TV narratives.  The Good Place finds its home in comfortably and confidently pushing the story forward beyond conventional episodic Comedic TV series.

Statius is the bread and butter of any comedy series.  The hardest work to do for any show but especially a comedic one is pushing into new territory of any kind.  Watch any standard popular comedy series and you will notice a pattern of the characters never changing or evolving.  You will see the same storylines pushed again and again.  The Good Place takes those dictums and shatters them with a sledgehammer.  Schur and Company have dared to be better at storytelling than any show on TV currently.  This is not because of the continual shifting of and pushing the storytelling into new avenues.  Anyone could do that.  Its how The Good Place does this and with style, humanity, emotion, and wit, that makes it special.  Landing a high concept comedy is hard enough but to imbue it with those attributes and have it evolve in a way that feels more like the best of cinema rather than the worst of Television is a feat that’s nothing short of miraculous.

The end of the first season of the High Concept Comedy found Eleanor (Kristen Bell), Chidi (William Jackson Harper), Tahini (Jameela Jamil), and Jason (Manny Jacinto) in league with Michael (Ted Danson).  Their purpose, to get out of the Bad Place and get to the real Good Place, with Michael in tow.  Building upon the mythos, characters, and storylines set up in the first season, the second season has the confidence of a great movie sequel.  The Good Place Season 2 is everything that you have come to love about the show but done better (if that is possible).

The ability to throw a twist and play with that twist which seemed like a gimmick in the first season is its greatest strength in season two.  Unexpected moments turn into meaningful story beats and ability to explore characters more fully.  Janet (D’Arcy Carden) feelings and malfunctioning after finding out about Jason’s secret relationship with Tahini.  Michael aligning himself with the subject of his supposed eternal torture has consequences.  The demons that Michael is in charge of that are to help with the eternal torture find out about his plans to escape with Eleanor and the group.  How these storylines play out is a large part of the second season’s story arc. Characters that were support roles like Vicky (Tiya Sircar) take the main stage with great comedic effect.

Yes, Eleanor and Chidi’s romance is not just explored but evolves both of them as characters.  Seeing Bell and Harper interact and continually change as characters are one of the delights of the show.  Eleanor and Chidi are unlike any other great TV couple.  Their relationship isn’t based on the sexual tension built on constantly bickering.  In fact, the relationship is built on communication, teamwork, and friendship.  They manage to be one of the great couples because they don’t bicker constantly and because their relationship is built on health attributes… but still, manage to be hilarious.

Part of what makes the season so special is Schur’s continual evolution of the characters. Everyone evolves and changes over the season.  Even characters that appear to be on the surface one note, Jason and Janet  evolve from where they once were being more than their one-note character type could have been.  Many will expect this from Schur who’s co-created both Parks and Recreation, and Brooklyn Nine-Nine.  The Good Place goes beyond even those shows with its character development.  In the best way possible the show feels like 4 hours and 45-minute movie.

The transfers on these DVDs are well reproduced from the Broadcast and Streaming versions.  One does wish or has hope that the show will eventually be released in a hi-def format as the visual style and production design for the show begs for the upped resolution.

The commentary is only on the one episode rather than multiple form last Seasons disc but the single commentary is actually quite good as Michael Schur, Ted Danson and others discuss everything that went into making the second season.  It is spoiler filled please be warned to NOT watch this before watching the entire season because they do in fact give away a lot of the plot points in the season.

The Extended Episodes are the find here.  There are EC’s for TEN EPISODES!!! Episodes 3 – 13 all have the option to play their Network Version or the Extended version or both if you prefer.

The Good Place in its second season proves that it’s not just the best new TV Series on but it’s the best TV series on period.  End of Discussion.  Highly Recommended!!!

The Good Place: The Complete Second Season DVD is out July 17th from Shout Factory