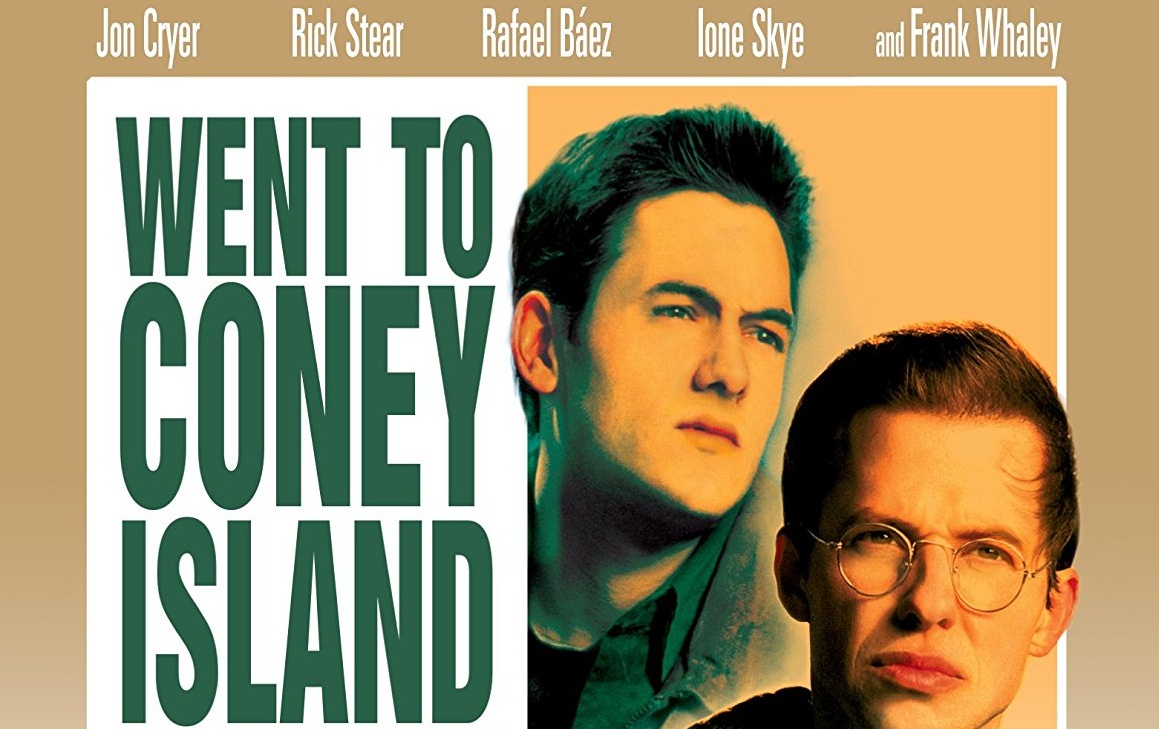 Adam is delighted and surprised to discover Went to Coney Island on a Mission from God… Be Back By Five.  The late 90’s Indie Film is newest Blu-Ray entry to the great emerging Boutique Label MVD’s Rewind Collection.

If MVD’s Rewind Collection will eventually be filled with forgotten gems such as this film, we are in for a great late-era boutique label.  The film by Richard Schenkman was a “Blockbuster Video exclusive” that went into obscurity (like many that were labeled as such).  Went to Coney Island on a Mission from God… Be Back By Five is as pleasant a discovery as I’ve found since the days of my The B-Movie Isle column at Film Dispenser.

Went to Coney Island… concerns two best friends Daniel (Jon Cryer) and Stan (Rick Stear) on an Oydesus-type search for a third friend Richie (Rafael Báez) whom they lost touch with years ago.  Much of what happens is prototypical of this sort of entry.  But it’s the script by Cryer and Schenkman that raises the film above the clichés of the subgenre.  Rather than tell a linear story, they’ve opted for an elliptical structure.  This sort of stylistic choice works in favor rather than against the film.  The story devices and structure make it feel less like a Scorsese style New York Borough story and something more akin to Nicolas Roeg.

Much of the film rest on the performer’s shoulders, all of which turn in heartfelt performances.  Cryer and Stear are excellent as the lifelong friends on this strange journey.  Both actors are able to bring a lived-in quality to their chemistry.  Making you believe they are the type of friends, though very different and very co-dependent still remain the closest of friends.  Cryer especially good, turning in a quiet and soulful performance as Daniel.  Stear has the showier role as Stan, allowing him to play up how screwed up the gambling alcoholic is.  It’s Cryer who anchors the film with a character we rarely see; the blue collar guy trying to make his way with what’s been put in front of him.

The supporting work done by such 90’s indie stalwarts like Frank Whale, Ione Sky, Peter Gerety, Dominic Chianese, and Judy Reyes is low-key in the best way possible.  Each with no more than two scenes come in and bring an extra dimensionality and life to the proceedings.  It should be also noted they do perfectly subtle work never reverting “look-at-me-look-at-me” histrionics.  Which is a huge problem with these types of indie films of the time.

Went to Coney Island on a Mission from God… Be Back By Five is a great intimate dramedy that is worthy of discovery.  Schenkman and Cryer’s script deftly navigates what would have been a cliché ridden indies of the era.  Take a chance on this surprising and engaging film.

The new High Definition Blu-ray presentation from a frame-by-frame digital restoration from original 35mm film elements is beautiful.  MVD’s transfer luminous siding on the more 35mm Archival print look than a cleansed of any grain DNR’ed to death transfer.  The same sort of character that inhabits the film inhabits this transfer.  Bravo to MDV for taking the time to have a digital restoration done.

The film begins with a nice 3-minute intro by Cryer (who co-wrote and starred) and Schenkman about how the film came to be.  They are justifiably proud of the work done in the film.

The Audio Commentary by Schenkman and Cryer falls on the more conversational side of Commentary tracks.  There are quite a few juicy production stories but those expecting a detailed “nuts and bolts” style commentary should look elsewhere.  It is well worth your time especially if you end up loving the film.

Went to Coney Island… To Make a Movie is an 18-minute behind-the-scenes featurette that features vintage footage mixed with footage shot recently detailing the production of the film.  It’s a great featurette that feels like an honest ground-level look at making an indie film in New York City in the late 90’s. Something that is quite different than it is almost two decades later.

The Producer is a 3-minute short directed by Schnekman that takes the clichés of the Shark in a Suit as a producer to a very funny end.

Photo Gallery and the Theatrical trailer round out the features on the disc.

Bravo to MVD and their Rewind Collection label.  Went to Coney Island on a Mission from God… Be Back By Five is the type of forgotten Indie Gem that you hope these types of Labels would promote.  The Blu-Ray is loaded with features, a great transfer, and a solid commentary in service of a truly good film that deserves to be rediscovered.  Recommended.

0 comments on “Blu-Ray Review: MVD Rewind Collection’s Went to Coney Island on a Mission from God… Be Back By Five (Collector’s Edition)”