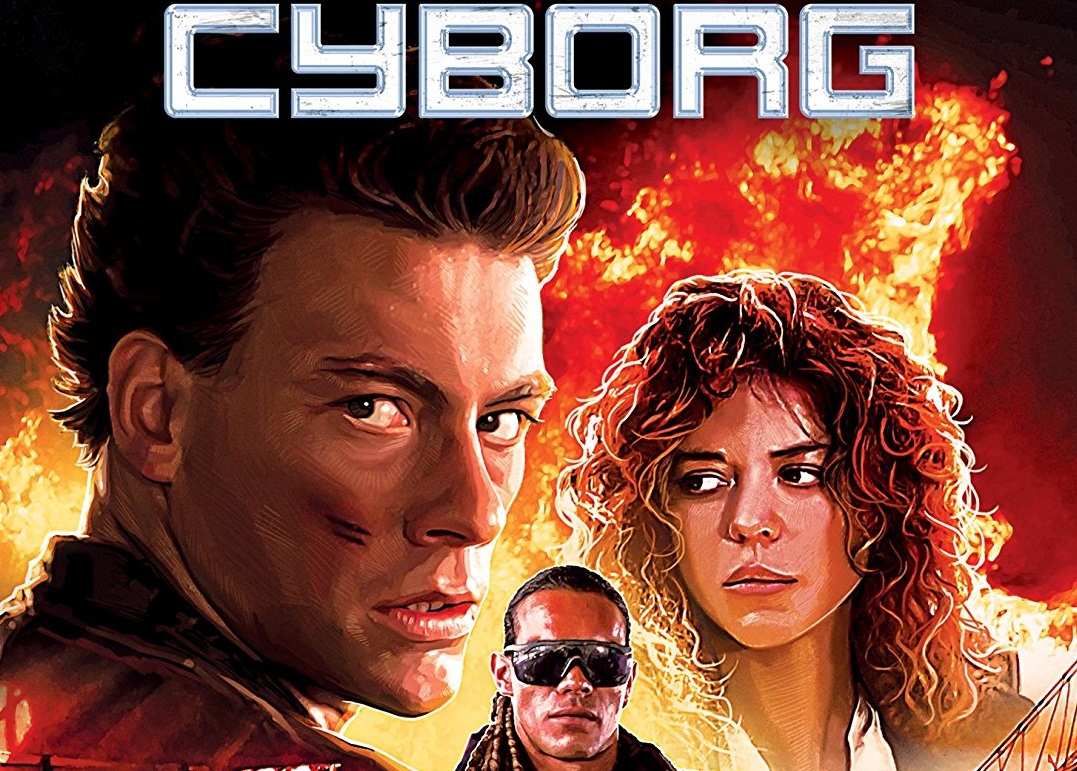 Adam heads to the past to go to the future with Jean-Claude Van Damme in Cyborg, on Blu-Ray from the mad geniuses at Scream Factory.

Some films just catch you at the right time in your life.  No matter the critique or a mass stampede of bullshit people throw at it, you can’t help but like it.  Albert Pyun’s Cyborg is one of those very films.  Yes, I understand many find this film all manner of descriptions of awful.  It matters zero.  The film regardless of its faults, maybe because of them, is a personal favorite, and still highly entertaining B-Movie Post-Apocalyptic Martial Arts film.

Set in a post-apocalyptic world, humanity’s last hope against the virus that continues to kill the remain humans; a cyborg and Jean-Claude Van Damme!  Yes, JCVD is not the Cyborg or Cyborg rather the Mad Max (minus both the “Mad” and the “Max”) of the piece.  As Gibson, Van Damme is pushed into helping the Cyborg (Dayle Haddon) get to her final destination; the DCD in Atlanta.  I’m sure that Frank Darabont was a fan of this film because the film is basically the same premise of Season 1 of The Walking Dead.  I am also sure that Van Damme and Pyun were both fans of 2019: After the Fall of New York as Cyborg is a huge riff on that film.

Gibson and Cyborg lady traverse the wastelands, and rundown shanty towns to get to the CDC.  Their main antagonists are a group of hair metal band rejects led by WARCHILD! No, I’m sorry, wrong movie, but the right actor.  The metal bad rejects are lead by Fender (Vince Klyn).  There is a history between Fender and Gibson (not just the guitars but the characters).  The history is dolled out through the first part of the film as flashbacks.  Crucifixions, knife boots, triple-take kicks, abandoned factories all factor into the film building to the ultimate showdown between good and evil.

For the budget, time, unruly star, and equally unruly producers, Albert Pyun creates a fun albeit goofy actioner.  There is a linearity and pragmatic way that things unfold that works in spite of the aforementioned goofiness.  If the films ridiculous backstory for Gibson had been further kept at bay or approached differently the film’s narrative would have been less, schmaltzy.  In its current form (Van Damme, by Pyun’s own admission, cut the film himself, with the permission of Cannon Films) works at delivering maximum entertainment even though some of it is deafening bad.  The earnestness of the flashback sequences only helps to further reinforce they are glaringly misplaced.

Cyborg looks beautiful, said no one until this Blu-Ray release.  But it’s the truth.  Believe it.  Scream Factory has gone above and beyond with ensuring this new 4K Scan From The Original Film Elements is the best the film has ever looked, even during its original theatrical release.  Black levels, Contrast, Color reproduction is almost flawless.

This release could have easily been a Shout Select which the amount of care, time and resources that Scream Factory has placed into giving us a great edition of Cyborg.  Filled to the brim with new special features that amount to well over four hours of content (that’s with the commentary) to keep even the most diehard of Cyborg fans satisfied.

The commentary by Albert Pyun is a wonderful listen to any fan of Cyborg with great tidbits about how Pyun’s sequel to Masters of the Universe and his take on Spider-Man imploded and became Cyborg. Never once is Pyun condescending towards his film though he does make some well-thought observations about what was wrong and how it went wrong.  Fans will not be disappointed.

A Ravaged Future – The Making Of CYBORG is an almost hour-long behind-the-scenes making-of documentary including everyone and anyone associated with the making of Cyborg.  The biggest exception of course is JCVD himself does not show up.  This documentary barring that one minor critique is everything that you’d want from any BTS doc, let alone one that’s about an often-criticized B-Movie action film.  The detail they go into is entertaining as the film itself.

Shoestring Fantasy – The Effects Of CYBORG is a twenty-minute look at how Fantasy II Film the Special FX company ran by Gene Warren got involved and produced the effects for Cyborg.  Again here the featurette could just be another fly by night featurette with nothing really of substance but Warren and his crew discuss in detail how seriously they took the job and instead of lowering the quality discussed the practical approach to a limited budget and offering solutions to the low budget production.

Extended Interviews from Electric Boogaloo are just that.  60 minutes of Pyun and Lettich discussion various topics but specifically Cyborg, JCVD, Cannon Films and Golan and Globus.

Grab some beer and pizza for a late night viewing you won’t be disappointed in Cyborg.   Scream Factory has gone above and beyond for this release.  HIGHEST POSSIBLE RECOMMENDATIONS!!!

Scream Factory’s Blu-Ray of Cyborg is out on April 24th.