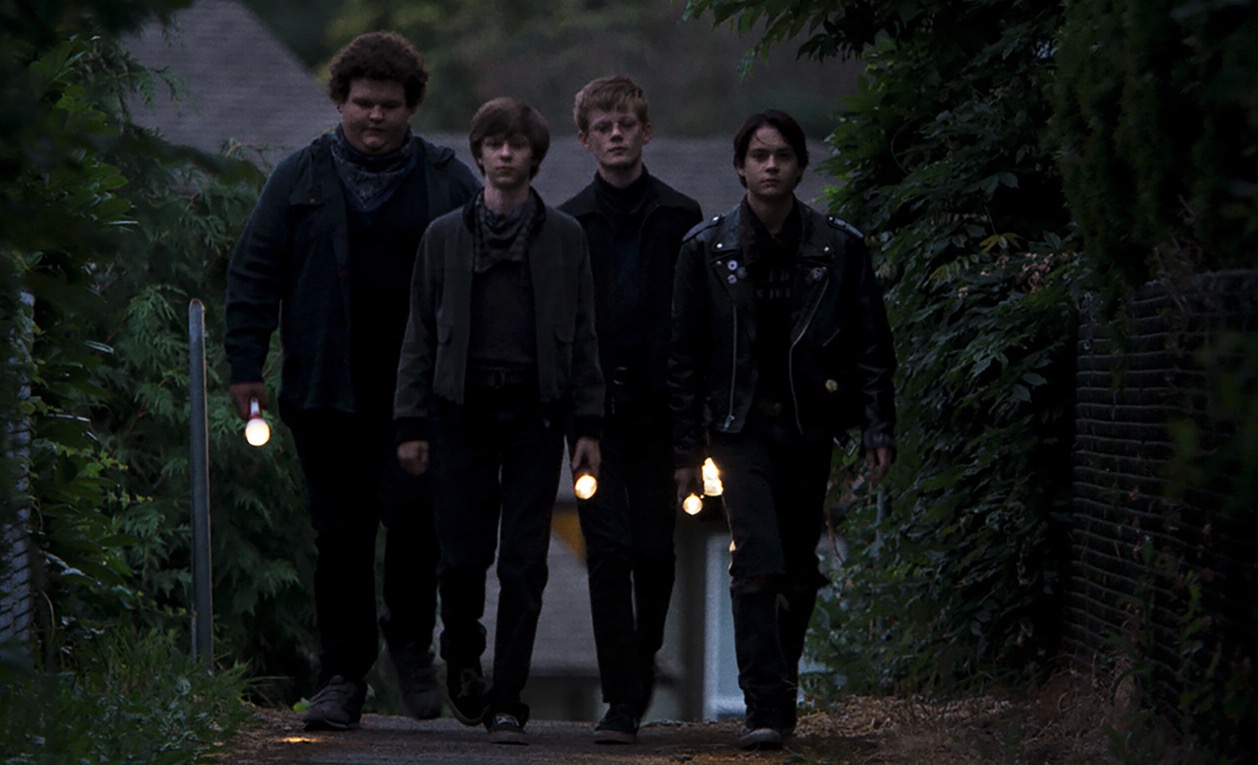 It would be too easy to dismiss Summer of ’84, the new film from the directing trio of Francois Simard, Anouk Whissell and Yoan-Karl Whissell (Turbo Kid), by simply boiling it down to its influences.  The elevator pitch would be that it’s Disturbia (2007) crossed with The Girl Next Door (2004) with a dash of Stand by Me and a dose of the ’80’s nostalgia of Stranger Things.  Firstly, it would be unfair to call the film a riff on Stranger Things when the script was written and the project was conceived prior to Netflix’s unveiling of their smash paranormal television series.  Secondly, and most importantly, the film ultimately transcends its mash-up of influences with its brave ending.

Kids are disappearing from a small Oregon town, and Davey Armstrong (Graham Verchere) is convinced he knows who the culprit is:  Wayne Mackey, an officer with local law enforcement.  In the tradition of L.B. Jefferies (Rear Window) and Charlie Brewster (Fright Night) before him, Davey spends his evenings spying on his neighbors with his binoculars and piecing together his very circumstantial solution to this serial killer mystery.

With the help of his three best friends, he patrols the streets of his small town searching for the evidence that will confirm Officer Mackey’s guilt.  Has Davey solved the crimes that have left local investigators dumbfounded?  Or does he have the overactive imagination of a kid growing up in a quiet little town?  I’ll never tell.

Summer of ’84 does many things well.  The suspense set pieces are well-staged.  The young cast gives convincing performances.  And the mystery unravels at a steady pace with no real lags in forward momentum.  The only downside?  You will feel like you’ve seen a lot of this before.  A pack of guys looking at nudie magazines, talking about the hot girls in class.  Hanging out in an old treehouse and planning nocturnal neighborhood adventures.  Movie posters from the ’80’s adorning the character’s walls and pop culture references getting dropped at a steady clip.  It’s effective, but familiar.

Many lower budget thrillers clip along nicely until they hit a giant speed bump at the end of the film, and everything falls apart.  The Summer of ’84 is quite the opposite.  It’s ending elevates a film that can, at times, feel routine.  To describe the tonal shift the film takes in its final minutes would spoil the fun.  And The Summer of ’84 is fun.  The audience at the Chattanooga Film Festival laughed, gasped, and squirmed in their seats.  The film’s not a game changer, but it’s an entertaining way to spend a 100 minutes.  And there’s nothing wrong with that.