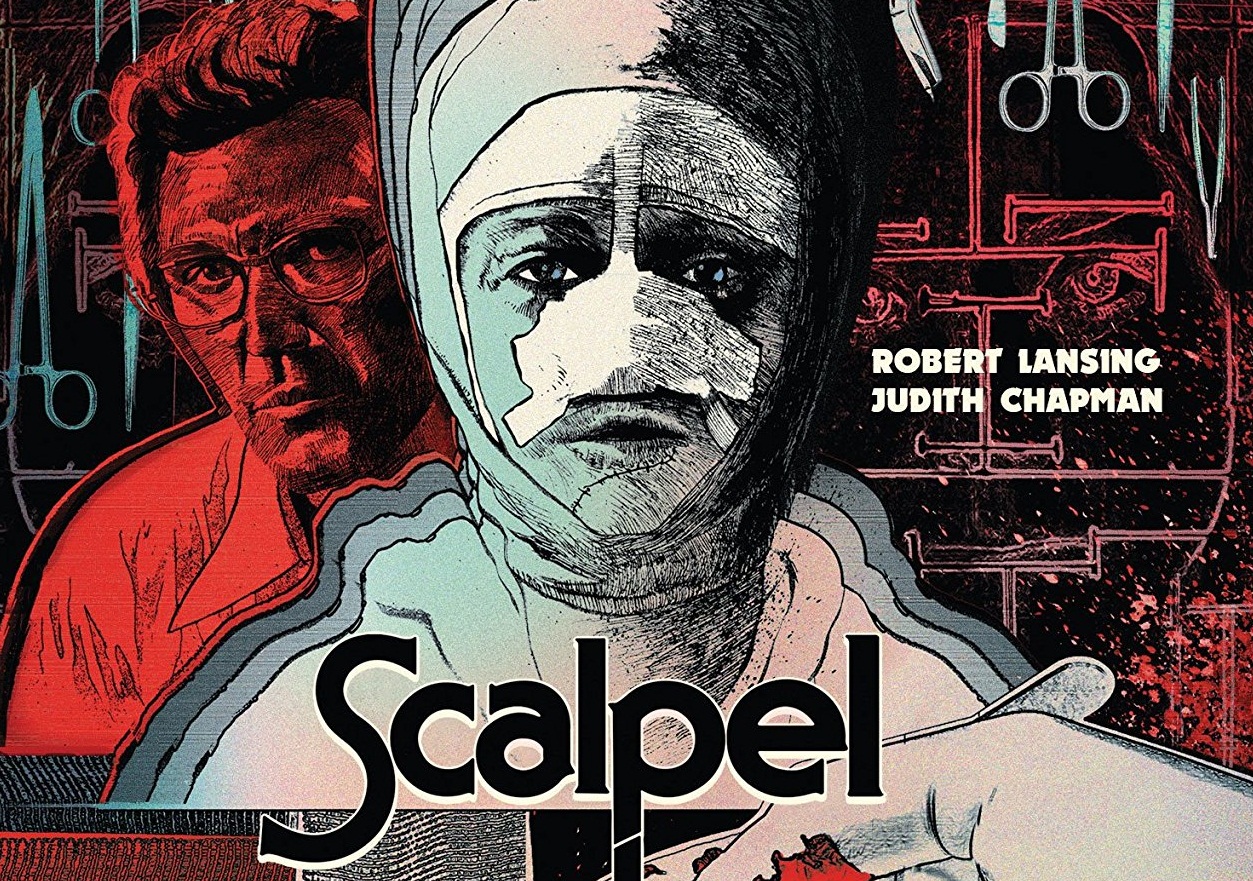 One would think that Scalpel from the name alone is some sort of proto-Dr. Giggles 80’s era slasher.  The film is anything but.  For all its lunacy and outright stupidity in logic, Scalpel is a highly effective gothic drama with some horror elements.  The film is a highly wrought piece of material that is not only steeped in the Southern Gothic Melodrama traditions but also heavily influenced by Film Noir.

Dr. Philip Reynolds (Robert Lansing) is your average Plastic Surgeon circa 1977; he loves his work, lifestyle, and his daughter all a bit too much.  Reynolds is also a Grade A Sociopath with an unnatural interest in keeping his daughter away from any men but him.  The good doctor so concerned with his daughter Helen’s (Judith Chambers) reputation after watching them mid-tryst, murders her boyfriend.  The entire murder and as he covers it up is witnessed by his disbelieving scion.

This event sets one of the most deliciously unpredictable plots of recent memory in motion.  The film feels equal parts Double Indemnity and Eyes without a Face. It delightfully relishes in the disturbing tale that it spins so confidently that you can’t help but be drawn into its rhythms.

Thankfully Scalpel never feels arched or overheated though some of the wilder plot threads could play out as such.   The subdued nature of the direction and the superb cinematography Edward Lachman (Carol) is what raises what could have been a sleazy exploitation picture into something more polished and refined.  In fact, Grissmer and Lachman’s visual acuity and skilled work creates a film that is far more nightmarish and insidious than low budget grindhouse film could have ever been.  In it’s more exploitative moments the film land on the restrained side of cinema, though giving the visceral kick that exploitation cinema can.

Scalpel hinders on its two (three) stars Robert Lansing and a double dose of Judith Chapman.  Chapman has by far the trickier role of the two actors.  The actress playing dual roles shows to be skillfully adept with even the most troubling actions the film asks of her.   It’s her performances that give the Scalpel its general sense of unease.  You believe that these two characters are separate people with separate lives and motivations.  Chapman does this through subtle things never calling attention but always ensuring that an audience knows who is Jane and who is Heather.

Lansing, on the other hand, is allowed to go to those dark places and relish in this truly transformative performance.  Dr. Reynolds is a pure sociopath without an ounce of guilt or remorse for anything he does.  The actor plays each moment to the next with a calm demeanor that only creates more unease and tension.  It’s the sort controlled and modulated performance we rarely get in films about this type of sociopathic killers.

Scalpel is outright great cinema.  Grissmer has created a little seen, highly effective, disturbing Gothic Drama.  This is truly an undiscovered gem that deserves a life on home video.

Arrow has provided not one but TWO brand new 2K restorations from original film elements.  Edward Lachman after hearing about them restoring the film got involved and helped them color correct to the specifications of how he shot the film.  The results are amazing lush picture diffused in tobacco filtered yellows with saturated deep blacks invoking the feel of the Southern Gothic Tradition.  The other transfer is a more traditional color correction done by Arrow Video without consulting Edward Lachman’s.  The results are a beautiful clean albeit flat picture that feels more run-of-the-mill fare.  Bravo to Arrow for including both but the Lachman corrected version is definitely the way to go.

The commentary by historian/critic Richard Harland Smith is an informative track, albeit a bit dry, that discusses the production and some of the history behind the Scalpel and Georgia film community as a whole (including managing to name check Sharky’s Machine).

The Cutting Edge is a 15-minute interview with John Grissmer, as he discusses how Scalpel came together.  The director is justifiably proud of the work and having worked with Lachman well before the Cinematographer became world-renowned.

Dead Ringer an interview with Judith Chapman discussing the challenges of shooting dual roles, and her lifelong friendship with Lachman that began with this film.

Southern Gothic is an 18-minute interview with Edward Lachman discussing the color correction and grading of the film, his work, and the production. The Oscar-nominated cinematographer goes into detail about his work on ensuring this 2K remaster looked exactly the way he had intended.

Scalpel is a great undiscovered film.  Arrow has pulled out all the stops to create a truly wonderful disc filled with insightful extras and two beautiful transfers.  The disc is already in the running for Top Ten Blu-Rays of 2018.  HIGHEST POSSIBLE RECOMMENDATIONS.