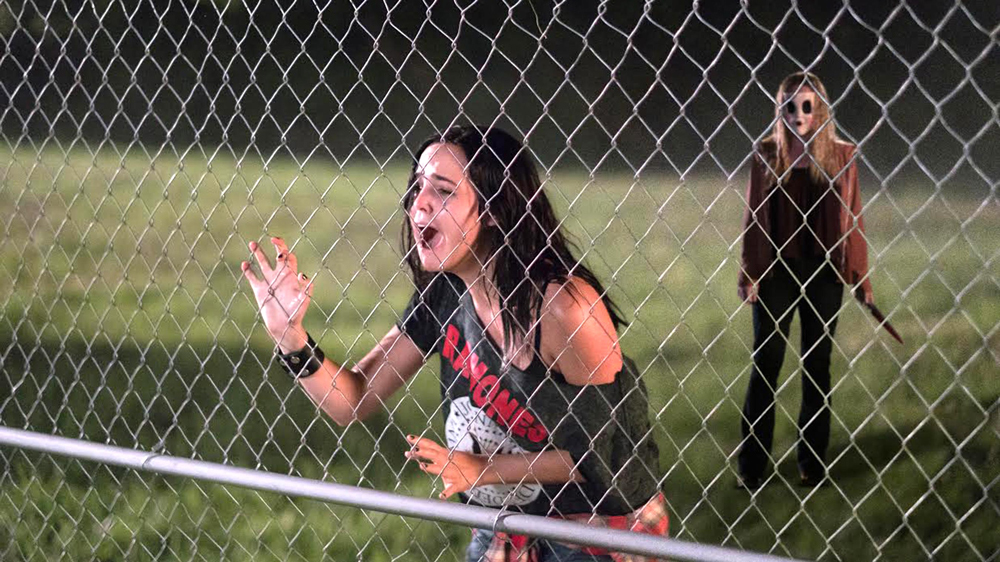 Sequel Proves to Be an Enjoyable Homage to ’80s Slasher Films

I hate the term “guilty pleasure”. It sounds like an apology, like you enjoy something the general masses frown upon, so you need to qualify it with a label. Guilty pleasure films are the pork rinds of cinema. You know they’re not good for you, but you consume them anyway. The Strangers: Prey at Night is one of those films, and I have no problem admitting that I enjoyed all of its 85-minute run time.

The Strangers hit theaters on May 30, 2008, and it proved to be one of the bleakest horror films of the 21st century. It offered some thrills and scares, but its dark undercurrent of dread and the persistent feeling that death was inevitable for its protagonists sucked all the fun out of the film. It’s a modern horror classic, but the average fan has only seen it once … and intends to keep it that way.

This loose sequel, on the other hand, puts the fun back in the slasher genre. The existential moroseness of the first film has been replaced with well-executed jump scares and Carpenter-esque cinematography that wrings every ounce of suspense from the film’s premise. Unlike the couple in the first film, this family has a fighting chance, and the audience becomes emotionally invested in their survival.

A family of four is taking their daughter to a “boarding school” for kids with disciplinary problems. They decide to save a few bucks and stay at the trailer park owned by an uncle. It’s the off-season, so the entire place is abandoned. Sounds like a great idea … unless you’ve ever seen a horror movie before.

Modern horror films tend to cheat when they generate their scares. Sound mixing has gotten so sophisticated, you can simply goose the score to an eardrum-shattering volume for a split second and make audiences jump out of their seats. But, that effect is about as satisfying as a car backfire.

Instead, Prey at Night earns its fear with old-fashioned staging and camera work. By playing with foreground and background and split focus, we often see the danger just before our protagonists do, and we’re squirming in our seats, wishing we could warn them. The sequence I will only refer to as the “swimming pool scene” is a master class in blending camera angles, lighting and a needle-drop soundtrack to perfect horror effect.

The Strangers: Prey at Night drips with 80’s influences. From its synth score to the Stephen King font of its opening title cards, the film capitalizes on the audience’s nostalgia for its slasher predecessors. If you find yourself watching horror films and missing the “good old days” of the genre, Prey at Night should satisfy your craving for some retro-scares.

3 comments on “Film Review: The Strangers: Prey at Night”