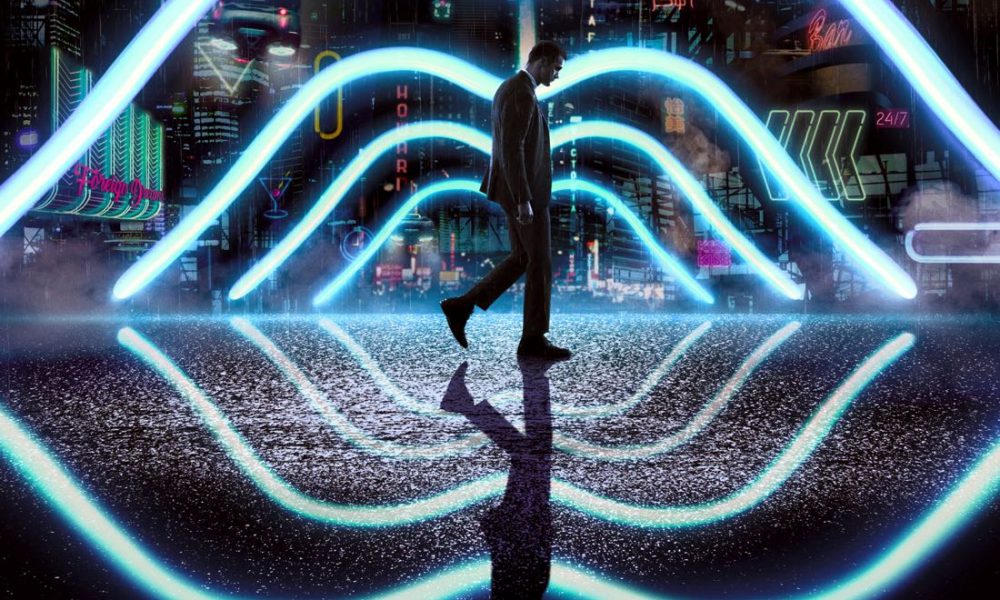 Marie reviews Duncan Jones newest film Mute and ponders how a film fashioned with such love by its creator, but a disappointment for the viewer.

Mute is the long-nurtured project from director Duncan Jones (Moon, Source Code) which has been promising great things since Jones announced it was ready for release. Starring Alexander Skarsgård as Leo, a man rendered mute in childhood as a result of an accident, Mute follows Leo through a Blade Runner-esque futuristic neo-noir Berlin as he goes in search of his missing girlfriend Naadirah (Seyneb Saleh).

This search takes him deep into an underworld of neon, of private sex clubs, of gangsters and illegal medical procedures. Leo is hampered by both his inability to speak, and his lack of technology. In a world where so many gadgets are available and in fact required for everyday life in this world, a pen and a notepad are his tools – for some reason, Leo is Amish, living in a city of technology, and his family has disappeared from his life. Skarsgård manages to convey what he needs to without speech, but there is little finesse about it.

And then, somehow, Leo stops being the centre of the narrative, and we are asked to focus on an irritating medic (Cactus Bill, played by Paul Rudd) and his even more irritating friend Duck (Justin Theroux). Their story takes an even more lurid turn which is really quite unnecessary, resulting in the audience spending a large chunk of time with some extremely unpleasant characters in whom we have no investment.

Jones has been working on this for quite some time, and I’m guessing that it touches on some very personal themes for him – parenthood in particular. But I wish someone had had a quiet word in his ear about the way his female characters are portrayed. ‘Characters’ is a bit of an overstatement, really. Leo’s girlfriend Naadirah, who goes missing early on, works as a waitress in a lap-dancing club wearing only her underwear. Most of the women are dancers, waitresses or sex workers, and wear very little. There is a gratuitous shot of Naadirah in the shower, and completely unnecessary views of young girls wearing very short skirts bending over. There is no sophistication to it, and it actually makes Blade Runner feel like a feminist tale.

The world-building and technological ideas are beautiful, and the sly nods to the fact that it is the same universe as Moon are nicely done. But I had so desperately wanted to like this film that the disappointment was difficult to shake off.

Mute is available to stream on Netflix