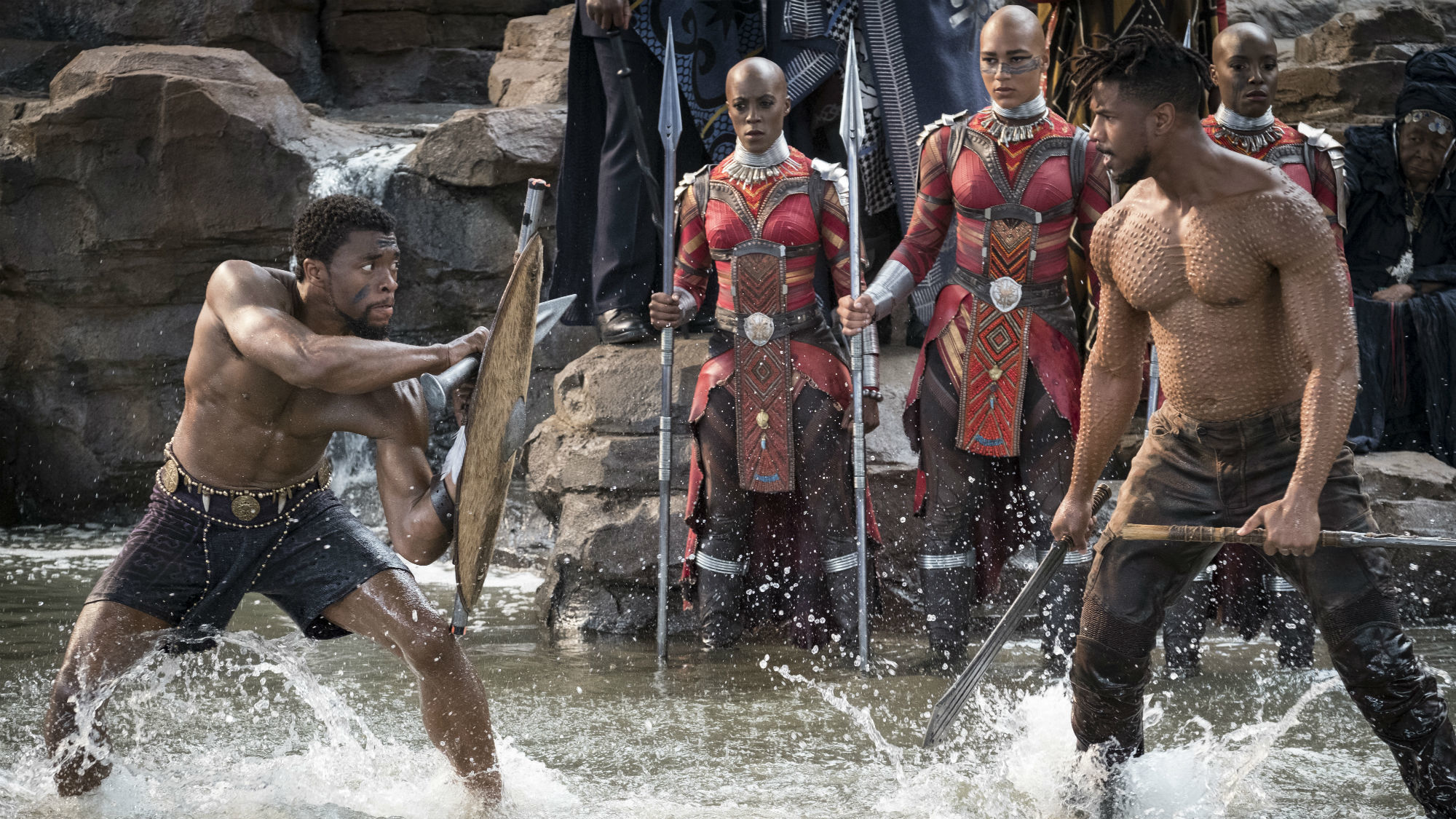 Marie gets her passport stamped on a visit to Wakanda, and ends up wanting to play with all the toys. The Movie Isle’s review of Black Panther is here!

The Black Panther character was an exciting addition to the Marvel Cinematic Universe in Captain America: Civil War and his appearance headlining his own story does not disappoint.

The opening scene beautifully sets out the story of Wakanda with some gorgeously crafted imagery to aid the story-telling. Wakanda is a beautiful country. It has rolling fields ideally suited to agriculture, snow-capped mountains, and cascading waterfalls. It is a peaceful nation, with its five tribes putting their differences aside and working together to maintain a civilisation that is largely untroubled by violence. It is also a technologically advanced society, untouched by colonial invaders, which has chosen to keep its technology to itself rather than run the risk of it falling into the wrong hands. As a result, Wakanda has gone to remarkable lengths to keep its true potential hidden, allowing itself to be regarded globally as a third world nation.

What is especially pleasing about this set up is that none of the above information is required from other films in the Marvel Cinematic Universe – Black Panther can be enjoyed as a standalone movie in its own right, although it does touch on enough references for the knowledgeable audience to see where the connections are.

The cast is extremely strong. Chadwick Boseman is every inch a leader as T’Challa – charismatic, honourable, but perhaps flawed. He commands allegiance. His nemesis (or at least, one of them) is Erik Killmonger (Michael B Jordan); also charismatic but slightly less honourable. It’s a sign of good story-telling that the ‘villain’ here has understandable reasons for wanting his revenge, to the extent that it’s not a great stretch to accept that some people might even take his side.

The threads of kinship and culture, bondage and oppression are woven throughout the story, as parallels between Erik’s childhood experiences in California and the African peoples enslaved are drawn.

I’ll admit that I am deliberately skirting around the obvious talking point here. The buzz around how important this film is with regard to its black cast, its messages of anti-colonisation, anti-slavery, anti-oppression and empowerment, is not lost on me. But I genuinely feel that it’s not my place to even try to convey the significance of this; as a white person who has clearly no idea of living a black experience, I don’t feel qualified. I’ll leave that to those who can more eloquently express the impact this will undoubtedly have.

Where I do feel I can lend my voice though is in delivering praise for the writing and portrayal of the female characters. Not one of them is there for purely decorative reasons. Although there are vague romantic connections these are not the main reasons why the women are there. They are all strong in their own right, with well-defined roles, purpose and agency. It’s hard to choose a favourite – it could easily be Lupita Nyong’o’s Nakia, an intelligent spy and kickass warrior. Or it could be Okoye (Danai Gurira), leader of King T’Challa’s bodyguard and fiercely loyal to Wakanda. (Also, she goes out for the evening anticipating having to fight – and wears flat shoes like a boss!!) It could even be Angela Bassett just for being Angela Bassett (T’Challa’s mother Ramonda). But the woman who brought me most joy was Shuri (Letitia Wright), T’Challa’s scientifically gifted younger sister. She is enthusiastic, funny, clever and kickass, and always has just the right comment at the right time. She’s kind of like a cooler version of Bond’s Q and I loved her.

If I’m being very picky, I thought some of the CG was a little lacking in places – mostly during battle scenes, where there didn’t always seem enough physical weight to the fighters. I also missed some of the Black Panther’s feline moves which seemed to be more prevalent in Captain America: Civil War.

This is, though, a very different snapshot of the Marvel Universe. There is very little movement around the world in Black Panther; the majority of the story takes place inside the borders of Wakanda, and spending so much time there makes it feel truly real. Ryan Coogler has carved himself his own niche in the MCU, and it is a joy to behold.

Black Panther is in theaters around the world now.