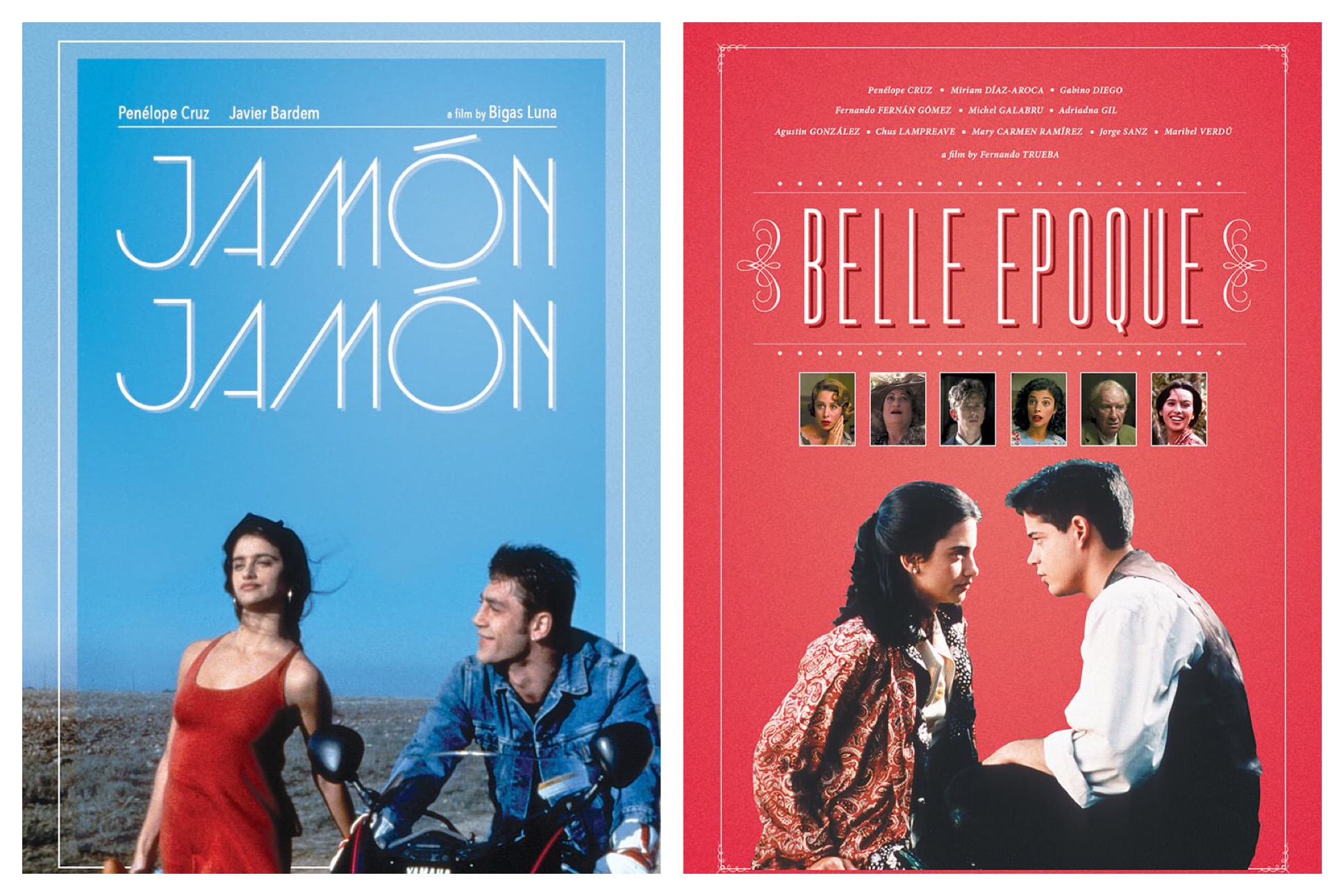 The Film: Jamón, Jamón, and its themes may be lost in translation for many of us that did not grow up in Spain but that does not take away from its power as a film. The comedy-drama plays more drama than comedy those expecting something more akin to the lighter work of Almodovar will be disappointed as Jamón, Jamón.  Those more adventurous will find a darker drama with comedic elements that will delight and possibly shock.  Director Bigas Luna’s film benefits enormously from the casting of the love triangle at the center of the film.  Penélope Cruz, Javier Bardem, and Jordi Mollá all cast at the time as relative unknowns are at the center of the love triangle.

The setup is simple; José Luis (Mollá) loves Silvia (Cruz).  Conchita, José Luis’ mother, hires wannabe Lahtraio Raúl (Bardem) to break up the not-so-happy couple.  The film when discussed almost feels like some sort of Soap Opera, though not as it unfolds.  There is a deadpan sense of humor at play in the film that keeps it from being overwrought.  Luna always seems to be playing counterpoint never letting anything get too serious or too comedic.  There are definitely moments of purposely outlandish sex and fighting but the film finds a balance between that and the crueler aspects of what these two men put Silvia through.  That almost perfect balance is what earns Jamón, Jamón its ending.  Though not as shocking as Fat Girl, be warned it does get dark as that film does.

The Transfer: The transfer is excellent showing no real signs of age; the image is beautifully reproduced here. Olive Films continues to get wonderful transfers from different studios they work with.

The Extras: No extras were included for this release.

The Bottom Shelf: For fans of Spanish films this is a no-brainer as Jamón, Jamón is still one of the great examples of how Spanish are able to mix pathos, comedy, and sex into a heady brew. Recommended.

The Film: Talk about being pleasantly surprised by a film.  Belle Epoque could be described as a Merchant/Ivory production that happens to be funnier, sexier and bawdier.  Set around the eve of the second Spanish Civil War (it’s at the beginning of the era that Pan’s Labyrinth takes place in) the film charts the relationships and the woes in love that Fernando (Jorge Sanz) experiences with the four daughters of an older man he befriends Manolo (Fernando Fernán Gómez).  There is a certain charm that fills the entire running time that cannot be denied.  Many will think that just by the description this is some sort of un-PC sex farce.  Fear not, Belle Epoque is much smarter than that.

The film is helped by the casting of the four sisters; Miriam Diaz-Aroca, Ariadna Gil, Maribel Verdú, and Penélope Cruz.  Each shows why they became the biggest actresses in Spanish cinema for more than two decades.  Each of them is given plumb roles that allow them to show off never bleeding into the background. The film excels at always keeping the daughters and their interplay front and center.  It’s never Fernando that is in power of the situation but the women he’s attempting to woe.  In fact, most of the comedy is derives from that very fact.  Co-Writer/Director Fernando Trueba keeps everything together with charm and a lighter-than-air touch that recalls the best Screw Ball Comedies.

The Transfer: The transfer on Belle Epoque is wonderful.  Much of the film is set in the countryside of Spain.  The image is beautifully reproduced here. The film manages to handle the tricky issues of a film taking place during the night and day wonderfully.  The nights have wonderful contrast levels and sharpness. The daylight scenes never feel washed out.  It’s a robust almost perfect transfer.

The Extras: No extras were included for this release.

The Bottom Shelf: Belle Epoque in a word is delightful.  Recommended.