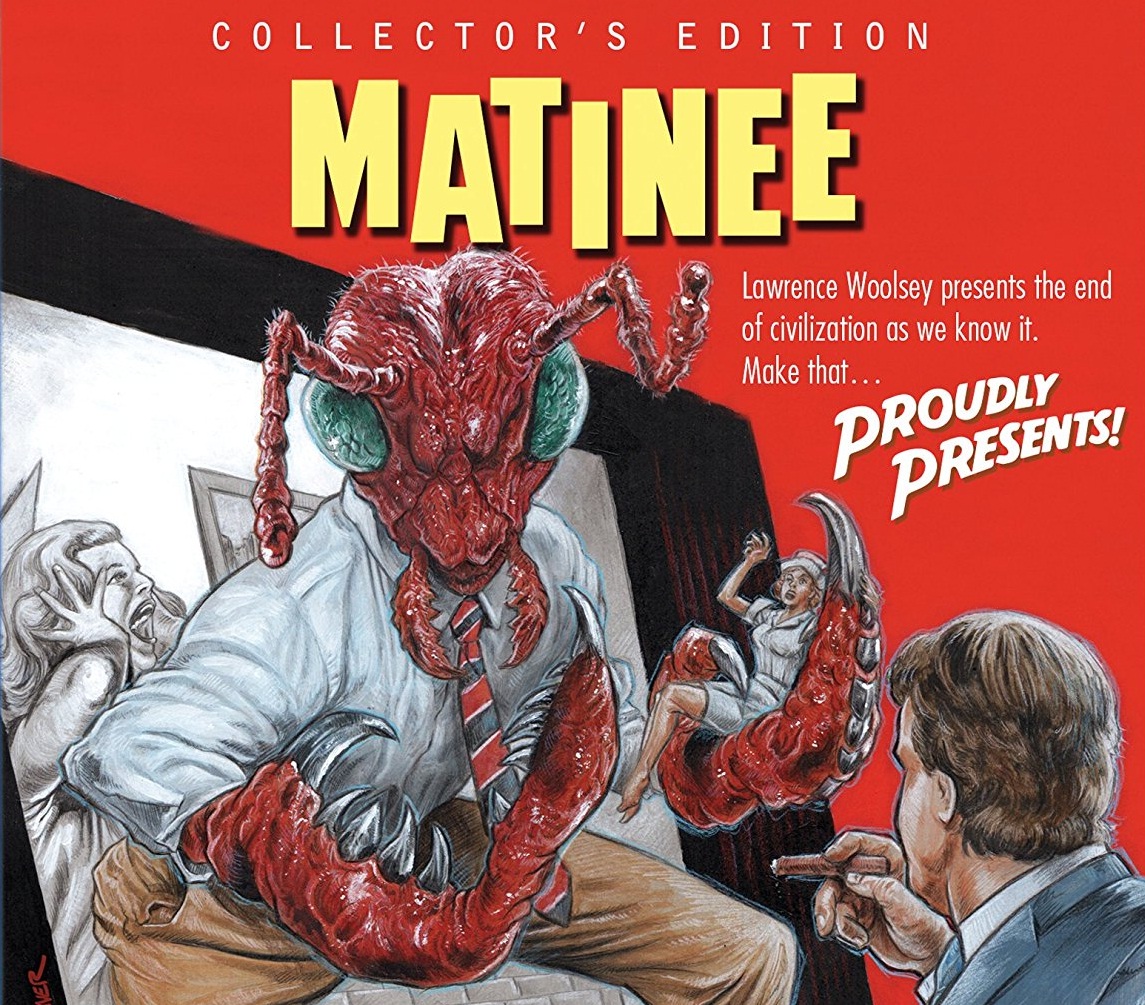 Adam takes a trip down memory lane with Shout Select’s newest release (and the first release of 2018) Joe Dante’s Matinee.  Is this nearly forgotten Dante film just another nostalgia bomb or something more?  Read on …

Joe Dante with Matinee manages to toe that tricky high wire act of nostalgia and clear-eyed critique.  The film though about the yesteryear of film showmanship ala William Castle the film is really about the Cuban Missile Crisis and the fear it instilled in many.  The film frames its story against the tense standoff between Russia and the U.S. in the early 1960s.  Dante shows us that time right before the upheaval that the Mid-1960s would bring to America and it’s ruminations that were already within that fabric ready to push its way to the forefront.

Set in Key West Florida the film is purposeful about everything it does and the stories it tells.  Though our main character Gene Loomis (Simon Fenton) has normal worries any young film geek does like girls, fitting in, and the normal pressures of adolescence his is added with his father being recently deployed on a Naval Destroyer.  The secret maneuvers, we as an audience know are the beginning of the blockade that would raise tensions Worldwide.

How Dante is able to balance the right amount of comedy and drama inherent in the story is one of the delights of the film.  The filmmaker and his work have never gotten the sort of critical praise that is worthy of just how genius it is and Matinee is no exception.  The director takes a story overstuffed with ideas and manages to play out each one of them giving them their due.  What could have easily run well into the two-hour range but is kept to a brisk ninety-nine minutes.

Matinee has the sort of character-based genre comedy that ranks amongst Dante’s best work but adding a component of true emotion that Dante had never fully explored before and since.  The film is special even amongst Dante’s filmography.

Shout Select continues their streak of beautiful transfers with Matinee.  The film shot on location in Florida benefits from the much needed High Definition transfer and remaster (the film was remastered in 2K recently for an Arrow Release, this appears to be the same transfer).  Having very fond memories of seeing this in the theater, the film has never looked better than it does here.

Matinee comes stacked with a fallout shelter food supply amount of special features.  Culling the content from the UK Arrow Video Release, the German release, and archival features from the DVD Shout Select has put together everything you could want in this release.  The content is well over four hours, enough to keep you busy until the nuclear winter!

Master Of The Matinee, and Paranoia In Ant Vision, The first is a close to forty minute interview that Dante discusses how the project came about and how it evolved from a movie about a bunch of theater employees to the ode to William Castle and early 60’s era genre films it became.  It may be the best feature of the disc just because how unfiltered and honest Dante is about the entire production of the film and the challenges of filming at Universal Studios Florida that was a theme park and ill-equipped to handle a production.  The second is another archival interview that discusses the production in even greater detail.  The information is only slightly overlapping between the two.  But in lieu of a commentary, this 90 minutes of interviews do well to get Dante’s thoughts on the making of the film and the film itself in the greater context of his career.

The Leading Lady is another thirty-minute interview with Cathy Moriarty.  Moriarty is a great interview as she recounts her career leading up to and the production of Matinee.
Out Of The Bunker, is an interview with a retired child actor and now writer Lisa Jakub.  The interview charts her rise to prominence and the filming of Matinee and post-Matinee (she was also in Mrs. Doubtfire a few years later) becoming a writer.

Making A Monster Theatre, The Monster Mix, and Lights! Camera! Reunion!, are all thirty-minute interviews with behind the scene crew members Production Designer Steven Legler, Editor Marshall Harvey, and Director Of Photography John Hora.  Each respectively talks about their careers before in brief and discuss at length the challenges that Matinee presented to them.  Each makes specific references to the filming at Universal Studios Florida and the ill-equipped nature of the studio theme park to handle their needs.  Interesting tidbits like Legler discussing how they had to give back the “wood” for sets because they got it at a discount (to save money), or Hora shooting in true Black & White for the B&W scenes (mainly for MANT!).  They each are fascinating and very technical in their information.  Those that love the more “nuts & bolts” of filmmaking will love these interviews.

MANT!, and MANTfantastic! The Making Of A MANT!, together are the cheekiest features on the disc.  The making of MANT! goes over the special effects work gone into creating the creature suit and effects of the film within a film.  One is warned that the “feature-length” version of MANT! is a bit misleading as it’s only 16 minutes long.  That is a minor gripe for a great feature that anyone that’s at least a little bit in love with Matinee will gobble up.

Behind The Scenes Footage Courtesy Of Joe Dante, and Deleted And Extended Scenes Sourced From Joe Dante’s Workprint, take this special edition and bump it up a notch.  Dante giving Shout access to these two pieces make this extra special.  Especially the Behind-the-Scenes video footage, which is fantastic.  It’s raw and unfiltered and the kind of feature that Dante geeks and fans of this film are going to love.  The deleted and extended scenes make one wish they had included this “Workprint” that Dante has in his possession (similarly to The Burbs’ special edition that Arrow Released a few years back).

Vintage Making-Of Featurette, Still Galleries, Theatrical Trailer, round out the disc.  The making-of and trailers have a distinct early 90’s feel to them.  Many will find both appealing because of the particular nostalgia for that kind of EPK material.  The fact that Shout Select took the time to find these materials is a testament to how great their releases are.

Matinee is a no-brainer for any film geek, especially the Joe Dante aklytes.  Shout Select has started 2018 with a 10 megaton release.  HIGHEST POSSIBLE RECOMMENDATIONS!!!!