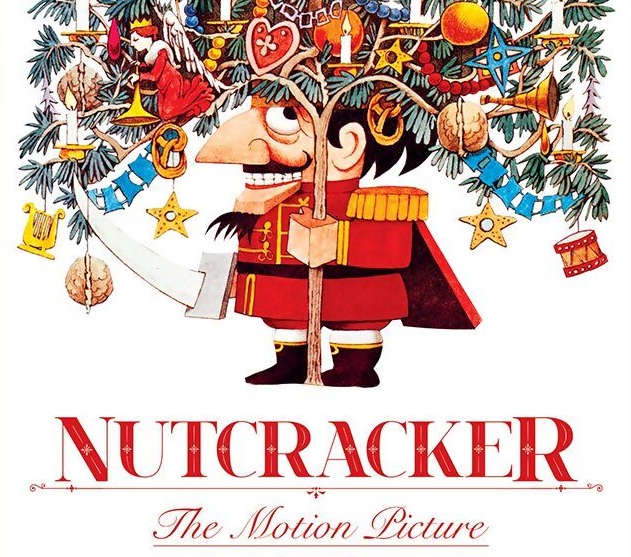 Adam reviews the yuletide of weirdness that is Carroll Ballard’s Nutcracker: The Motion Picture being released by Olive Films on Blu-Ray.  Does Ballard keep his streak of visually striking films?  Is this a forgotten gem or forgotten bargain bin?  Read on …

We can all agree that Carroll Ballard makes beautiful and striking films?  The Black Stallion may be the most visually arresting adventure film ever filmed.  Fly Away Home is one of the best father-daughter films ever made.  With that I must confess that Nutcracker: The Motion Picture is beautiful filmmaking to be sure.  Though it the film may not be suitable for children.

That isn’t a bad thing.

Everyone knows the Nutcracker Suite by Tchaikovsky, it’s the music that most epitomizes the coming of winter and for many, Christmas.  The music is also associated with a ballet based on the music telling the story of a young teenager’s dream of a Nutcracker turned Valiant Prince, the Rat King and the love triangle between them.  It’s a ballet that if one is not into ballet one has at least heard of or have seen a glimpse of (similarly to Swan Lake).

The adaptation Ballard made is very faithful to its source material reinterpret by Maurice Sendak (author of Where the Wild Things Are) and Choreographer Kent Stowell.  The faithfulness to their adaptation borders on deranged.  Deranged because none of the Nutcracker’s sexual subtextual has been stripped.  Sendak did not veer away from the adult thematics of the original ballet but rather laid into them.  The Nutcracker suite like Alice’s Adventure in Wonderland is the artifice of fantasy as a subterfuge for a young woman journey to adulthood.  The subtext not being removed or Disney-ized in 1986 (let alone 2017) is a radical idea for something considered “family fare”.  Many who would want to play this for the entire family may want to think twice, or at least watch it first.

Though the subtext may be trouble for some, many will agree the dancing on display is lovely.  Those tuned into the world of Ballet will not be surprised to learn The Pacific Northwest Ballet was the company used for the film.  For years PNB (based out of Seattle) has been known as an Elite Company, with one of the strongest fan bases in all the United States.  The performers exquisitely render the numbers and individual performances beautifully.  Much of the heavy lifting is done by the nimble, gracefully agile performers.  Watching the skill on display throughout the film will delight any dance aficionado.

The Dance Company is aided greatly by Ballard, cinematographer Stephen H Burum (Body Double) and editors John Nutt & Michael Silvers.  The group creates a visual style that conveys emotions through close-ups but always allowing for the dance and synchronicity of rhythm to never be out of place.  When done correctly, as it is here, the style becomes an invisible illusion to enjoy but never to be noticed.  Ballard has always been a director fascinated with movement be it humans or animals.  Making him the perfect complementary director for Nutcracker: The Motion Picture as a director as a ballet at its purest is emotion through movement.

Ultimately Nutcracker: The Motion Picture is a beautiful strange experiment mixing theatrical trickery with optical effects that is a perfect showcase for Pacific Northwest Ballet Company’s accomplished work.  Ballard and Burum create a heady brew, giving us something akin to Powell and Pressburger’s The Red Shoes.  Those looking for verisimilitude (though looking for reality in a ballet I don’t know why) or modernist approach to effects work should look elsewhere.  Those that love the beauty of stage theatrics will find this one a winner.

Olive Films has gotten a solid transfer.  There are some minor dirt and specks.  But the image is sharp with a nice amount of grain.

There were no extras included on the disc

Want a dose of beautiful strangeness for your Holiday Season?  Look no further than Nutcracker: The Motion Picture.