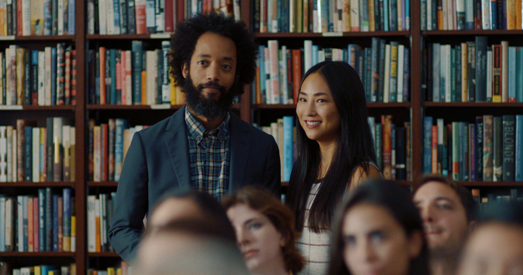 Adam reviews the debut feature from Laura Terruso, Fits and Starts. The film stars Wyatt Cenac and Greta Lee and played the AFI Film Festival 2017 as a part of their American Independent section.

The debut feature from writer director Laura Terruso is an amiable comedy that showcases the chemistry and talents of its leads Wyatt Cenac and Greta Lee.  The duo plays a married couple whose relationship is strained by the success of one (Lee) and the stagnation of the other’s (Cenac) writing career.  Over the course of the film David and Jennifer are separated on their way to a Connecticut “Writer’s Salon”.  Much of the comedy is derived from David’s interaction with the various kooky self-involved characters that populate this party.

Terruso takes a concept that could have been another banal boring twee indie comedy and subverted it with the right amount of heart, intelligence and truly sharp wit to rise above what’s become the norm in independent comedy and festival darlings.  Terruso has found a great combination of leads in Cenac and Lee.  Their chemistry and work together is the solid foundation for the entire film. You believe these two are in a relationship.  Moreso than the believiblity of the relationship is the way that Terruso is able to imbue the relationship with those moments of stress.

The film finds a way to be both broad and intimate without leaning heavily on either.  Many will delight in the films comedic set pieces that build to not just a comedic but emotional high point that recalls the work of Preston Sturges or Howard Hawks.   Fits and Starts as debut features go finds us introduced to a new comedic voice.  By its end you’ll be anticipating the new film by not just Terruso but stars Cenac and Lee.