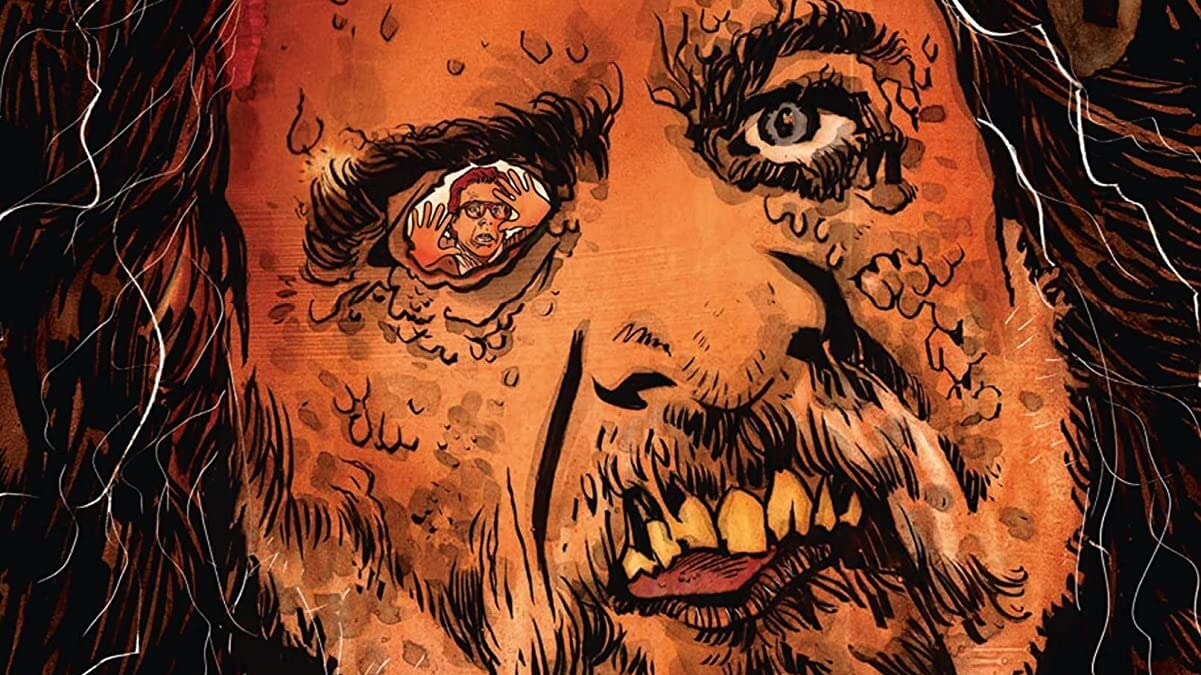 FX maestro of Cronenberg’s The Fly Chris Walas’s directorial debut The Vagrant is as nasty and hilarious a thriller as you’ve ever seen.  Arrow Video’s Blu-Ray sporting a new 2K restoration.

Some movies tickle you in the right way.  No matter how mean they are they manage to make you laugh.  No matter how gross-out disgusting they get you can’t help but giggle through the gagging.  The Vagrant is just that sort of film, deeply disturbing but laugh-out-loud funny.  Thanks in large part to the go-for-broke performance by the late-great Bill Paxton.

Early ‘90s yuppie – look up the term kids – Graham Krakowski (Paxton) has his life just about set.  The right lady (Mitzi Kapture), the right job, the right car, all he needs is that right home.  The right home Graham thinks he gets.  That is until a Vagrant (Marshall Bell) in the lot across the street shakes his yuppie picture-perfect existence.  Graham slowly but surely begins a twisted psychological game with the man that may or may not be a part of his imagination.  Throw in murder, panty eating, trailer parks, Michael Ironside as a fascist super cop, and canned tuna for a recipe for an epic showdown of goo, slime, viscera, and blood.

It’s not a mistake that one sees that Mel Brooks produced the film through his Brooksfilms production company.  There is a sense of humor – albeit a very dark one – that surrounds the film from its opening moments to the closing title card.  Richard Jefferies’s script is acutely aware of the troupes and conventions of similarly minded genre fare and does a great job of upending those.  Walas’s direction is go for broke stylish with an aim for humor.  The work here goes beyond an understanding of how to stage effective makeup FX work.  Walas working with cinematographers John J Connor and Jack Wallner shows a visual talent that should have been used far beyond this film.

Though the reason The Vagrant is such a deliciously evil ride is the performance of Bill Paxton.  Paxton understands the sweaty underhandedness of Graham who is essentially the ‘90s answer to a simp.  The star makes meals out of everything in his performance.  Whether it’s cowardly hiding behind a tree as the police arrest the vagrant or its speaking Polish to a prospective client there is something hilariously sweaty and nervy about everything Paxton does. Though it should be mentioned Marshall Bell as the title character is more than a willing and able sparring partner.

The Vagrant is for anyone with an appreciation for a mean-spirited dark comedy with enough gross-out gore effects to make you queasy.  If that fills your bill… buckle up and enjoy the ride that this one has in store for you.

The brand new 2K restoration by Arrow Films from a new scan of the original camera negative is an utter delight.  The razor-sharp transfer’s highlight is the contrast and black levels that are near perfect representation of the film.  Primarily set at night the film on disc is positively luminous.  Arrow has done a marvelous job of creating a nearly flawless hi-def presentation.

Vagrant Memories (15:52) – is an all-new interview with director Chris Walas.  Some of the details include how he got the film after The Fly II, developing the script with Mel Brooks, casting and working with star Bill Paxton, the casting of the Vagrant – how it eventually went to Marshall Bell, the casting and work of Michael Ironside – and how funny/comedic he was, the casting and work of Colleen Camp, the production woes – Walas called it a “cursed production”, Walas hurting his back – so much so production made him a back bed of sorts, working with composer Christopher Young, and much more.  This is the next best thing in lieu of a commentary track as Walas highlights some of the anecdotes from this difficult production.

You are in Hell (14:59) – is an all-new interview with star Marshall Bell.  Some of the details include how he was cast in the film, the backstory behind the vagrant character, the tone that both he and Paxton discussed and worked together on, the difficulty in the make-up – in all the practical issues that you don’t think about including the Phoenix heat, his collaboration with director Walas, how he achieved the gait in his walk, the lack of input – because he liked the design – of the vagrant, and much more.

Barfus, Homicide (12:16) – is an all-new interview with star Michael Ironside.  Some of the details include how he enjoyed his time in the production – including a great anecdote about Bill Paxton and him during the fight scenes, the difficulties Marshall Bell had with the make-up in the Phoenix heat, his collaboration with director Walas, his disappointment in the fact that he didn’t get to have “more fun”, a great anecdote about bringing his father on set – the first and only time, working with Marshall Bell and his friendship with him – the first time was Total Recall and Starship Troopers, his work with make-up in this and other films, and much more.

Handling His Property (12:08) – is an all-new interview with star Colleen Camp.  Some of the details include Camp’s thoughts on the film, how she was cast – through an audition with Mel Brooks and Walas, the humor in the piece, what drew her to the part, and what she loved about the character, that she had worked with Bill Paxton – who was a prop master – the first time during his pre-actor days, what Walas wanted from her performance, her friendship and working relationship with Bill Paxton, and much more.

The Vagrant is the dark mean-spirited comedy you’ve been looking for.  Arrow has given it new life with a near-perfect transfer and insightful extras.  Highest Possible Recommendations!!