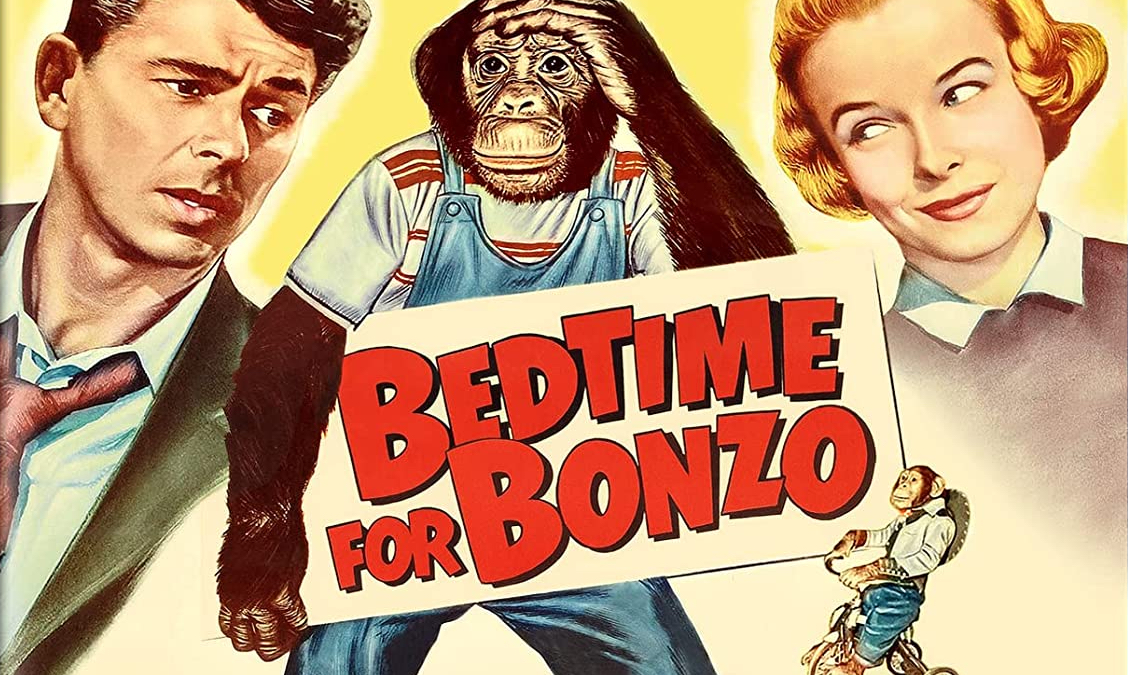 DARE to say NO to Bedtime for Bonzo.  Kino Lorber has released the Reagan and Chimpanzee starring vehicle on Blu-ray with a new 2K Master.

I’ve seen a lot of clips of Bedtime for Bonzo.  I’ve seen it in movies playing on TV.  I’ve never seen the actual oft-discussed film.

Now, deep breath, if one can look around the animal cruelty – it wasn’t just 90s sitcoms that had Chimpanzees as “talent” – and the visage of a president that many have outright (and justified hatred for), Bedtime for Bonzo is quite the charmer.  Though the above is inherent in the film, Bonzo is quite progressive in its thought on Prison and Prisoners, and it’s not so progressive thoughts on family values and animal experimentation.

As they say, never share the screen with children and animals.  Here is no exception as Bonzo (Peggy was the Chimp’s actual name but she was credited as Bonzo) is as agile and able performer as her human counterparts… maybe even more so.  There isn’t anything that Bonzo doesn’t do that pulls the rug from under actor Reagan and Lynn’s feet.  Nothing they do can charm or compare to Bonzo’s onscreen shenanigans.

At a breezy 82-minutes (with credits) if one does venture into the world of Bonzo – and this reviewer absolutely suggests you do – you’ll find no bedtime in sight.  Only a charming comedy that belies an undercurrent of deeply troubling behind-the-scenes and future concerns.

This brand new 2K Master provided by Universal is a beautiful representation of the black and white photography.  The image is handsome with a beautiful patina of grain giving this hi-def transfer a wonderful filmic look.  Universal and Kino have given us a sharp Blu-ray that looks like a freshly struck archival 35mm with nary a scratch or blemish.

The all-new audio commentary by Film Historian Eddy Von Mueller begins by telling the viewer they’ve made “the right choice” by purchasing this Blu-Ray and makes a claim to the similarities between The Brothers Kazamoff to Bedtime for Bonzo.  Some of the details include a detailed account of Reagan rise from B-Movie leading man to the 40th President of the United States, how Bedtime for Bonzo “haunted” Reagan’s political life, the Chimp who played Bonzo who was a female name Peggy, the work of silent film actors Herbert Heyes, Walter Slezak and their careers before and after Bonzo, an account of Reagan’s film career and how he came to Hollywood, where the phrase “win one for the Gipper” came from, Reagan beginning as a very progressive Democrat in the 40s and 50s, the nature vs nurture theme in the film that goes to a bigger theme that’s been something discussed even currently, the work and career of Diana Lynn, a side conversation about how MCA/Universal was formed and the history up until and how this related to Reagan’s rise to the SAG President, Reagan’s being an informant for the FBI – specifically Hoover – giving them information, Reagan’s back door dealing with GE and MCA that helped him solidify his career politically, the work and career of director Frank De Cordova, the work and career of screenwriter Lou Breslow, the interesting life of story credited writer Ted Berkman, the use of chimps in film and television until the 1990s, the sequel to the film, the various TV shows and films that used Chimps, the reasons why chimps are not used and the dangers of using live animals – including a terrifying account of an incident on the film Her Jungle Love, a larger conversation of the exploitation of exotic animals, and much more. Von Mueller’s track is a deeply researched and informative track for a film that’s been a punchline to Reagan’s political career.  This track is a vital part of the discussion of this film as it gives so much context and history for a film that many consider fluff.

Bedtime for Bonzo is a uniquely 1950s film.  Kino Lorber has added some great context to the film by including a truly great commentary track.