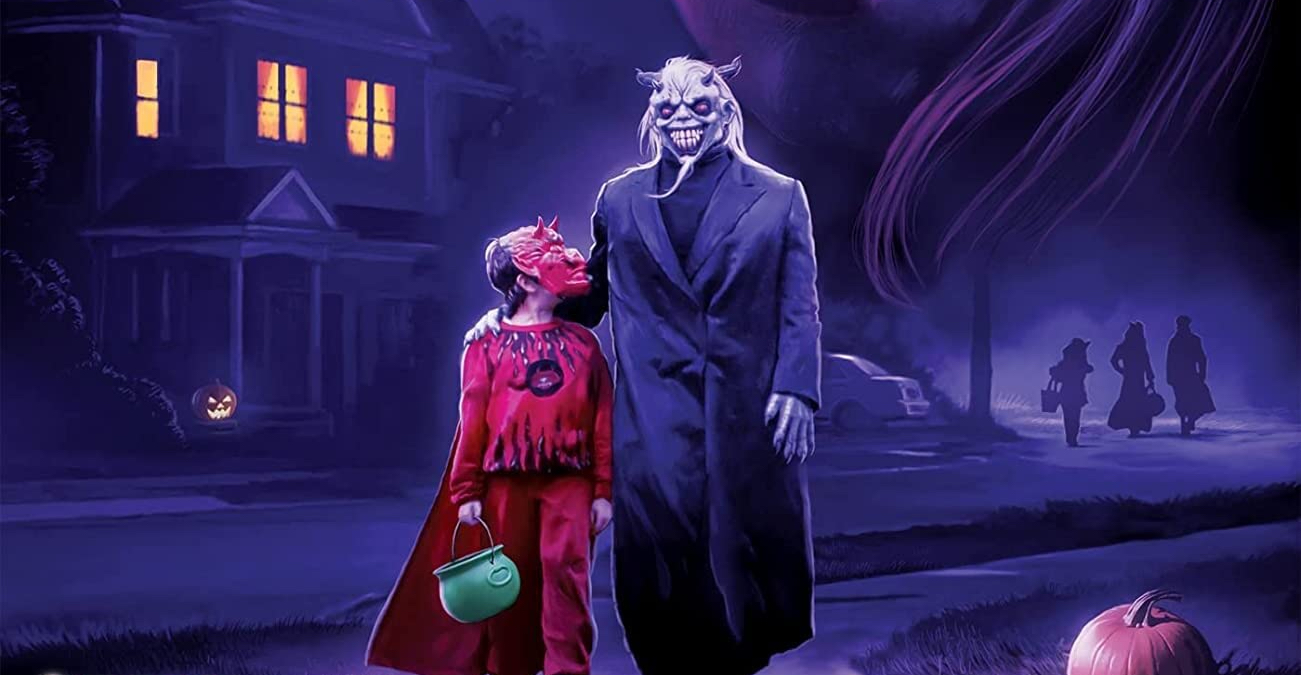 What if a kid mistook a masked serial killer for his hero Satan… That’s what you get in Synapse film’s Blu-Ray release Satan Little Helper.

Some movies just hit you in the right spot.  I always love when a horror film or any film does something transgressive.  Satan’s Little Helper does just that by giving a Slasher a plucky sidekick in the form of a Satan-obsessed 10-year-old named Dougie.  The results are darkly humorous.

Dougie is your average pre-teen kid.  He loves video games.  He looks up to his older sister.  And of course, he’s a huge Stan for Satan.  His mother (Amanda Plummer) waves it off as “a cute phase” she and her husband indulge him on. Sister Jenna (Katheryn Winnick) doesn’t see it that way. Home for the Halloween weekend from College to hang out with Dougie and introduce her new boyfriend Alex (Stephen Graham) to the fam.  Little does mom, dad, and sissy know that Dougie’s dream – to help Satan – is about to come true.  Though, Satan isn’t Satan but a vicious mute serial killer making mincemeat out of the local folks and cats.

Writer/Director Jeff Lieberman understands tongue-in-cheek better than most horror film directors.  His horror-comedy is more horror than comedy. But takes each as seriously as one would take the individual genres themselves.  Whether it’s a violent shopping cart romp, or a victim having their mouth on nose duct-taped together and unleashed at a Halloween party there’s always a sly wit – dark and twisted but a sly wit nonetheless – always present in the film.

The film is aided greatly by Alex Brickel’s performance as Dougie the literal little helper to Satan.  There’s a freewheeling game of play at work that many kids Dougie’s age play and it’s perfectly performed by Brickel.  There is never a moment you feel like Dougie thinks this is all a game.  When he does figure out that Satan is truly evil – Brickel definitely goes for broke.  Katheryn Winnick is good as Dougie’s older sister – give her a prize just for the number of questionable situations she agreed to.  The true prize is Amanda Plummer as Mother.  Plummer dives into the role with the same sort of zeal and strangeness that she brought to The Fisher King and Pulp Fiction.

Many will find some of this tasteless and crass but that is ultimately what a truly good low-budget horror film should be.  At least a large dollop of some tastelessness and crassness.  Less we forget that Roger Ebert had an outright hatred of the Slasher and continually would overstep the line as a critic – because of how incensed he was over something as pejorative as Friday the 13th Part V.

The most praiseworthy note I could give is that Ebert would have hated Satan’s Little Helper as much as he hated entries into Jason Vorhees’s universe to be sure.  Which would no doubt make Lieberman happy to no end.  This one is quite the little surprise.

The transfer by Synapse is flawless.  The film was shot – literally – with the same cameras as Star Wars Episode I and have been definitely tweaked and color-corrected to give it a more 35mm look.  The transfer is sharp and without deficits or artifacting.  Even contrast and black levels are beautifully reproduced.  Between this and The Kindred, Synapse is on a roll.

The archival audio commentary from Director Jeff Lieberman is a low-key informative affair.  Some of the details include the various locations shot around in the Northeast of America, the challenges working with Amanda Plummer – which isn’t any issue at all, the casting and working with Alexander Brickel, the various color corrections done, the casting and working with Katheryn Winnick – including the fact that she has a Black Belt in some form of martial arts, the interesting fact about Satanman’s coat and the specific style that Lieberman wanted, the first gen digital cameras used and the issues, and more.

The Devil in the Details: Making SATAN’S LITTLE HELPER (32:38) – is an all-new making-of featurette looking at the making of Satan’s Little Helper.  Lieberman begins with what he’s been doing between Remote Control and Satan’s Little Helper including winning an Emmy and writing Never Ending Story 3 (which this reviewer didn’t know existed).  The featurette dives into where Lieberman came up with the idea to the development of the script to the production to post-production and eventual release.  Some of the details include designing the mask, the various cost-effective tactics used by Lieberman, the various set pieces and how they were achieved, working with a child actor and the various anecdotes from that, losing the actor that played Satanman, shooting digital over 35mm and all the issue and concerns that added to the production, it’s showing at the Tribeca Film Festival, why it wasn’t released in theaters, its release on home video, issues with the release, and the cult that rose out of it, the prospect of a sequel and Lieberman’s thoughts on the sequel, and much more.  Featuring interviews with writer/director Lieberman, mask artist Jonathan Fuller, actor Alexander Brickel, cinematographer Dejan Georgevich, and others.

Mr. Satan’s Neighborhood: A Tour of the Filming Locations with Director Jeff Lieberman (22:37) – The all-new featurette much like the popular Horror’s Hallowed Grounds is a look at the locations used in 2003 in White Plains, NY, Hudson-Hastings, NY, and other northern NY to film the movie.  Lieberman is a hoot as he takes the Satanman mask with him on a tour of the various locations.  Rather than just a look at the locations, the director makes sure that he injects a lot about the production and changes that were made because of the location, and a few bits of informative filmmaking tricks – like using a park, making sure that locations are close to one another, and more.