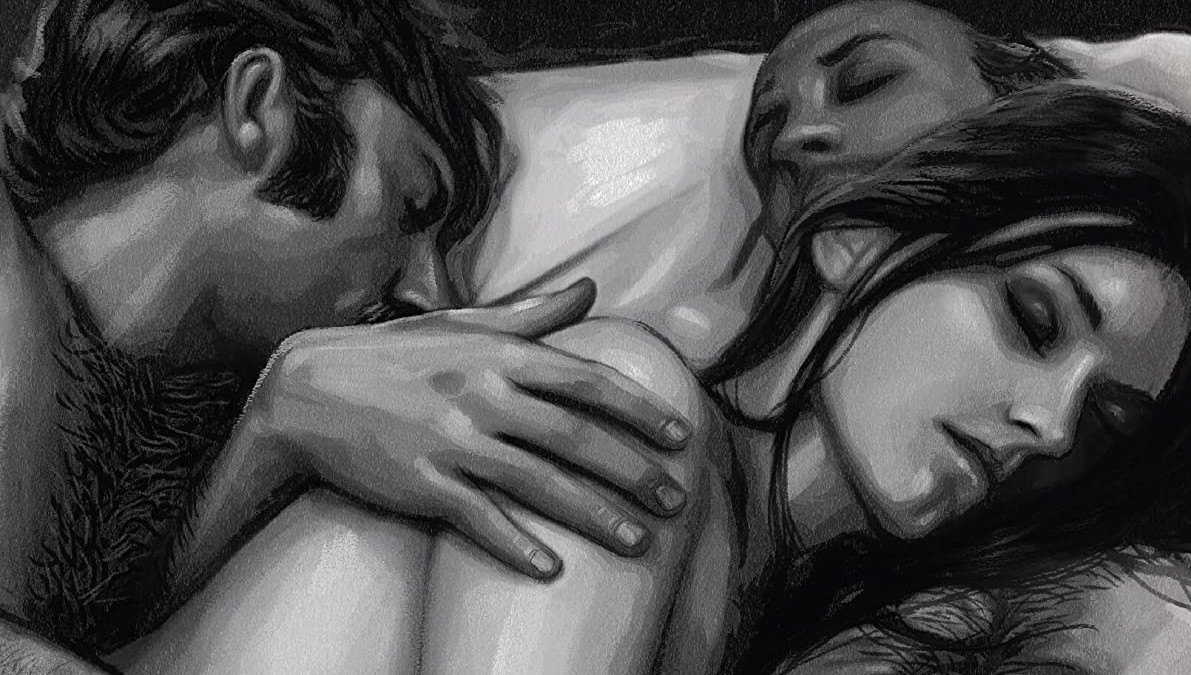 Quiet Days in Clichy – a true blue movie makes its 4K UHD debut from the mad geniuses at Blue Underground.

NOTE: This film depicts unstimulated sex and behaviors of a sexual nature that may be triggering to an audience member.

Henry and June was my first contact with Henry Miller.  I was 13 and finally saw the film was going to be on Cable. I recorded it, not telling my mother.  I watched it expecting what any teenager was expecting.  Phillip Kaufman had other ideas and I was just not ready for his ideas.  Having gone back to the film it is truly a fascinating piece of docu-fiction about artists in during a time that like Haight Ashbury was more fictional than reality.  Eventually, I did get to the written work of Miller.  Well before I saw the adaptations of his work.

Quiet Days in Clichy manages to catch the attitude, tone, and general milieu of Miller’s work more than any other adapted – especially Tropic of Cancer. Jens Jørgen Thorsen’s adaptation keeps the wort’s and all sex, sexism, and general hedonism of the tale of two friends fucking their way around Paris and the troubles they manage to get themselves in.

Make no mistake the work is raw and unencumbered by a critical eye toward the more unsavory behavior.  Thorsen’s film is distant enough to not lionize Joey (Paul Valjean) and Carl (Wayne Rodda) as anything more than they are; man-children.  Though if one is looking for condemnation or even a moral compass, please look elsewhere.  Other than in the final moments where a woman shrilly calls them out on their behavior – which is laughed off by both – the rest of the film is all about character and actions.

With its attitude and liberal use of nudity – male and female genitalia is shown without much revelry – and unstimulated sex Thorsen’s film is possibly one of most accurate of the adaptations of Miller’s work (Claude Chabrol adapted the same story in the 90s).  Beyond the sex and nudity, there is a freewheeling energy that Thorsen’s film captures that reading Miller’s text gives you.  Though many will find the approach to the visuals and the score by Country Joe – stuck in the late ‘60s era this was produced in.

Though not for everyone Quiet Days in Clichy is a vital piece of cinema that melds the extremes of cinema into something that transcends what people would consider “a dirty movie”.  Thorsen’s film is slippier than that.  One that allows you to condemn or endorse a character’s action of your own free volition. In an era where many see showing something on screen as an endorsement, this film is like a grenade into the chicken coop.

The brand-new restoration scanned in 4K 16-bit from its recently discovered uncut & uncensored original fine-grain negative, with Dolby Vision HDR is a black-and-white marvel.  Regardless of your thoughts on the film itself, the image is a stunner.  Black and White’s films are becoming a bit of a fetish for Dolby Vision encoding.  There is something about the contrast and black levels that create more subtle and nuanced in the transfer making them almost 3D-like in appearance.  Here is no different.  Bravo, to Blue Underground who continues to produce some of the most surprising and beautiful 4K UHD discs.

NOTE: The Deleted Scenes and Theatrical Trailer appear on both the 4K UHD and Blu-Ray.

Songs of Clichy – Interview with Country Joe McDonald (11:13) – in this archival interview Musician McDonald discusses the reverence that Miller’s work had at the time that he got the job.  Some of the details include having never met director Jens Jørgen Thorsen, having been hired, writing and recording the songs within a few months, having no direction other than his ‘Country Joe’ style, the sexual nature of the songs, the difference how it was received in Europe and how it was received in the US, the context in which the film was released in the late ‘60s, and much more.

Dirty Books, Dirty Movies: Barney Rosset on Henry Miller (17:19) – is an archival interview with Henry Miller’s editor and publisher Barney Rosset which opens with the Publisher discussing the difference between pornography and erotica. Some of the details include a title card indicating that Rosset had an FBI file on him by the age of 12 and would eventually be a part of the biggest censorship battles of the 20th Century, how he became familiar with Miller’s work, reading Tropic of Cancer was his indication he wanted to go into publishing, beginning with Lady Chatterley’s Lover which started his process of getting Tropic of Cancer, his contentious relationship with Miller, his gaining of various renegades of literature like Burroughs, Ginsberg, Selby, the productions of the filmed versions of Tropic of Cancer and Quiet Days of Clichy, the troubles with the productions and releases, some truly great anecdotes about director Thorsen and the film itself, his own releasing of films including I am Curious Yellow, and much more.

‘Midnight Blue’ Interview with Barney Rosset (25:04) – is an archival interview with Henry Miller’s editor and publisher Barney Rosset from the infamous late-night/public access program. Some of the details include how he actually got in trouble with the FBI, his time in college and how much he detested it – going back twice, the lack of a supreme court ruling after he was in trouble for publishing Lady Chatterley’s Lover, erotic material being an act of political defiance, the various personal anecdote, how during his time-fighting censorship he’s concluded it will never end, his own personal account of erotica, the sexual and political.  Anyone that wants an intelligent conversation about erotica and censorship should look to this outstanding interview, though this could ruffle some feathers as a discussion of censorship does.

Deleted Scene (6:11) – what could be called the Ménilmontant scenes which has Joey (Paul Valjean) post-sexual romp looking for food and finding it in the most repulsive places possible.

Poster & Still Gallery – the all-new Gallery consists of 82 images ranging from production stills, poster art, home video art, and various reviews from around the work that one can navigate through their Next and Back Chapter stop buttons on their remote.

Book Cover Gallery – the all-new Gallery consists of 26 book covers from around the world and various times for Miller’s Novel the movie is based on.  One can navigate through the Next and Back Chapter stop buttons on their remote.

Court Documents – this is a first for this reviewer.  An all-new gallery consisting of 14-pages of court documents regarding the film’s legal woes as it was shown.  These give privy to the type of censorship that was dealt with trying to release the film that are still relevant to today – unfortunately.  One can navigate through the Next and Back Chapter stop buttons on their remote.

Blue Underground’s done an astounding job with giving Quiet Days in Clichy, not just a wonderful transfer but considered extras that give some great context to this controversial piece of Literature/Film.  Recommended!!!