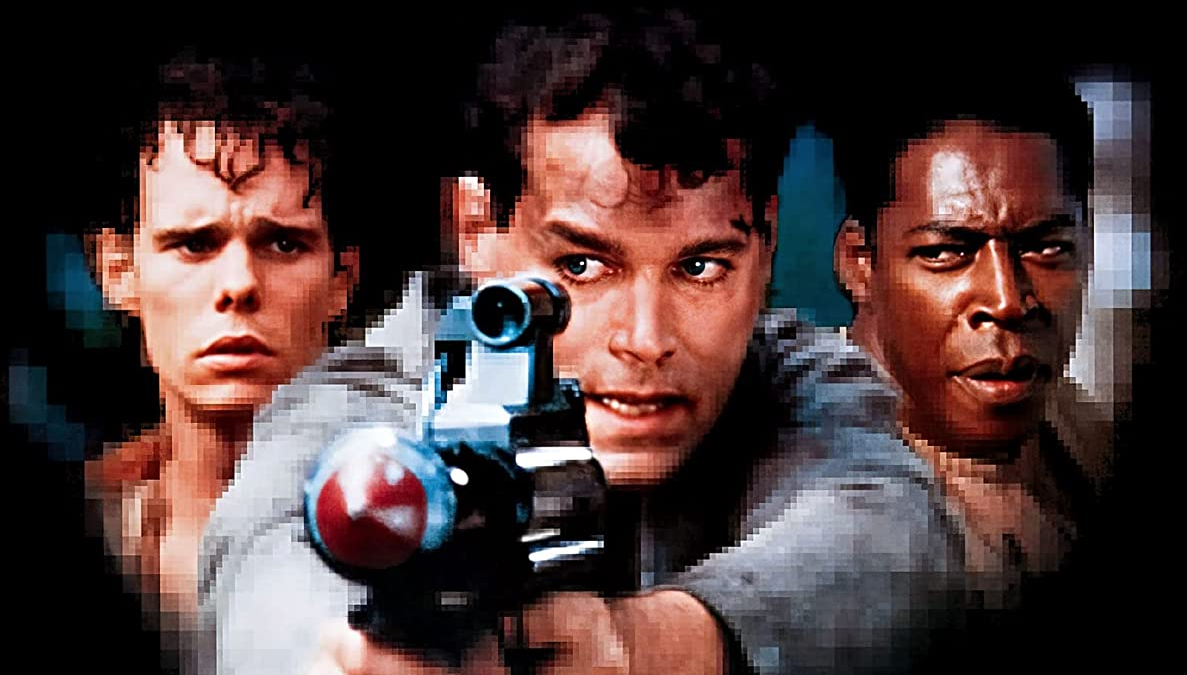 Martin Campbell’s superior futuristic prison action film No Escape finally makes its Blu-Ray debut in the US with a killer transfer and extras thanks to Unearthed Films.

So, how much do I love No Escape?

Well, you have to go back to 1994 and how Lil Adam used to make his own special editions of films… on VHS.  Lil Adam used to record Trailers off of an E! Channel Show (back when they weren’t a gossip reality shill) and Making-of off of HBO and Showtime, appearances of Actors on Leno and Letter or Charlie Rose. Then when a film he loved he’d dub it off of a Laserdisc rental and then he’d comb his VHS tapes to find interviews and Making-of and place them all on one tape … maybe two if the film was longer.

No Escape was one of my Special Editions.

Set in the year 2022, Prisoner and Ex-Marine John Robbins (Ray Liotta) after killing his superior and escape attempts multiple times has been sent to a Level 6 Super Max (6 is the highest they go).  Under the guise of a psychopathic Warden (Michael Lerner), Robbins tests and pushes against the Warden.  Rather than a battle of wills, the Warden sees an opportunity.  Robbins is dropped – literally by helicopter – off on the Island of Absolom.

Absolom is the Warden’s experiment – a place where the worst or best prisoners are sent to fend for themselves.  Marek (Stuart Wilson) runs the vicious gang called the Outsiders hellbent on controlling everything.  The others called the Insiders led by the Father (Lance Henriksen) have built a peaceful group of socialists all striving for better and more.  Robbins’ arrival and eventual escape from Marek’s gang leads to an all-out war on the island and concerns for the Warden’s experiment (it isn’t entirely legal).  Forcing all to do battle – both physical and of the wills – that Robbins plans to use to escape this prison.

The concept of Ray Liotta as an action star was novel until you watch this film.  After you watch No Escape, the question isn’t if he could pull it off but why didn’t they cast him more in this type of role.  There’s a sense of true danger behind everything Liotta’s Robbins does that few of the “action heroes” at the time could pull off.  Robbins is damaged, saddled with PSTD over atrocities he committed which could have been a cliché in another star’s less capable hands.  Liotta makes a meal out of it, imbuing every decision based on this, giving us a full performance rather than a perfunctory ACTION HERO delivery.

The true gift here is Stuart Wilson as Warlord of the Prison Island Gang Marek.  There’s an inherent charm and charisma about him like the Tasmanian devil let loose in an otherwise by-the-numbers sci-fi actioner.  The script and Wilson give Marek the attitude of a Hotel Director – he even admits as much – by way of a serial killer.  The way that Marek approaches both leading his gang and convincing someone to join it with the sort of ruthlessness with a smile is one of the funnier notions No Escape has.  The film is good but it’s even better when Wilson is chewing scenery taking the proverbial piss out of everything.  Marek isn’t just the perfect foil to Liotta’s Robbins.  Wilson quickly endears himself as one of the better villains the 90s had to offer within his opening moments of the film.  So much so, Wilson would end up working as a villain throughout the decade and beyond.

This makes no mention of great supporting turns by Lance Henriksen, Ernie Hudson, Kevin Dillon, Kevin J O’Connor, and Michael Lerner.  All elevate the film with roles that are – yes, archetypes – but written and performed with a sense of intelligence and care.  Much more than some of the films of the era of similar style and genre.

Martin Campbell’s direction along with his one-two combo of – and career-long collaborators – editor Terry Rawlings and Cinematographer Phil Meheux elevate No Escape’s action and visual style to an Epic Braveheart by way of Mad Max on a budget level.  The action scenes are fast, brutal, character-based, and best of all with a huge dollop of wit and dark humor.  Be it the Raiders-style fight between Robbins and Marek’s Director of Activities in the Pool, or Marek’s happily caroling before a raid No Escape makes sure to make you laugh as its bludgeons you.

No Escape is truly an underseen sci-fi action Classic.  One that may surprise with its adroit combination of brutal action and sly deft humor.

This is definitely not the same transfer that Umbrella released in Australia a few years back.  This transfer in every way is an upgrade to that one.  This appears to be a brand-new transfer but couldn’t find any information on it.  The image is cleaner and has a depth to it that other versions have not.  The same goes for the image’s color reproduction, contrast, and black levels.  It’s a gorgeously by Phil Meheux in Australia and for the first time on home video, the visuals feel like they did opening weekend in 1994.  Bravo to Unearthed Films for the work they have done with the film.  Fans and non-fans alike are going to be impressed with the work done here.

“WELCOME TO THE FUTURE: THE SCI-FI WORLDS OF GALE ANNE HURD” (17:08) – is an all-new interview with producer Gale Anne Hurd begins with her love of Sci-Fi and horror at an early age.  Some of the details include how she got her job with Roger Corman, her work on various productions for Corman how it was a training ground for producing, meeting and working with James Cameron, the eventual collaboration between Hurd and Cameron on films like Terminator and Aliens, her production deal with 20th Century Fox and other productions like Bad Dreams, Tremorsand Alien Nation, how she got the book that No Escape was based on, the details of the production and how she developed it, the crazy notion that initially Martin Campbell was thought of as the director of Terminator 2 before Cameron decided to direct it, the casting of No Escape, the decision to film in Australia, the troubles with filming on location – including a crazy note about how dangerous the animals were and it became the biggest challenge, and more.  This is as much a career overview interview as it is about No Escape.

“SURVIVAL OF THE FITTEST: DIRECTING NO ESCAPE” (13:55) – is an all-new interview with director Martin Campbell begins with the director talking about his first films Criminal Law and Defenseless.  Some of the details include how Gale Anne Hurd offered him the job but he turned it down, the casting sessions – including a young Russell Crowe post-Romper Stomper, filming in Australia, how they actually built the Outsiders camp, the development of his “action chops” here on this film, how the ending changed from a huge battle to the iconic sly ending, and much more.

“PENAL COLONY: WRITING NO ESCAPE” (9:46) – is an all-new interview with co-writer Joel Gross begins with how he began his career as a Novelist – of historical fiction – which lead to plays then to screenwriting and being hired by Gale Anne Hurd for another project.  Some of the details include how he approaches developing and adapting a novel into a script, the development of the script and script notes, leaving the project, his reaction to the first screening, and much more.

Making of No Escape (28:02) – this archival featurette actually uses the materials from the vintage featurette below to create a more robust making-of.  The content is considerately edited into creating an informational look at the film.  Not traditionally linear development to preproduction to production.  The featurette artfully intercuts interviews with cast and crew, b-roll footage, and scenes to create a unique making-of.

Vintage Featurette (6:20) – this EPK style making-of featurette is one of the special features that I used for my VHS Edition of No Escape (see my review above).  This fun throwback to the ‘90s is the kind of “fluff” that has a lot of great b-roll and an entertaining look at studio-produced PR.  Includes interview snippets by Producer Gale Anne Hurd, director Campbell, and actors Liotta, Wilson, Hudson, Dillon, and Henriksen.

Alternate Intro (2:10) – the alternate intro/title for non-US releases where it was known as Escape from Absolom.

TV Spots – four 30-Second TV Spots that are their own selectable option in the trailer submenu.

No Escape finally has a Blu-Ray Edition worthy of its greatness.  HIGHEST POSSIBLE RECOMMENDATIONS!