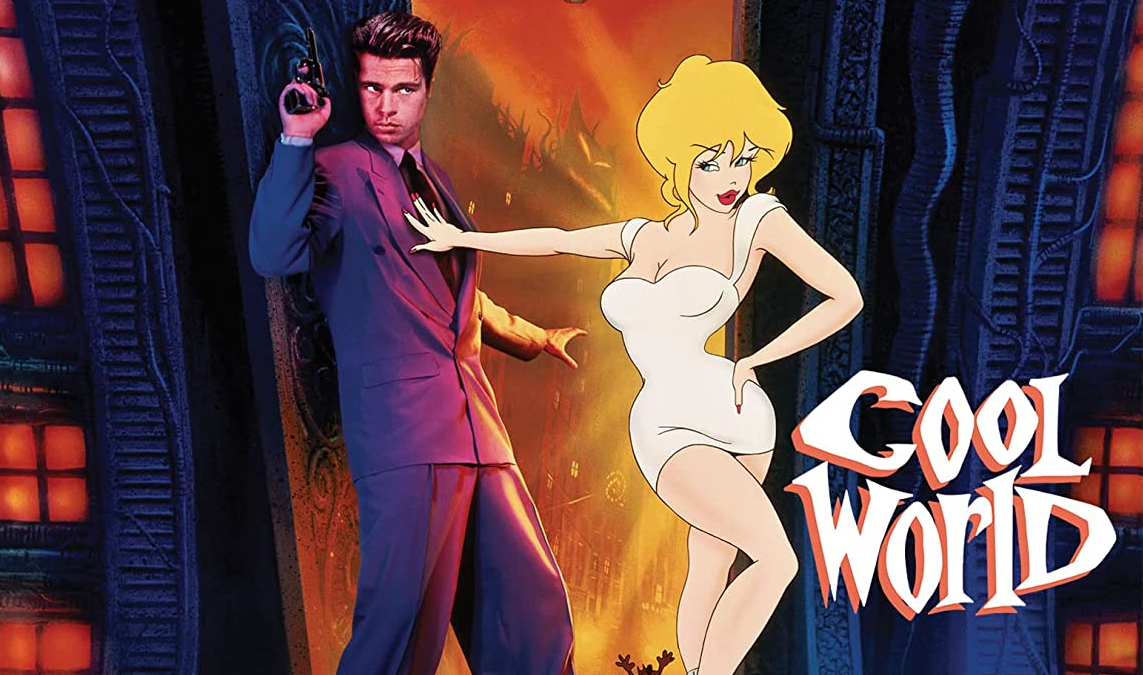 Ralph Bakshi’s Cool World makes its Blu-Ray debut with a new 4K Scan and extras thanks to Shout Factory and their Shout Select Line.

I still remember seeing Cool World opening weekend.  As I left the theater, I was confounded by a film that felt like a contradiction in terms.  The dirtier more aloof strange uncle to Who Framed Roger Rabbit. I had no working knowledge of the ups and downs of director Ralph Bakshi and where he was but it, all the same, felt… off.  Though that didn’t stop me from continuing to be drawn – pun intended – back into the gross world that the film created.

Using all the troupes and clichés of Film Noir, Cool World, adds in a dash of animated clichés as well as a good dash of meta-commentary as well.  The film begins in Post-World War II, Las Vegas with Frank Harris (Brad Pitt) involved in a motorcycle accident that places him in Cool World where Doodles – slang for the animated citizens of Cool World – run amok and occasionally humans do too.

Cut to forty years later and Cult Comic book icon Jack Deebs (Gabriel Bryne) is about to be released from prison.  What’d he go to prison for?  Shooting the dude who was in bed with his wife he caught mid-coitus.  Though the whole murdering thing doesn’t people from loving his work and his creation Cool World.  See at the same time, he’s been magically drawn – there’s that pun again – into the world he thinks he’s created by his most infamous of creations the Femme Fatale Holli Would (Kim Bassinger).

It’s all a ruse for Holli to get Jack to you know… do the deed with her.  If he does, she’ll become human and she’ll be able to get out of Cool World.  The only thing is that she could start the end of both Cool World and Non-Cool World (e.g. live-action world).  Don’t worry Harris is there doing his Mickey Spillane best to get both these characters back on the straight and narrow.

Part of what makes Cool World so fascinating is this was clearly designed to be R-Rated by Bakshi and Company.  Though Paramount had other designs seeing Roger Rabbit dollar signs they chose to cut it at the knees.  Also, they saw it “for kids” and edited it down to the numb.  Not understanding that Roger Rabbit was never intended for kids, and was a full-on film noir that acted as one that just happened to have animated characters and an animated world.  Bakshi through all the editorial mire and muck seems to understand this.

The problem is that there are little to no rules for Cool World.  It’s just created ad-hoc.  At first, it seems like characters cannot enter into Cool World or Non-Cool World without some kind of technodoohickey but that’s later countered because Holli brings Jack in by sheer force of will.  This gets changed multiple times to dictate where the film heads without a reasonable explanation.  There’s no build-up in characters like Jack or Harris and where they are or going they’re just chess pieces moved around the plot board.  This feels more like hacking and slashing more than a lack of a cohesive story. Given Money now to be able to do those things he wanted but with restrictions.  There is a compromise but it also feels like he was straddled with a lot of issues.  It feels like a studio cut at 102 minutes something that may be a 120-minute film wouldn’t have felt so… jarring.

What we are left with are wildly imaginative moments of pure unfiltered Bakshi from The Fritz the Cat era.  The guy who wanted to push the medium.  The spiritual cousin to R Crumb who had specific tastes and fascinations.  There’s a refined grotesqueness to everything in the film aimed at overt sexuality.  Watching the animation not just of the foreground but of the background characters you see hyper-busy and hyper-realized garish characters found in the sleazier Film Noirs of the 40s and 50s.  One need only watch the ambitious finale to understand what could have been if allowed that more unrestrictive rating.

At its end, Cool World is a fascinating piece of Noir inspired lunacy that is on the cusp of dangerous. For those tuned into its very specific vibe… it will soar.

The all-new 4K Scan of the Original Camera Negative, Approved By Director Ralph Bakshi, is another winner from Shout Factory.  The film has never looked as good as it does here.  Having seen the film theatrically in its initial run and having owned and/or rented the various incarnations of Cool World on home video Paramount never gave the film the TLC it needed.  Shout Factory working with Paramount or on their own has course corrected.  The image in return feels more complex, denser in color and contrast, the film grain still intact, leading to an all-around better version of Cool World.  The clarity within the image is improved upon so much one can actually see all of the background gags the animators created throughout the film.  Bravo to Shout for taking the time and care and working with the oftentimes mercurial Bakshi in giving us an excellent edition of the film.

The Wild Minds of Cool World (21:58) – is an all-new making-of featurette.  The making-of covers the original harder R-rated take that Bakshi had and how it changed very quickly, Bassinger’s enthusiasm for the part and the entire movie as a whole, the casting of Gabriel Byrne, the casting and issues with casting Brad Pitt, the trouble and challenges during the production, the animation/live-action hybrid and how it was accomplished, the unique production design of the actual Cool World, working with voice actors, working with the live action actors and how they approached the hybrid, how they got David Bowie, the lack of promotion because of a regime change at Paramount which caused its failure (from their perspective), the film’s rise as a cult classic, and more.  The doc features comments by Director Ralph Bakshi, Actor Kim Basinger, and Producer Frank Mancuso, Jr..

Trailers (3:49) – two trailers are included.  The second trailer, the original Teaser trailer, is a hoot as it includes a voice-over that’s meant to be Gabriel Byrne which is clearly NOT.

Cool World may not be everyone’s bag but for those that it is will find it infinitely rewatchable.  Shout has put together a great package where the picture and sound are top-notch.  Recommended.