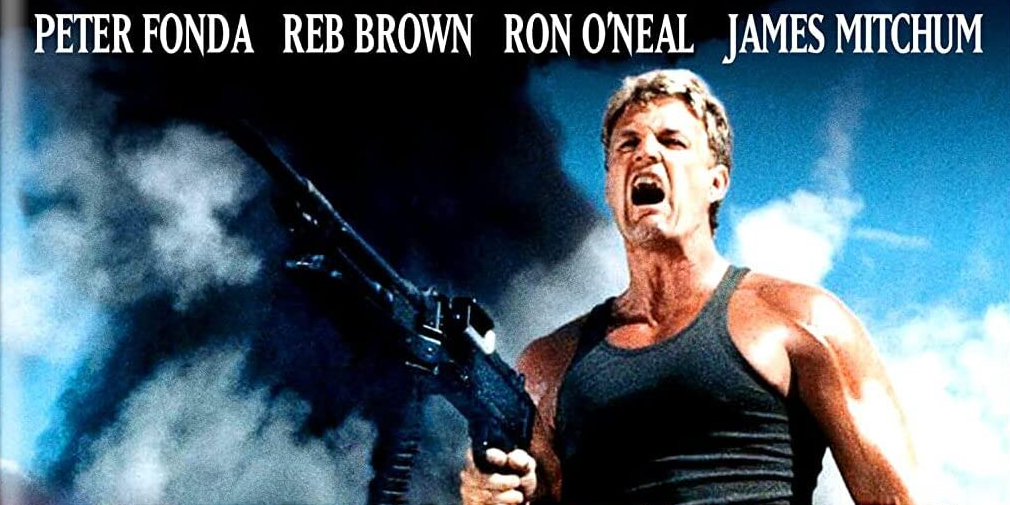 Reb “JAKODA” Brown is back doing what he does best.  Kicking ass in a jungle with his shirt off.  Code Red’s Blu-Ray release of Mercenary Fighters is prime Cannon Films B-Movie Action lunacy.

The late 1980s sure loved the shit out of Reb Brown.  The Strike Commando superstar/legend was a glistening Greek god of man-muscles.  In fact, Strike Commando is probably the reason he got the lead in Cannon Films Mercenary Fighters, Though not the delirious heights of badassery that is Strike Commando (one can hear “Jakodaaaaaaaaaaa” even at the mere mention of the title).  Mercenary Fighters does strive for that “going back to ‘Nam” sub-genre (see First Blood Part II, Missing in Action, Missing in Action Part 2, and Missing in Action Part 3) but in … Africa.  In true Golan and Globus fashion by the end you’re not sure what’s happening or whose side is on who’s but… EXPLOSIONS and ‘MURICA FUCK YEA!!!

Also, in true Cannon Films fashion, the film that feels and even looks like a Back to Nam film is actually set in some fictional African Country where a Warlord.. I mean “President” (Leslie Mongezi) takes command and plans to modernize his country.  As part of that modernization like any good Warlord, he has a right-hand man to do his dirty work.  Col. Kyemba’s (Robert DoQui) dirty work is making sure the indigenous people of the country are removed from the main river of the nation to make way for a Damn.

The Colonel hires a band of mercenaries led by (future academy award winner Peter Fonda) to do the job.  Of course, with a job like this, there’s massive subcontracting.  Enter Reb Brown’s TJ and Ron O’Neal’s Cliff both living it up in the quiet farm and beach community of Oxnard California.  No sooner do they agree that they’re off to Africa and find out why they’re getting paid… It’s only too long before enough is enough for TJ and Cliff.  They need to escape (you thought I would say help the locals… silly you).  It’s a race to the finish for TJ and Cliff as they just want to get out alive.

Even for a Cannon movie, this is some wild shit.  The moral compass is always terrible on an action film but this one may take the cake.  There’s so much blasé attitude about killing and murdering is stunning.  Before anyone says, ‘well isn’t that the point’.  I would normally say yes but this is Golan and Globus.  The guys who loved to make Death Wish movies and Michael Winner movies (I guess that’s redundant as those two things are one and the same).  Though I will give a small amount of credit as the film does relish in the murder and death of these – mostly white – mercenaries.

If one is actively watching Mercenary Fighters, they will likely find it agreeable with explosions and action scenes aplenty.  Those that actually pay attention will find a film that’s as weird and morally inept as was produced by Cannon Films.  It’s as entertaining and shocking in equal measure as Peter Fonda’s ponytail.  A lot more entertaining.

Send the kids to bed.  Wait till the wife’s asleep.  Crack open a Coors.  Turn on Mercenary Fighters and be ready to be stunned.

Just realize the stunning is not necessarily what you think it is.

The Brand New 2K Master wonderfully reproduces the 35mm image to Blu-ray.  The sharp handsome image shows no signs of age or defects.  The transfer is a beautiful representation of the film.  There are a few specks or dirt but that is to be expected from an older film finished photochemically – as was the case here.  Strike up another win for Code Red.

Mercenary Fighters is as entertaining as any Cannon-produced action film of the era.  Recommended – for that Z-Grade Action Fan or the cult of Reb Brown!!!