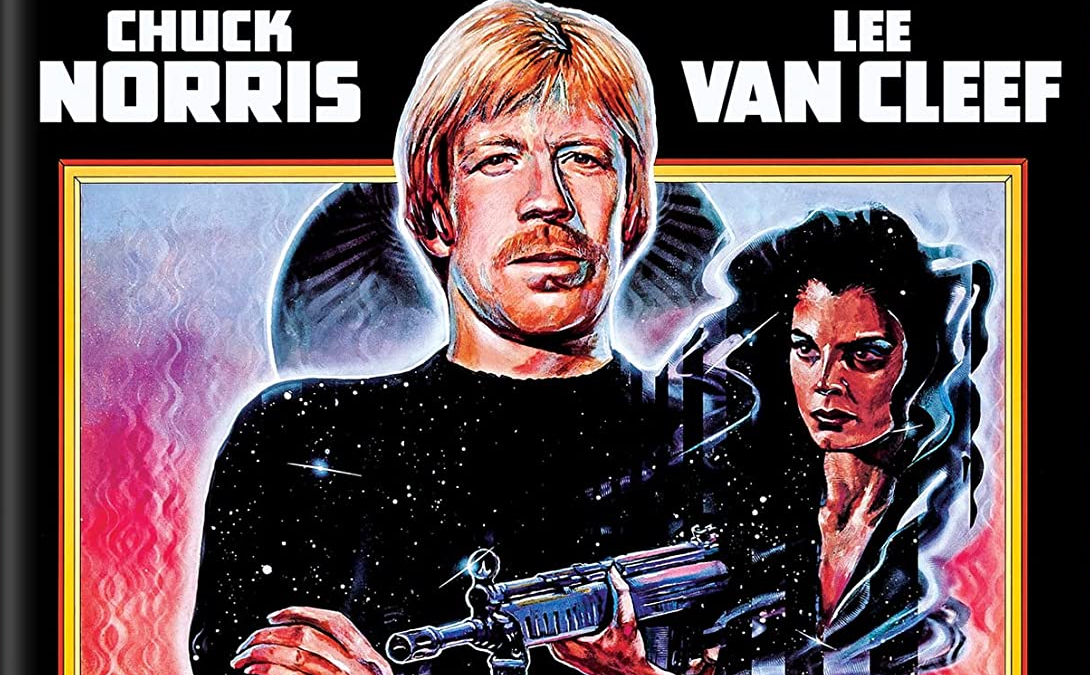 Chuck versus Ninjas.  That’s all you have to say about The Octagon.  Oh yeah, and Lee-mother-scratching-Van-Cleef!!  New to Blu-Ray from Kino Lorber.

First, there was Good Guys Wear Black.  Then there was A Force of One.  The last and the best of the bunch The Octagon is where they figured it all out and created the first truly badass entry into the Chuckography (patent pending).

Scott James (Norris) is trying to live his life peacefully as a fighter (as much as one can) and not reengage with his life before.  That doesn’t last long as he’s brought into a world he’s left behind.  The life of the ninja!  His old merc buddy McCarn (Lee Van Cleef at his saltiest minus EFNY) can’t see this as anything but a win-win.  As does Rich Society type Justine (Karen Carlson).  As he swirls deeper and deeper into the murky waters of his past we begin to realize as does James there isn’t any turning back.  With the help of McCarn, friend AJ (Art Hindle), and a lovely but deadly double agent (Carol Bagdasarian) he is able to take down his brother Seikura (Tadashi Yamashita) … which leads to the final confrontation in – THE OCTAGON!

The fun of the entire enterprise is just how seriously The Octagon takes itself.  How serious?  Deathly serious.  You don’t cast Lee “mother scratching” Van Cleef as your grizzled take-no-prisoners merc unless you plan on making this a dramatically dramatic affair.  There are twists, turns, pathos, more twists, more turns, NINJAS, family betrayals, friendship, sex, martial arts, and more NINJAS!  All with the kind of dead-eye-stare soberness you come to expect from early-era Chuck films.

It works.  It works smashingly well with director David Karson understanding the kinetics of action and the movement of story and plot enough to ensure that the film’s 103-minute runtime moves.  It does help that surrounding Norris is a cast that includes and aforenoted Van Cleef and Hindle but also Richard Norton, Japanese martial arts legend Tadashi Yamashita and John Fujioka along with cameos by Tracey Walter and Ernie Hudson.

The film is as slick as an early 80s martial arts action spectacular can be including a great silencer shootout with Van Cleef in the middle and of course Norris being put through the paces in THE OCTAGON!  This is definitely the best of early-era Chuck Norris vehicles.  You can put The Octagon right next to Code of Silence as top-tier early Chuck-entertainment.

The Brand New 2K Master of The Octagon is the best of the recent releases by Kino Lorber Norris film releases.  The sharp image shows off the great cinematography, including the nighttime climatic battle.  All in all, though the image is an upgrade in every way to put The Octagon’s best foot forward.

The all-new Audio Commentary by Action Film Historians Brandon Bentley and Mike Leeder is essentially a continuation of their comments from A Force of One and opens with a summary of how they got to the film and its success.  Some of the details include a discussion of Ninjas in cinema because they feature so prominently in The Octagon, the hair of the 1980s – including Chuck Norris, the Star persona of Chuck Norris and how it was and wasn’t a part of this film, a discussion of the various films that he did before this, a discussion of legendary Japanese actor Tadashi Yamashita, a discussion of Norris turning down American Ninja multiple times, a discussion of the legend Lee Van Cleef, the nun chuck and its censoring in UK, which leads to a hilarious personal anecdote by Leeder how he created the Conan Crom Sword in his metal works class, discussion of Art Hindle, a great fact that Leeder helped with that amazing Raid 2 car chase, a discussion of screenwriter Leigh Chapman and her career in and out of writing, a discussion of Chuck Norris’ acting abilities that leads to a larger discussion of the acting abilities of action stars and their development as performers, a discussion of director Karson and his career after The Octagon, a side conversion about “International Versions”, a conversation of the “white dudes doing martial arts” of the 1980s and 1990s, the work of Richard Norton here and in other films – fans of Mad Max: Fury Road will know as it’s stunt coordinator, a discussion of the character actors and supporting actors in the film and how they’re interesting and not “beautiful” and how much that has changed, this leads into a side conversation about Leeder having to bodyguard a star in the 1990s in Hong Kong, the later success of Norris in his 40s and 50s, a hilarious discussion about jeans and martial arts, a conversation of Aaron Norris and his work on the picture and throughout Chuck’s career, a great anecdote about Ironman 3 and an unseen action scene Leeder helped shoot, and much more.  Leeder and Bentley provide another hilarious, entertaining, and informative commentary track.

The archival Audio Commentary by Director Eric Karson opens by discussing the opening scenes and ties to the theatrical structure of the script.  Some of the details include his interests in the film and why he directed the film, his obsession with terrorism and terrorists – by his own admission and excessive discussion of them during the track, the ambassador assassination that was tied to a real-life incident in LA with the Turkish ambassador being assassinated, the last minute casting of Karen Carlson, and more.  Karson’s track does have a lot of describing what’s on screen but he does give out some good anecdotes about the production.

The Making of THE OCTAGON (39:24) – the longest of the making-of’s between A Force of One and Good Guys Wear Black.  Some of the details include the finding of the script, the financial situation that allowed them to make a bigger budget film, the opening title sequence, the production, the casting, the score, and more.  With comments by Producer Alan Belkin, Producer Joel Freeman, Director Eric Karson, Executive Producer Jean Higgins, editor Dann Chan, and others.

TV Spot for the double feature of A Force of One/The Octagon (0:31)

The Octagon just kicks ass on every level.  Highest Recommendations!!!

Kino Lorber’s Blu-Ray Edition of The Octagon is out now.