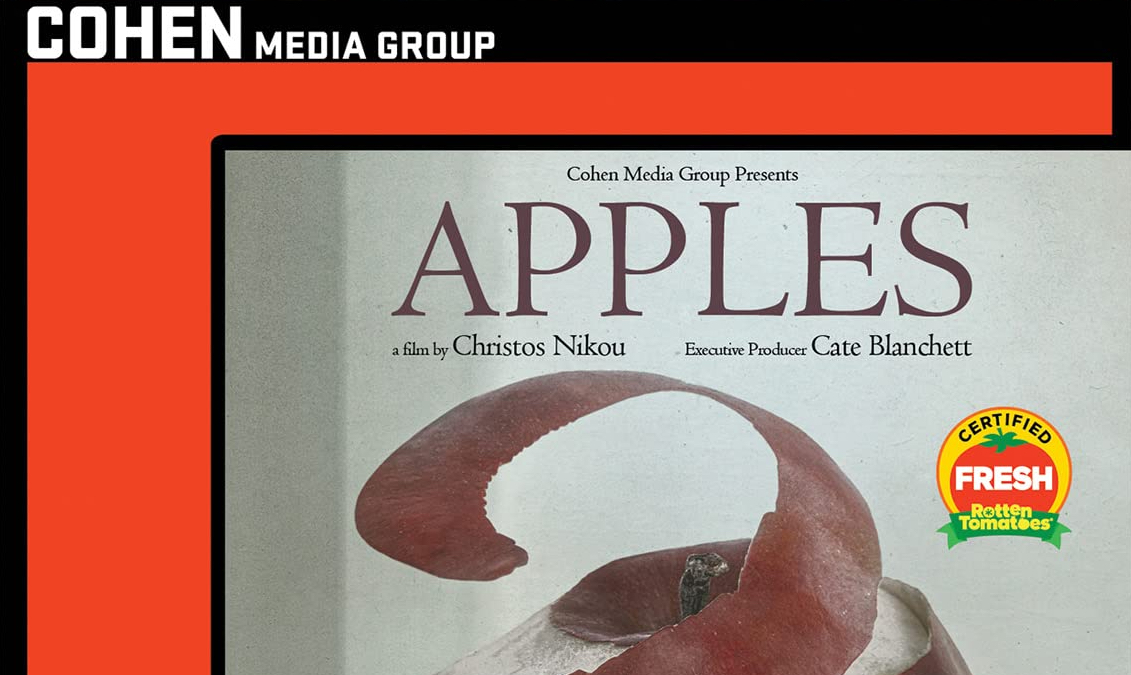 Apples is a film for our pandemic-afflicted times.  New to Blu-Ray from Cohen Media Group.

Starting with a great premise, Apples seems to relish the morose and unexplained nature of the concept and does little else with it.  Director Christos Nikou’s film is beautiful albeit empty.

As the world deals with an unnamed viral pandemic that strickens people suddenly with complete memory loss.  Aris (Aris Servetalis) while walking right outside of his apartment is hit with said unnamed virus.  Taken to a triage center that helps people begin again and find their way back to their homes attempt to help Aris.  Aris goes about adjusting to his new life without any of his memories or self.

Part of the issue with Apples is the lack of narrative drive.  The film is a character piece with no drive or motion.  Aris goes from one setting to the next baffled by everything and everyone he interacts with.  There isn’t any drive from the character or reaction to his situation.  Just a steady baseline of unaffected looks at people who are reacting to this issue.  One wishes that at the very least we understood Aris’ actions beyond his zombified sleepwalking through the streets of Athens.

Beautifully photographed in Academy Window Box (1.33 for you cinematography fans out there) by Bartosz Świniarski the film is more of a travelogue look at modern Athens.  The camera glides in and out of situations always in complete control and distanced from Aris or any other characters that come into frame.  Swiniarski’s refine work here will no doubt get him more work moving forward as Apples is visually accomplished and refined in a way few films are let alone the second feature-length by a cinematographer.

Apples is a visual accomplishment for co-writer/director Nikou but one wishes that there was more hefty to a concept that definitely requires it.

Cohen Media Group’s delivered a wonderful transfer of this hauntingly shot film.  The Blu-Ray version of the film lensed by Bartosz Swiniarski is a perfect representation of the image.

Taika Waititi in conversation with Director Christos Nikou (34:13) – this Zoom Q&A done with the two directors.  Waititi is his usual comedic self, beginning with a hilarious camera setup that was supposed to invoke the imagery of Apples (watch the film before this).  Some of the details include how Blanchett got involved as Exec Producer and showed Waititi the film, his work as an AD for Richard Linklater on the last Before movie, the development of the film and the personal incidents that prompted the film, a great conversation about knowledge vs information and the loss of memory, how they took social media, experiences, and other real world incidents to make some of the tests in the film, the showing of the film theatrically, and much more.  Note that the Zoom image and sound isn’t the greatest but shouldn’t deter from the wonderful conversation between the two directors.

A Conversation with director Christos Nikou and Executive Producer Cate Blanchett moderated by journalist Anne Thompson (28:16) – this Zoom Q&A with the trio is an informative artful discussion of the film and its themes.  Some of the details include how Blanchett got involved as it played at Venice (not in competition), the lack of technology in the film and how it was designed into the film, a discussion about how his film had become very relevant with the rise of COVID Pandemic (his film was written and directed BEFORE), a discussion about lead actor Aris Servetalis and his dancing background informing his performance, taking inspiration from Jim Carrey’s dramatic performances, Blanchett’s impressions of the film when she first saw it, a personal discussion of her father, a discussion of the larger theatrical experience, and much more.  This Zoom conversation is much better than the one with Waititi and Nikou with regards to audio and visual quality.

Apples is a beautifully shot film that has been expertly transferred to Blu-Ray.   Recommended.